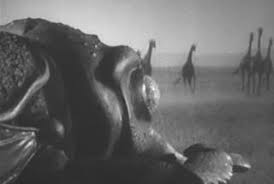 The ultimate goal of film criticism is, I suppose, is to come up with an objective statement about a given film. Impossible as this is, it is difficult to write about film without participating, to some extent, in that futile quest.

Below are three monster movies which have been brought into my life by Freeview channel Talking Pictures TV, and they are bad films. And if a bad film is, as I have suggested, an impossibility, well then so are the monsters.

The title is definitely the best thing about this one from director Kenneth G. Crane. Jim Davis (later Jock Ewing in Dallas) is American scientist Dr. Quent Brady, who sends some wasps into space only for them to come down in Africa, where, having been exposed to ‘cosmic radiation’, they grow to enormous size and proceed to create what is ominously referred to as ‘trouble in the interior’.

If all this seems implausible, Dr. Brady has a chilling rejoinder for you: ‘You’ve seen pictures of the survivors of Hiroshima haven’t you? Radiation did that.’ Nothing remotely frivolous then, about these wasps, which don’t look much like wasps at all, or any other living thing, being impersonated, for the most part, by puppets with oddly tiny wings. But they are substantial enough to send stock footage of giraffes fleeing in panic across the savannah.

A large portion of the film is devoted to Brady and co’s slog through Africa, made all the more authentically dreary by Davis’ plodding voiceover (‘A week went by, and then another.’) Even when they do get to the wasps they fail to destroy them and end up getting lost in a cave, emerging to discover that an erupting volcano has done the job for them (presumably the wasps were unable simply to fly away, due to their small wings). ‘Nature has a way of correcting her own mistakes’, someone says, with just a faint suggestion that the film might have been one of them.

However, the native character, Arobi (Joel Fluellen), ends the film by drawing the moral that all we need is faith (‘the gods have been kind’), and here is the real point – the whole thing has been a test of faith, for the viewer as well as for the characters. But only the characters are rewarded for hanging on in there.

But we have at least learned that science and religion are not incompatible – and neither are giant monsters and boredom. These themes are continued in The Giant Gila Monster, directed by Ray Kellogg, who also brought The Killer Shrews to the world. They were greyhounds in disguise (a shorter-legged breed might have worked better, but beggars can’t be choosers) while the GGM is an ordinary gila monster plodding around diminutive sets, looking unconvinced.

Why doesn’t anyone notice me?, it seems to be thinking. Indeed, it’s a good hour before anyone in the small US town being ‘terrorized’ thinks to blame a spate of car wrecks and disappearances on a giant lizard, and even then it takes a train crash to convince them. That hour is spent in the company of the decent God-fearing townsfolk – even the local teens are alarmingly wholesome, giving rise to what might be the film’s most startling sequence, where our teenage hero Chase Winstead (Don Sullivan) serenades his crippled sister Missy with a song whose chorus goes: ‘And the Lord said laugh children laugh…’

Nobody does. Not even when he delivers another rendition to a barnful of fellow teens at a dance. Although this performance is interrupted by the appearance of the GGM poking its head through the wall.

The song mentions the Garden of Eden, and it is tempting to see the film as a religious allegory, with the GGM as the serpent. The small town depicted here does seem fairly idyllic (ie; dull) with its ‘hilarious’ town drunk (Shrug Fisher) and its clean-cut youth – the only bad apple is the rich guy, Mr. Wheeler (Bob Thompson), who keeps berating the sheriff and threatening to take his job, but then he has lost his son to the GGM, and at the end he is merely humbled rather than, say, blown up or eaten.

But I shouldn’t get carried away about this religion thing. Of course there is a scientific explanation for the monster, something to do with the pituitary gland, which is recounted by the local sheriff, in lieu of any other available experts. He puts forward as supporting evidence the story of a woman in the Ukraine who gave birth to a child which at ten months old was taller than her. Maybe they should have made a film about that instead.

Quite early on in this a quantity of nitroglycerine being stored in an outbuilding is mentioned, so the alert viewer will have been counting down the minutes until it is used. It feels like quite a few minutes, since the film seems to take its leisurely pace from the GGM itself, but eventually the hero drives a hot rod full of the stuff right into the monster.

The religious overtones are not entirely dispersed even then. The creature expires in what could be hellfire – and the hot rod is the hero’s own, which he has been working on lovingly throughout the film, and thus it represents a sacrifice. But it’s fair to say that this is no Winter Light.

The hero of The Giant Gila Monster has a French girlfriend, (Lisa Simone) – she worries about being sent back there, as though it is some kind of primitive hellhole. A Frenchwoman also turns up in Gilbert Gunn’s The Strange World of Planet X, suspiciously enough. But it may be that the foreignness of these women works as a kind of gateway to the greater exoticism of giant monsters (a strategy not required in Green Hell, of course since that was meant to be happening in Africa). Either that or they just thought French girls were sexy.

Here Gil Graham (Forrest Tucker) assists with experiments in magnetism conducted by a maddish scientist in an English village, where their main effect, initially, is to interfere with the TV in the local pub and stop its clock (a boon to customers hoping for the postponement of last orders).

But of course it isn’t long before they destroy a portion of the ionosphere causing good old cosmic radiation to come through and have its well-known effect of enlarging insects and spiders (rather than, say, squirrels or ducks, which would have been silly.) A further complication is supplied by the appearance of of the mysterious, yet benign, man calling himself ‘Mr. Smith’ (Martin Benson), who is in fact an alien from newly-discovered ‘Planet X’, and here to put a stop to these experiments, which have been ringing interplanetary alarm bells.

Meanwhile Graham is getting it on with a newly-arrived female scientist, relieved that she is not the ‘frustrated spinster’ he had envisaged but instead the previously mentioned Frenchwoman, the young and attractive Mlle Du Pont (Gaby André), though you might think that the frustrated spinster might have made a better match for Tucker, who is no spring chicken.

Mlle Du Pont’s main function is to get caught in a giant spider web while trying to rescue another young woman, who is trapped in the schoolhouse while giant insects loom outside. However she does at one point offer some surprising expert advice to a young mother whose daughter has discovered a giant egg in the woods. ‘Boil it!’, she says – though not before ascertaining beforehand that she has a large enough pan.

This might be the least bad of these bad films since scientifically it is comparatively rigorous (it’s based on an SF novel by Rene Ray), but although I rather liked the idea of an English wood overtaken by outsize creepy-crawlies they are not very well realised, just the real thing magnified. Thrust into the spotlight unprepared, they struggle to express any sincere interest in devouring the cast, and seem to be living in another world themselves. It would have been fun to see Dandy Nichols (who plays one of the locals) confronted by a giant earwig, but she just stays in the pub, getting increasingly belligerent.

Eventually a bunch of squaddies turn up and slaughter all the giant insects, rather giving the impression that they do this sort of thing all the time, while ‘Mr. Smith’, who is the closest we get to God in this movie, makes sure that the maddish scientist, who has only gotten madder, is destroyed along with his device.

We never visit Planet X, but ‘Mr. Smith’ suggests that from its vantage point, Earth itself looks like ‘Planet X’, thus turning the Strange World of the title into our own planet, and saving on budget. More to the point, it’s England that represents ‘Planet X’ here, and here, perhaps, is the most useful moral that we can take from this – that England is a foreign country, just like France.