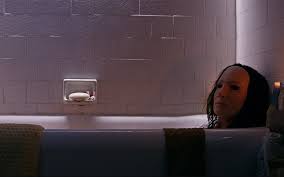 Frightfest is now ‘owned’ by Arrow Video, which makes sense. The only difference I could see was that there were a lot of free DVD’s lying around, which I certainly wasn’t complaining about (I’ll save that for when I watch them).

The first two films were happening in one of Cineworld Leicester Square’s ‘Superscreens’, which is their version of the Imax I believe. I haven’t had much experience of this sort of thing but from what I have seen this technological leap forward has a similar vulnerability to Jeff Goldblum’s teleportation device in The Fly – namely, the fly.

Certainly the characters in The Cleaning Lady were (unknowingly) harassed by such a creature – or rather, the shadow of it – which hovered about them from time to time. Maybe some cleaning needed to be done in there.

Luckily Jon Knautz’s film (co-written with its star Alexis Kendra) is involving enough to make such distractions irrelevant. Building slowly and carefully, it milks its premise for all its worth. Kendra plays Alice, a self-confessed ‘love addict’ trying to wean herself off a married man (Stelio Savante), who comes home one day to find a woman with a severely burned face lurking in her bathroom. Turns out she’s Shelley (Rachel Alig), the janitor; taking pity on this quietly-spoken, socially awkward woman Alice gives her a job cleaning her apartment.

It’s a decision that, as well as being fateful, has an ambiguous character right from the start: this may be Alice’s way of ‘reaching out’ to Shelley, but does the fact that she is, in a sense, dehumanised make it easier to ‘use’ her?

As it turns out Shelley is more than dehumanised ‘in a sense’, having been pimped out by her crazy mother as a teenager – it was one of her ‘customers’ who caused her disfigurement by throwing cooking oil in her face when she reacted badly to his attentions. Now, not exactly putting it all behind her, she’s keeping her mutilated mother in the garage and feeding her liquidised rats.

Alice’s friendly overtures to Shelley, which include teaching her how to use make-up, only stir up buried feelings which might better have been left undisturbed – better for the characters that is, not for the audience. From stealing her jewellery and spying on Alice in the bath, Shelley moves on to wanting to ‘become’ her, even making a mask of her face while she’s lying in (chloroform-assisted) slumber.

But while the film increasingly makes Shelley into a ‘monster’ our growing understanding of her background humanizes her at the same time. It is Alice – obsessed with health and beauty, working away at her surfaces, yearning to become a thing worthy of being used by her lover – who is oddly dehumanized. ‘You look like Barbie’, Shelley tells her, and she takes this as a compliment.

Both leads are excellent, Alig in particular conveying mute suffering and menace without seeming to do very much at all.

In the end both the married man and his wife (Elizabeth Sandy) are drawn into the maelstrom, as Shelley decides that the only way Alice will get over her obsession with Savante is by making a clean break with him – well, perhaps not so clean, but Shelley is more than capable of handling the mess that results.

Alice ends the film chained up in Shelley’s girlhood bedroom, forced to impersonate Shelley’s ‘perfect’ teenage self, before the men came and the cooking oil was thrown, while Shelley gawps at her through the window. This haunting image neatly enacts the difference between them – with her self-help groups and beauty treatments Alice really believes that it is possible to become ‘perfect’, whereas Shelley, ultimately, knows that this is an illusion – just not one she can look away from.

If The Cleaning Lady is a slow burn (sorry) Mitzi Peirone’s Braid is more of a flash fry, but if it turns out a little bit raw that’s not such a bad thing. These kitchen metaphors might seem unfortunate for a film with a decided feminist streak – or perhaps just unfortunate – but in fact Braid seems fascinated by the notion that the domestic sphere is still the only one in which women are able to wield real power.

Petula (Imogen Waterhouse) and Tilda (Sarah Hay), two young women hiding out from the police after a drug deal goes awry, hole up in a mansion occupied by their unstable childhood friend Daphne (Madeline Brewer), who can only relate to them through an old childhood game in which she is the sadistic mother to Tilda’s daughter, with Petula playing doctor.

As with Darren Aronofsky’s Mother! (which would have made a good title for this) we are aware pretty much right from the start that things in this film are not quite ‘on the level’, but unlike with that film you don’t automatically get the sinking feeling that you know what it’s up to. Quite the opposite in fact – the film’s shifts between the game and ‘reality’ (further confused by Petula and Tilda’s use of mind-altering substances) are often jarring and confusing but at the same time there’s an energy and a disrespect for genre convention that’s quite exhilarating.

Daphne is condemned simply to play the mother because of a childhood accident that left her unable to conceive – Petula and Tilda were partly responsible for this and so their return to Daphne’s world is motivated by guilt as well as their need to hide. When Daphne grows increasingly violent they contemplate escape without ever quite managing it, though the extent to which Daphne is actually keeping them there against their will is never clear – the game may be something they are caught in but its twists and turns allow them a certain amount of freedom as well.

Indeed, when the outside world bursts in in the form of a police officer (Scott Cohen) brandishing a gun, what he finds is Daphne on a makeshift operating table apparently at the mercy of the two outlaws she has unwisely consented to shield. However, when he ‘rescues’ her from them Daphne rewards him by stabbing him in the back, and together they proceed to cut him to pieces.

This scene and the later one where they push the police car into the lake have a definite transgressive charge. They represent a final refusal to play the ‘games’ forced upon them by the outside world and initiate a final retreat into their childhood idyll… or do they just kill themselves?

Well let’s just say it’s more about questions than answers. Is this film chaotic or – as the title suggests – intricately structured? Is it dazzling or bewildering? Or is it, in each case, both? It’s fair to say, I think, that it doesn’t ‘work’ in a way that delivers an effective build-up or well-paced shocks – but that’s just the point: it doesn’t work, it plays.

Nicolas Pesce’s debut film Eyes Of My Mother was a critical success, and also a film which, funnily enough, The Cleaning Lady looks like it owes a small debt to. I didn’t enjoy it, it says so on here somewhere, but all those critical plaudits make me wonder – what if I was wrong? What if I was just having a bad day?

Troubling as it is to contemplate such possibilities, I wasn’t inclined to actually watch the film again, but I was prepared to watch this, Pesce’s second film. For a start I was intrigued (as with Braid) by the poster, which seemed to promise a crazy, queasy comedy. Which is about what we get, I suppose.

It is based on a novel by Japanese writer Ryu Murakami, who wrote the novel on which Takeshi Miike’s film Audition was based. The transition to a US setting is managed very well, with the material filtered through the perspective of another ‘foreign’ influence – the giallo, complete with all the traditional accoutrements: black gloves, split screens, score selections from Bruno Nicolai etc. This proves a perfect fit, and further distance is provided by the fact that the apartment buildings we see from the outside are models, somehow both quaint and faintly sinister.

The film starts with Christopher Abbott approaching his baby with an ice pick, before being distracted by his wife (Olivia Bond). It seems fair to say that he is having a little trouble adjusting to the new arrival and his way of dealing with this is by planning to go out and kill a prostitute, an act he is so neurotic about that he obsessively practices it in his hotel room beforehand, even down to the dismemberment of the imaginary corpse in the bathtub, in scenes that are kind of funny, kind of disturbing.

But when the prostitute, Mia Wasikowska, does arrive she seems to want to play any role other than that of victim – his victim anyway. After her initial sexual advances fail to come off she shuts herself in the bathroom and starts stabbing herself in the thigh – then, when Abbott takes her to hospital, she seems to fall in love with him before, back at her own apartment, revealing her own sadistic streak.

Her inconsistency as a character comes across as conscious playfulness (not unlike that on display in the indoor games of Braid) in contrast to Abbott’s character, who struggles to occupy the one role he is trying to play. Finally it all becomes a kind of sex game (without the sex) with its own spontaneously-occurring safe phrase (‘Can we eat first?’).

It’s a witty, well-acted pas de deux, simultaneously intimate and chilling: a very Lacanian take on desire, on the impossibility of getting what you want (there’s even a Lacanian ‘Thing’ in it that comes crawling out of a bath tap – I think it was – in a dream.)

But you don’t need to know that – isn’t the giallo niche enough without bringing Lacan into it? This works with an audience, judging by the spontaneous round of applause it got, the first of the day in fact, (not that anybody from the film was around to hear it). I found Eyes Of My Mother neither peculiar enough on the one hand nor real enough on the other, but this constructs its own space with one foot in the real and one in the abstract, and in it the central (non-) relationship works very well. And surely the applause means I must be ‘right’ on this occasion.

I should probably watch Eyes again though. Although I just reread my review of it from 2016 and found it quite convincing…. And, let’s face it, we left ‘right’ and ‘wrong’ behind a long time ago.