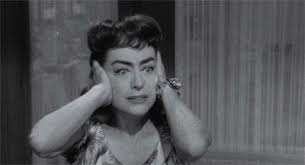 Winding up the Joan Crawford season at the BFI was this William Castle production from the trashier end of her spectrum, though compared to Trog (1970) it’s a masterpiece. The audience have come over-determined to giggle at a camp classic, and to be fair their expectations are to a large degree met as Crawford’s Lucy Harbin succumbs to a fit of rage on finding her husband in bed with another woman and decapitates them both without even waking them up (though she does wake her young daughter, who witnesses the atrocity).

I’m no expert on these matters but I’m not sure that it would be quite as easy as it is portrayed here to decapitate someone lying on a bed with one swift stroke of the axe. Wouldn’t you need a harder surface than a mattress? Well anyway it has happened, and Lucy has to pay for it, emerging from an 20 years of incarceration in an asylum into the care of her brother and his wife, plus daughter (now Diane Baker), all of whom seem eager to let bygones be bygones, while keeping a wary eye on any sharp objects in Lucy’s vicinity.

It’s a rocky road back to sanity, however, as Lucy (apparently) hallucinates severed heads on her pillow, (definitely) makes drunken advances to her daughter’s boyfriend and altogether fails to make a favourable impression on his well-to-do parents, Mr. and Mrs. Fields (Howard St. John and Edith Atwater). Naturally it isn’t long before the axe starts to see some action again, dispatching a visiting doctor and lurking handyman George Kennedy. Although we don’t see the shadowy assailant, who could it be but Lucy?

Well we probably shouldn’t overlook her daughter, who is indeed the killer, and has long brooded over a plan to murder her potential in-laws (who she – correctly – fears will never let her marry their son) while dressed as Lucy and blame the murder on her. To this end she has naturally been careful to keep her mother in a state of mental instability using fake severed heads etc. and as a coup de grace she even has a Joan Crawford mask to wear while offing her reluctant in-laws. It’s like she’s thought of everything, except the fundamental idiocy of the whole thing.

In truth the film works better if you already know that she is up to no good; it reveals her slightly dazed sweetness to Lucy as a thin mask over psychosis. Because although her murder plan is calculated she is clearly unhinged, and is last seen stabbing the Joan Crawford mask while muttering about how much she loves – no hates – no loves – her mother, over and over again.

The film saves its daftest scene for the end, where Lucy goes back over the plot explaining how everything that happened was her crazy daughter’s fault. It is here, giving this sober ‘rational explanation’ of basically ludicrous events, involving fake severed heads and hidden tape recorders, that Lucy truly sounds insane, as though the film’s improbable plot were her own paranoid fantasy. (The scene would have made an interesting coda to Mommie Dearest.)

But perhaps the murder plot works better when seen as a folie à deux, with the two women secretly conspiring to evade the ‘strait jacket’ of female gentility through madness. It was, after all, presumably the sight of Lucy’s axe-wielding antics that sent her daughter over the edge in the first place; and at the end, Lucy – guilty over years of neglect – volunteers to join her in the asylum, to take care of her.

Crawford plays the trashy good-time girl (bracelets jangling) Lucy was, and the tremulous ex-inmate she becomes with equal aplomb. It’s a classy performance in a vulgar film (though to be fair everyone else here is pretty good). But to the extent that the film is on Lucy’s side it is also on the side of vulgarity – one has the distinct impression that in Mrs. Fields’ eyes, being an axe-wielding maniac and being lower-class are pretty much the same thing.

Not that the audience is meant to be cheering the murderer on exactly – but the underlying notion that Lucy and her daughter are taking a joint revenge on ‘respectable’ society lends additional vitality to what is already one of William Castle’s livelier films. There’s a great overhead shot of Crawford succumbing to a panic attack in the powder room at the boyfriend’s parents’ house, whose striped wallpaper suggests prison bars. This sums it all up really – good taste is the real strait jacket, and the film wriggles out of it with alacrity.

One of the torments visited upon Lucy in Strait Jacket is the sound of children singing a version of a familiar rhyme: ‘Lucy Harbin took an axe….’ How fortunate that Lucy’s name is so similar to that of the well-known Lizzie Borden – it’s almost as if screenwriter Robert Bloch planned it that way.

The real Lizzie, who murdered her stepmother and her father in 1892, is the subject of Craig William Macneill’s new film, showing at the Cine Lumiere as part of the London Film Festival. While this is more restrained than Strait Jacket, as befits its basis on ‘true events’, it also sets up something of a folie à deux by suggesting that Lizzie (Chloë Sevigny) was in cahoots with Bridget the Irish maid (Kristen Stewart), with whom she was in a relationship (although Bridget finally can’t go through with the killing assigned to her).

The element of folie is not so pronounced here, however, as the crime is a cold-blooded one – it’s suggested that the reason Lizzie kills her stepmother first, many hours in advance of her father, is so that the deaths conform to certain legal requirements that will safeguard her inheritance. Then again we can argue that this cold blood is itself a kind of madness, one that is endemic here.

It’s clear from the beginning that we are in a household from which love has departed, possibly at around the time Lizzie’s mother died (Lizzie routinely calls her replacement, played by Fiona Shaw, ‘the old cow’). Now all that’s left is money, and Lizzie’s seems to be at risk from some dodgy arrangement her father is making with his shady brother.

Although she leads a reasonably independent life, venturing out alone to the theatre (albeit to widespread disapproval), Lizzie is aware that she is nothing in this society without money, so perhaps we can say that there is an element of self-defence to the murders – and if so the self she is defending is a revised one awoken by her new-found love.

She is also in a sense avenging Bridget – or encouraging Bridget to avenge herself, since Lizzie’s father (Jamey Sheridan) has been visiting the maid’s bed after dark, with Bridget – as an employee – having little choice but to submit to his attentions.

But does this make our Lizzie some kind of ‘feminist heroine’? I’m not so sure – an anti-heroine maybe. I don’t think we are necessarily meant to be cheering her on – the film itself is too cold-blooded for that, and therein lies its strength. Bryce Kass’s economical screenplay sets out the power relations at work in this household with stark clarity, while Macneill’s understated direction gives the claustrophobia room to accumulate. The lesbian relationship is the most potentially melodramatic element here, but here too the approach is restrained and it remains a (plausibly) awkward, fumbling thing.

There’s a telling moment when, having seen Lizzie and Bridget enjoying a furtive sexual encounter, Lizzie’s father (Jamey Sheridan) calls Lizzie ‘an abomination’, and Lizzie drily responds that at least this puts them on ‘an equal footing.’

But she wants more than equality – she wants to be more monstrous than her male oppressors, and she finally achieves this when, in prison, she gets her uncle (Denis O’Hare), who has threatened her previously, to (tacitly) admit that she now frightens him. Sevigny’s excellent performance suggests the seething depths of passion and resentment that ‘civilization’ stifles: even her affair with Bridget hardly represents an escape, given the way same-sex relationships were viewed at the time (if noticed at all). Axing her stepmother to death while naked is perhaps as close as she comes to really letting go.

But the final irony lies in the fact that, as revealed in the end credits, Lizzie was acquitted because it was considered inconceivable that a crime of such savagery could be committed by a woman of her social class.

Apparently good taste is not necessarily a strait jacket.