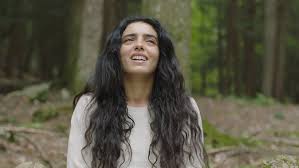 I took over a week’s holiday for the London Film Festival in 2018. This leaves me with no anecdotes about my experiences when I get back to work but it means that I can ‘visit’ many different countries without the hassle of actually having to go anywhere specific – and it’s in the nature of the films I watch that, having seen them, I wouldn’t want to go there anyway.

Isabella Esklöf’s Holiday is a case in point. Our heroine Sascha (Victoria Carmen Sonne) is on holiday in Turkey with her boyfriend, who is also her boss – a Danish gangster – when a stranger catches her eye. Generally a passive observer of her own fate (as long as she looks good, then everything must be OK) she dimly senses the possibility of escape with this guy, a laid-back Dutch traveller sailing around aimlessly in his yacht – and what she is trying to escape is graphically demonstrated when her boyfriend forces himself on her in a drawn-out sequence observed with bone-chilling fixity.

In spite of her hopes, after a tense evening at the gangster’s place during which both he and Sascha are humiliated, the Dutchman rejects her, and she lashes out, leaving him for dead on his yacht – and if he isn’t dead then, he certainly is by the time the gangster’s henchmen have discreetly disposed of his body in the morning.

This is a bit like Coralie Fargeat’s Revenge, only without the revenge – or with the revenge enacted upon the wrong man. It’s also an acerbic late-capitalist take on Pandora And The Flying Dutchman, the 1951 Albert Lewin film in which Ava Gardner’s Pandora falls for James Mason’s immortal yachtsman. He is condemned to live forever until he finds a woman who loves him enough to die for him; Pandora, previously always tormented by vague unrealisable desires, is that woman.

Both die, but there remains the possibility that they are enjoying each other in the afterlife. In Holiday there are none of the consolations of fantasy, just the fantasy: only the Dutchman dies, yet by remaining a gangster’s glamorous toy Sascha seems to have opted for a living death. But Eklöf, who observes all this in a coolly distant manner reminiscent of Michael Haneke, maintains in the Q&A that ‘freedom of choice’ is overrated – is often no more significant than the choice between one washing powder and another. We are all caught in our situations as inescapably as Sascha. Even looking away from the screen won’t help.

This Teacher also evokes the perils of going away: Parisian Muslim Hafsia (Hafsia Herzi) visits her rich friend in New York and immediately finds herself at odds with her surroundings and her friend, so much so that she soon relocates to a cabin in the woods, where she is terrified by noises in the night and then has some kind of mystical experience.

She tries in vain to explain her epiphany while drunk to an American couple in another cabin who, not being able to speak French any more than she can speak English, can’t understand a word of it, though they are amused in a condescending sort of way. Or at least they are until they find out that she’s a Muslim, it not having previously occurred to them that someone could be that and French. At this point the atmosphere becomes distinctly uncomfortable.

This whole long scene, which takes up maybe half of the film, is beautifully-played and thoroughly convincing but the film’s most interesting aspect is the way it keeps us at a distance from Hafsia. In a key scene at the beginning a strange man gives her a handbag on the subway platform, and it’s hard not to conjure up the possibility of a terrorist plot; although in fact, as is explained much later, he simply thought she’d dropped it and was handing it back to her.

So there is no plot – nor is there in Mark Jackson’s film, or not exactly. The moral might be that plots get in the way of understanding people; we are too eager to fit strangers into already-familiar stories. The title is a fragment of a slogan from a patriotic T-shirt Hafsia borrows from the couple expressing support for the police – the garbled message wrests the possibility of a more hopeful narrative from it, even as it suggests the kind of misinformation that routinely renders other people opaque.

I introduced this as an illustration of the horrors of ‘going away’, which it is to some degree. But that would be to sideline the importance of Hafsia’s mystical experience, wherein she appears to encounter some lost other half of herself. While this is as ambiguous as anything else in the film – we could see it as madness – from her point of view it is an overwhelming spiritual event, one which makes her whole, and she had to lose herself in a foreign wilderness in order to find it.

The point being that one can ‘belong’ anywhere: one only has to feel that one does. Perhaps escape, even from oneself, is a possibility after all.

Although increasingly there isn’t even a need to leave the house. You can work from home, you can order food in – least of all do you need to go outside in order to watch a film, thanks to Netflix et al.

So it was an act of almost heroic perversity for me to travel all the way to the Prince Charles Cinema off Leicester Square to see Cam, a Netflix production. But I consider it to have been worthwhile.

However, everything changes when Alice finds that a virtual version of herself has taken over her act and locked her out of her own account. This eventuality is never really explained, but that doesn’t matter: it is exactly the kind of thing that you can imagine happening on the internet, leaving the victim with no other recourse than to ring their service provider and get put on hold. Nobody really knows how any of that stuff works, do they?

Alice gets no support from her family, who weren’t aware of what she did for a living and aren’t best pleased to find out, or the police. Neither are fellow sex-workers or clients any help, and Alice has to find her own way of asserting her own reality again.

Brewer gives an excellent performance as the increasingly bewildered and desperate heroine and director Daniel Goldhaber keeps the tension high in what turns out to be a persuasive and gripping account of digital alienation, with some of Videodrome‘s queasy ambience about it.

Writer Isa Mazzei was on hand to talk about the ‘subversive’ goal of the film – to celebrate sex workers and what they do rather than present it as something shameful. Whether this works on that level I’m not sure. When Alice finally gets the upper hand over her virtual alter ego and then immediately heads straight back online with a new identity, I can’t see too many audiences unambiguously applauding her decision to get back on the horse (that’s a metaphor by the way: there’s no horse).

Nothing wrong with celebrating sex workers, but perhaps a horror film – or psychological thriller – is not the best place to attempt it, given that ambiguity is their stock in trade. But if the film fails on this level, that doesn’t mean that it lacks substance – rather, it is fueled by a terror of the lack of substance, the idea that a life lived inside, online might leave us bodiless, our experiences ghostly. Its true subversive quality might lie, then, in its willingness to (metaphorically) bite the (metaphorical) hand that feeds it.

At any rate, worth turning out for.