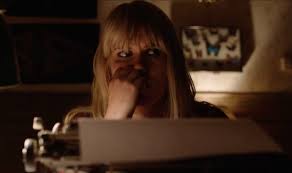 Yes I know, we are already well into 2019 but let me take you back, BACK to when the self-service checkouts in Poundland were still speaking in the voice of Bela Lugosi (‘Have a spooooky day!’)

In truth I wasn’t all that inspired by the films on offer at Frightfest Halloween and might not even have gone if Dave, who had failed to make Frightfest proper again (something to do with Mariah Carey, as per usual) hadn’t suggested it. Even then he slept through a lot of the action, but it’s the thought that counts.

On the basis that even ‘bad’ films can give you something substantial to chew over, I’m pleased that we went to the Empire Leicester Square, even if there wasn’t any of the usual Frightfest paraphernalia around – no DVD stalls, no nothing. We were very definitely being shoved into a corner, away from the tourists enjoying whatever the hell was on general release then. But serve us right for seeking out such shadowy fare.

With this one I would not even put the ‘bad’ in inverted commas (even though, yes, I just did) since it would be hard to deny that it is a bunch of old hokum. The blandly generic approach of Julian Richards’ Reborn made me think of films that you might catch on Channel 5 in the afternoon if you didn’t happen to be working – films dealing with such issues as vengeful exes, evil twins and – in this case – the trauma of discovering that your supposedly stillborn child is still alive and murdering people using electrokinesis (look it up – the characters do).

Frightfest veteran Barbara Crampton plays Lena, advised by her therapist that since she has been having nightmares ever since her daughter was stillborn sixteen years previously, maybe it’s now time for her to return to the hospital and get some closure on that. At around the same time her daughter Tess (Kayleigh Gilbert) has just managed to escape from the creepy morgue attendant who took her home all those years ago to go live with him and his mother (a decaying corpse).

Anxious to be reunited with her own mother she poses as a student in Lena’s acting class, giving rise to the film’s best scene, where their reading of some mother-daughter dialogue spills over into authenticity (the film’s only brush with that). Meanwhile various people who annoy her are obliterated by means of her manipulation of electric currents, an ability she gained when a lightning strike brought her back to life in the morgue.

That might evoke the plot of recent bestseller The Power by Naomi Alderton, in which women acquire the ability to deal out electric shocks, but this is not so likely to set the world on fire. Had it amped up the camp it might have succeeded – there is a knowing element, most conspicuous in the constant references to Lena’s upcoming audition with ‘Bogdanovich’. Finally a nightmare sequence ripped off from Carrie turns out to be a scene from the film Lena is acting in, directed by Peter Bogdanovich (it is indeed him).

Well that’s good for a cheap laugh but although Kayleigh Gilbert’s performance has a certain (ahem) spark, suffice it to say that if this were really the kind of film Bogdanovich were directing now, his reputation would be fried.

Paul Kaye plays Brian, one of a number of workmen seemingly doing nothing with a closed-off section of road but in fact presiding over some kind of interdimensional breach from which tentacled creatures with creepy doll faces (‘We call them fucktards’) occasionally emerge. The film has a nice line in dry working class wit, as resistant to sentimentality as it is to curiosity or awe – when our young hero Alex (Joshua Glenister) asks Brian what lies beyond the glowing portal he is met with the classic response: ‘Not our department.’

And although the possibility of expanding this into a feature was mentioned (there are no plans currently) and I’m not averse to the idea, there is something about that laconic admonition that demands respect – especially as, in terms of the film, the ‘department’ in question would be the special effects department, and while they acquit themselves very well here, one would not necessarily want them to take over.

In a longer film, of course, it is necessary to go through the portal, and, special effects or not, we may be disappointed by what we find. In Mexican director Isaac Ezben’s film we do so in the company of a group of young Canadians (early 20’s) who come across a mirror which, as long as it is kept at a certain slant, functions as a gateway into an infinity of parallel universes. Neglecting to alert the authorities, they quickly set about finding ways to exploit this for their own ends.

Thus artist Leena (Georgina King) copies (or allows herself to be ‘inspired by’) the work of an artist not known in this universe and the even more ambitious Noel (Martin Wollstrom) introduces technological advances from elsewhere into our world. It isn’t just about money though – Josh (Mark O’Brien) merely wants to get off with as many women as possible without having to face the consequences, and Devin (Aml Ameen) is trying to find his dad, who killed himself in this world and, it turns out, most of the others – but maybe, just maybe, not all of them.

In the main this plays out quite effectively as a thriller, with Noel growing increasingly psychopathic, as begins to become apparent when Josh gets shot by a jealous husband and dies, necessitating (as Noel sees it) the kidnap of another version of Josh to replace him in this world. Devin finds his dad (we knew he would because he’s played by David Harewood, who presumably wouldn’t have turned up just to appear in photographs) and this allows for a moving scene; however this thread meanders unsatisfactorily away from the main thrust, a clear danger when your plot deals with multiple parallel universes.

Still Ebsen and writer Scott Blaszak keep it mostly on track, and this was certainly the most satisfying full length feature of the day. Although maybe that’s not saying too much when we skipped the last two films and during:

…we were in Pizza Express. Dave had vouchers.

If online reviews online of Mara had suggested that it was generic enough that actually watching the thing might be beside the point, Peripheral promised something more ambitious. As it turns out its ambition is hard to fault.

Bobbi (Hannah Arterton) is a writer who has had a massive hit with her debut, an anti-establishment work called Bite the Hand so inflammatory that it has caused riots. Despite which she has been left – somewhat improbably – in a position where she is unable to pay the electricity bill for her small flat. Her snarky agent (Belinda Stewart-Wilson) agrees to pay it on the condition that for her next book she abandons her manual typewriter in favour of an enormous state-of-the-art computer which, as far as we can tell, will practically write the thing itself.

She agrees, but finds that having your agent’s face keep popping up on your computer screen beneath a countdown to your deadline is a bit distracting. In fact it is very hard to believe that any writer, much less one as radical as Bobbi is supposed to be, would submit to such treatment, but as a metaphor for the relationship between writer and society – and for the anguish and uncertainty attending the creative process around that difficult second book – this makes a kind of sense.

Unfortunately the metaphor jumps the shark when the computer – having got over-excited watching Bobbi have sex with her dodgy ex (and having quickly researched ‘sex’ on Wikipedia) – manages with the help of a hardware upgrade to impregnate her, so that she finds herself simultaneously struggling to finish the book and give birth. I think that’s what critics call a bit too ‘on the nose’.

Had director Paul Hyett and writer Dan Schaffer discovered a unifying tone (satirical? dream-like?) it’s possible to imagine this working. But although there are some interesting ideas and effective moments the film is rather incoherent and bizarrely old-fashioned, in thrall to the notion of the tormented genius in her garret and also to the book as physical object.

This last looms particularly large at the end. Bobbi ultimately decides to throw away her first drafts and allow the computer to dictate an ‘acceptable’ offering, but a deranged fan (Rosie Day – very good) reconstructs the shredded originals and presents them to the moved author. Presumably this represents the ‘authentic’ spontaneous work of genius, but from the audience’s point of view it might as well be identical to the published version – we don’t know what the publishing company (incarnated with chilly poise at the end by Jenny Seagrove) really wants from Bobbi – something outrageous to make more money, or something tame to discourage further rioting?

Finally the film, with its echoes of Demon Seed, Videodrome, and even Mother! seems as confused as its heroine. And me. And Dave?

He had been sleeping, but had seen enough to wonder where the baby went. I don’t think we saw it again after Bobbi was distracted by Jenny Seagrove (‘I am the Fourth Estate) ringing the doorbell but I for one will not be calling the social services. They’d never believe me.