Gentrified Horror: The Nightcomers (1971) and Us 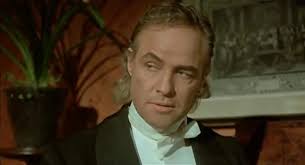 In Nick Pinkerton’s positive Sight and Sound review of Puppet Master: The Littlest Reich (which I thought was shit by the way) I first encountered the phrase ‘gentrified horror’, a pejorative term for the kind of upmarket horror that plays to cinephiles at festivals or (say) the Barbican – horror for ‘people who don’t really like horror’. It seems to have been coined in reaction to another term doing the rounds – the more complimentary (in theory) ‘elevated horror’.

Speaking as someone who does ‘really like’ – I’d even go so far as to say ‘love’ – horror, I must say that neither of these terms does much for me. ‘Elevated horror’ suggests a snobbish attitude to the genre, but ‘gentrified horror’ is worse – in trying to combat the notion of ‘elevated horror’ it sets ‘real horror’ up as a squalid hole-in-the-corner kind of thing that exists in opposition to the respectable, and while it is fun to think of it in that way, it seems to me that horror, if it means anything at all, penetrates respectability through and through – you can’t get away from it. It’s Varney The Vampire but it’s also The Turn Of The Screw.

Those who sneer at ‘gentrified horror’ might aim to champion authentic grue but aren’t they just tidying horror away so that it doesn’t contaminate Proper Art? Does Henry James’ above-mentioned novella (and Jack Clayton’s 1961 film version The Innocents) qualify as an example of ‘gentrified horror’? It is, after all, an elegantly constructed (and thoroughly respectable) edifice, whatever lives inside it.

If so, proponents/opponents of ‘gentrified horror’ will be heartened to know that the process is reversible, at least in theory. Michael Winner’s 1971 film The Nightcomers revisits Turn of The Screw as it seeks to dramatise how ambiguously ‘possessed’ children Miles and Flora were traumatised after becoming privy to the sadomasochistic sex games of manservant Peter Quint and governess Miss Jessell. We may imagine devotees of Henry James (or Jack Clayton) being similarly traumatised by Winner’s film.

The entire concept, after all, is a full-on assault against James’ aesthetic, wherein what is implied is as important as what is stated. The last thing James’ masterpiece of ambiguity requires is an ‘explanation’. The Nightcomers is in its vulgarity so far removed from James that we might well suspect a piss-take. And on that level it’s rather entertaining.

Marlon Brando’s Quint (boasting an Irish accent that might have inspired Brad Pitt’s in Snatch) dominates the film in a way that seems as unhealthy as his character’s influence over the children. It may be a sign of the extent to which James’ property has been devalued that the presence of a Big Star on the grounds comes to seem monstrous in itself, quite apart from what his character gets up to. ‘What do you want of us? Do you want money?’, housekeeper Thora Hird asks Quint at one point, and something in her bemusement transfers itself to the looming actor. What is he doing here?

Not that his character is a monster – neither Quint nor Stephanie Beacham’s Miss Jessell are really wicked here in fact. They don’t prey on the kids, only on each other, and then it’s made clear that class differences ‘explain’ their inability to connect except through violence. In fact there is at times a sense that the original text’s assumptions around class are being questioned, but it doesn’t really go anywhere.

The kids themselves are rather insipid, and even the scene where Hird catches them recreating Quint and Jessell’s bondage sessions comes across like something out of a Disney comedy. Winner’s direction is awkward in the more formal sequences, like he can’t wait to get to the fun stuff. Of course no film that begins with a scene in which a toad is forced to smoke a cigar, and explodes, is likely to go on to chart the depths of human depravity in any profound way.

Certainly the conversion of little Flora and Miles into cold-eyed psychopaths (they finally kill Quint and Jessell) is wholly unconvincing. We are asked to believe that the murders are the outcome of the kids’ romantic confusion between love and death, their idea that only death can release the lovers (who they worship) into some kind of eternal bliss.

But while this might work on a theoretical level, it lacks any real emotional charge. Such an extreme reaction needs a more visceral motivation – something of the order of sexual abuse by Quint and/or Jessell I would have thought.

But Winner shies away from anything that disturbing, so the reverse-gentrification ultimately fails: James’ elegant reticence allows for far more horrible possibilities than Winner (or screenwriter Michael Hastings) can envisage and so his take on the material proves to be more cheeky than subversive. Which doesn’t mean it isn’t fun to watch.

And so to a film which has been cited as an example of ‘elevated horror’, though ‘elevated’ is quite the wrong word – this goes deep. When I reviewed Jordan Peele’s Get Out back in 2017 I commented that one of its (few) disappointments was that it still had faith in the idea of a black identity the hero could fall back on. That certainly isn’t an issue with his second film, which begins with a memorably tense scene in which the heroine-as-a-child visits (in 1986) a spooky hall-of-mirrors, only to find herself looking into a mirror at what appears to be the back of her own head.

On returning to the same beach resort with her own family as an adult, our heroine Adelaide (Lupita Nyong’o) is prey to a growing feeling of unease which proves to be wholly justified, as the family is terrorised by bestial scissor-wielding shadow-selves complaining (or their spokeswoman, Adelaide’s double ‘Red’ does) that their real lives have been stolen from them.

It’s a woollier concept than Peele used in Get Out, but one with far more resonance – the doubles might represent a demonised underclass, or perhaps they suggest an idea of authentic selfhood abandoned in favour of the ability to move at ease in privileged (white) society: not ‘gentrified horror’ but gentrification itself as a source of unease.

But the white characters have their doubles too, as the family discover when, escaping their own home-invasion scenario, they find their white friends have also fallen victim to their own doppelgangers – indeed, succumbing to them in a matter of minutes in a gleeful example of payback for years of early exits by black horror film characters.

The black family then get to stage their own home invasion, killing off the doubles and taking over the (luxurious) property. It isn’t often that we are called upon to cheer on the killers in such a scenario, and although this film is less overtly comedic than Get Out, it’s clear that Peele’s sense of mischief is alive and well. (Perhaps the film’s best joke comes when Elizabeth Moss asks her voice-activated device to call the police and it plays NWA’s Fuck Tha Police instead.)

But anxieties over race and the portrayal of race are not the film’s only focus. The Tethered, as they are known, resemble inmates in a lunatic asylum, living underground and spending their time imitating their ‘real selves’ up above. They are only monstrous because suppressed and disavowed, an embodiment of the idea that there is always a part of the self that can never be fully integrated into society. At the same time they are certainly dangerous: we are often reassured that the menacing Other is in reality ‘just like us’ – this film suggests that that does not necessarily make it any the less terrifying.

The final (SPOILER ALERT) twist reveals that the (ultimately victorious) Adelaide was the double all along, having switched places with the ‘real’ Adelaide as a child in that early funhouse sequence – thus explaining why she alone, out of all the Tethered, could talk (and instigate a revolution). We have been rooting for the wrong woman all along – or have we? Is this a devastating twist or no different in essence from the ‘happy ending’ we thought we had originally?

Our inability to tell brings us to the slippery essence of horror, a genre whose devotees are called upon precisely to like what they do not like. ‘Elevated’ and ‘gentrified’ horror are non-starters really, because horror is always built on unstable ground which simply won’t support such structures.

You can try to elevate horror but if it isn’t still in close contact with the pit it won’t work; and as for gentrification, horror tends to deal with the vexed question of what is perceived as safely inside – and unnervingly outside – society anyway and so has already come to terms with the concept of gentrification in its own way. If these terms have any use at all, it will be for people who like to keep horror at arm’s length – people, in other words, who don’t really like horror.

Then again I suppose it all depends on how you define horror. But isn’t that just the problem? You can’t.