Our Time / Once Upon A Time In Hollywood 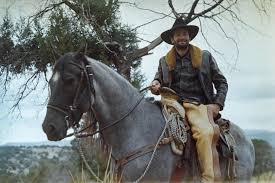 There was quite a high turnout for this three-hour epic of directorial self-laceration from Mexican director Carlos Reygadas, although admittedly this was at the Minema screen at the Curzon Bloomsbury, which seats about 20 people. I had a guy ahead of me whose hair just obscured the subtitles unless I sat bolt upright in my chair; in the end it was hard to distinguish my irritation with this from my reaction to the film, although perhaps Reygadas himself, playing the main character alongside his own wife and son, and on his own ranch for the most part, had similar problems separating the final product from his immediate situation.

Reygadas is Juan, a poet living on a ranch in Mexico and trying to cope with an open relationship which goes wrong when his wife Esther (Natalia López) falls for someone else. Although Reygadas claims that this isn’t about him – he and his family are ‘just actors’ – he does seem to be recycling his earlier material here, right from the opening sequence of children playing, which suggests a less ominous take on the beginning of Reygadas’ last film, 2012’s Post Tenebras Lux.

It is rather as if the ‘visionary director’ has tried to turn his vision upon himself, and if this is the case at least the film is honest enough to acknowledge that this is not possible. You can’t step outside yourself and you can’t live at one with nature either. Watching Juan struggling to accept that the situation is out of his control while simultaneously trying to control it is thoroughly exhausting, but authentically so perhaps. It all gets so tangled that he ends up accusing the interloper, Phil (Phil Burgers), of cowardice for not pursuing a relationship with his wife. It may well be, as Esther finally suggests, that the real, never properly acknowledged, relationship here is between Juan and Phil.

‘Got to get in to get out’, sings Peter Gabriel on Genesis’ Carpet Crawlers, which plays over one of the film’s more wayward moments, as the camera explores the undercarriage of Esther’s SUV. This states the film’s problem perfectly, or at least my problem with it: I couldn’t get into it and so I couldn’t achieve any kind of emotional identification, let alone catharsis. Juan seems to achieve the latter at one stage, bursting into tears at the bedside of a dying friend (‘It’s not about you’, he assures him) but it’s just another passing mood, not a resolution.

But if we are effectively banging our heads against a glass wall here (reflections of light on the camera lens are a recurrent visual motif) then so is Juan I suppose; and so is Reygadas. At the end a bull pushes another bull off a cliff, which perhaps is how the situation between Phil and Juan would have played out in nature. It looks like desperate symbolism, but maybe it’s the desperation that matters. I’ve always enjoyed Reygadas’ work before – I can’t say that I enjoyed this but perhaps, in order to be true to itself, Our Time really needs to fail.

ONCE UPON A TIME IN HOLLYWOOD

Quentin Tarantino’s latest film presents us with more directorial navel-gazing, though this is the kind where the gaze is endlessly refracted and at the end of it we find out that there is no navel after all, and probably never was one.

‘Quentin Tarantino has made his masterpiece’, says a prominently-placed quote on the poster – yes, wasn’t it called Pulp Fiction? It has always seemed to me that in that film he got the balance between dumb and knowing exactly right. By now it is starting to look like he’ll never have that recipe again – whenever he tries it it curdles. That doesn’t mean that it doesn’t curdle in interesting ways, but in spite of the critical plaudits OUATIH is really just more of the same.

Much more. I like a metatextual wallow as much as the next guy (and it normally is a guy) and the Hollywood setting allows for an even greater wealth of cinematic and televisual references than usual. Just the sight of a drive-in billboard advertising a double bill of Lady In Cement and Pretty Poison is enough to generate hours of speculation on what these titles say about Tarantino’s attitude to women. But I can’t help pitying the not-so-obsessive multiplex audience – I saw this in Bas Vegas – who have to sit through so much of this film’s self-referential aimlessness only to be rewarded with a few scenes of crowd-pleasing carnage (the crowd in question being a redneck drive-in audience circa 1971).

One problem is that, despite the setting, there is a dearth of colourful characters here – I enjoyed Nicholas Hammond’s barmy version of Sam Wanamaker (though for all I know he really was like that), but Leonardo Di Caprio’s Rick Dalton, a cowboy star in the midst of a serio-comic existential crisis, and his driver and companion, Cliff Booth (Brad Pitt) are not enough to sustain this.

Dalton finds himself, in 1969, living next door to Roman Polanski and Sharon Tate, which allows for the Manson murders to become part of the action – or rather it doesn’t. At a certain point it becomes apparent that Tarantino is either going to have to restage these killings or, in an historical intervention of the kind he has already practised in Inglourius Basterds, prevent them. Neither option seems quite to cut the mustard, but it is this last that Tarantino opts for, having the rather feeble Mansonites turn up at the wrong address to get brutally dealt with by Cliff (and his dog).

Thus old-school (or, as it is now known, ‘toxic’) masculinity gets to save the day – although Cliff’s violent outbursts (he also gets to beat up Bruce Lee, here presented – in the film’s most audacious scene – as an obnoxious twerp) can be read as the over-compensatory fantasies of an ageing kept boy and (probably) repressed homosexual, writ large. (Cliff has killed his wife, we are told, which only seems to add to his macho mystique.)

These complexities seem stifled, however, by Tarantino’s obsessive gaze. When at the end, Dalton is finally admitted into the Polanki/Tate household – or Heaven, depending on your interpretation – it only left me thinking that the whole film has really been about Tarantino puzzling out his own status as grindhouse fanboy turned major Hollywood player.

Which wouldn’t be a problem if it weren’t for the unforgivable fact that Tarantino has rescued Sharon Tate (Margot Robbie) from her terrible fate only that she might serve as a focal point for his fetishes – cinema, the past, feet. Outside of that she comes across as an empty vessel, intoxicated by her own celebrity.

The one modern influence I thought I detected here – in the climactic violence at least – was S. Craig Zahler, but Zahler writes better dialogue than Tarantino does nowadays. Here Tarantino involves Lena Dunham in a pussy joke (making me wonder if Mrs. Slocombe from 70’s UK sitcom Are You Being Served? is one of his less publicized fetishistic interests). Not sure why Dunham (playing one of the more seemingly benign Mansonites) is in this, but perhaps her presence is meant to vouch for Tarantino’s feminist credentials. She does look a bit uncomfortable; maybe Tarantino kidnapped her.

David Gregory’s amusing new documentary Blood And Flesh, about the 60’s/70’s exploitation director Al Adamson, covers much of the same territory as this film (Charles Manson turns up in it too). Interviewed in it, Russ Tamblyn shares his amazement that Tarantino could recite, word-for-word, a speech he improvised for Adamson’s biker film Satan’s Sadists. Impressive as this is, in its way, perhaps Tarantino would do better by memorising Adamson’s own ‘secret’, as revealed by him in the documentary – that he made his films for audiences, not critics.

If you put Our Time in front of a multiplex audience the screen would have emptied out in the first half hour and it is probably fair to say that I enjoyed OUATIH more. At the same time I have to respect Reygadas for at least making an effort – even if a lot of the effort he made was also mine. There is too much Tarantino in OUATIH – as if, like Reygadas, he needn’t have bothered to leave the house in order to make it.

Our Time demonstrates that it is impossible to stand outside oneself, but Tarantino should give it a try sometime.