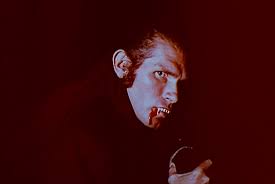 BLOOD AND FLESH: THE REEL LIFE AND GHASTLY DEATH OF AL ADAMSON

The Cineworld discovery screen offered up David Gregory’s documentary about Al Adamson, the 60’s /70’s exploitation director responsible for such films as 1965’s Psycho-A-Go-Go and 1971’s Blood of Ghastly Horror – in fact, the same film with added zombie footage. Ahead of his time, Adamson was keen on recycling, though it wasn’t about saving resources so much as money.

Economy was his watchword, and although he was able to get down-at-heel stars like J. Carroll Naish and Lon Chaney Jr. to appear in 1971’s Dracula Vs. Frankenstein, Dracula was played, not well, by Adamson’s stockbroker Roger Engel, renamed ‘Zandor Vorkov’. It’s fair to say that the director had a sense of humour, and so does this film: the coverage of Adamson’s work is witty, and adorned with well-chosen clips, but the film necessarily takes a swerve towards the end when it has to deal with Adamson’s death at the hands of his odd job man and ‘only friend’, Fred Fulford.

There is an obvious irony in the director of films such as Satan’s Sadists ending up under a ton of cement in the space formerly occupied by his jacuzzi, but it’s a shallow one, and when the film delves into these events the fun, naturally enough, drains away.

At this point in his life Adamson had removed himself from the film industry, and the main link between his earlier career and his demise is his legendary meanness – just as he never paid many of his filmic collaborators, so (it is suggested here) he may have been equally stingy with Fulford, which may have been a factor in his murder (always assuming that the convicted killer did actually do it – he claims otherwise, and we hear him doing so from prison).

Indeed the second half of the film arguably resonates more with previous Frightfest showing Girl On The Third Floor than with its own first half, as if Adamson’s tendency to add footage from other sources had even crept into the story of his life. Imagine, then, a house, bought with the money made from Adamson’s lurid back catalogue, infested with a ‘ghastly horror’ released by the odd job man’s drill…

Which is in bad taste but no more than anything else in this director’s oeuvre. Still, we can understand the necessity of a change in tone in the second half, as the film turns into an investigation rather than a romp, well-enough handled if a bit of a buzz-kill. It’s still a smoother journey than most of Adamson’s films manage, God rest his soul.

This domestic thriller is surprisingly unadventurous fare from director Lucky McKee and writer Chris Siverton (All Cheerleaders Die) – it’s the kind of story you could imagine being dramatised for ITV and shown in two parts on consecutive nights: Sunday and Monday, probably.

That isn’t to say that it’s badly done. Chloe (Thora Birch) and daughter Nicole (Sasha Frovola) are rejoined by Birch’s charmingly irresponsible younger sister, who went off the radar for a few years but has come home to ‘regroup’ after an unspecified situation failed to work out. Bonding with her niece, whose life she apparently saved many years previously by dragging her out of the path of a car, Sadie (Caitlin Stasey) initially appears to be a breath of fresh air.

When, joining Nicole at a party, she is picked up by a boy who mistakes her for a fellow high school student, and fails to correct his impression, it initially seems like she is just having a bit of fun. Gradually however, it becomes clear that Sadie’s idea of ‘starting over’ means actively reliving her youth, and even taking her niece’s place in the household.

To this end she seduces Nicole’s alarmed-yet-compliant boyfriend Kenny (Liam Booth), before cutting his throat, and murders Nicole’s best friend’s father Alex (Macon Blair) – who was seeing Chloe in secret – all the while hoping to blame the killings on her niece, who has ‘anger issues’. It’s all about family, and its insidious pull on our affections – the incident wherein Sadie saved Nicole’s life proves to be entirely false (Sadie was trying to kill her), and so it seems that a whole edifice has been founded upon a myth.

The myth is a plausible one though, especially as incarnated in Stasey’s performance, a compelling evocation of a personality both likeable and believably pathological. It’s just a shame that the film never delves very deeply into her psychopathology and that the ending, wherein Sadie’s evil plan comes a cropper, is so perfunctory.

More craziness here, but of the willed variety. Channeling early Abel Ferrara (Driller Killer) as well as later Abel Ferrara (The Addiction) Joe Begos’ energetically scuzzy offering explores the various travails of Desirée (Dora Madison), a struggling LA artist on the verge of creating her masterpiece – all she lacks are the right drugs.

Then she discovers a drug which seems to do the job, apart from causing her to experience lost time and develop a taste for human blood. While the film does a great job visually and aurally of putting us into Desirée’s frenzied headspace, the introduction of vampirism into her story was something I found hard to swallow. It may be intended as symbolic of the way artists and addicts drain their loved ones dry (it is presumably noteworthy that the only people Desirée doesn’t attack are her agent and her patron, much as they seem to deserve it) but it clutters a scenario which felt fresh with over-familiar Gothic trappings.

There is no doubt, however, that the theme is pursued with ferociously gory relish as Desirée chews at people’s body parts (George Wendt’s included) and also puts paid to other vampires, causing them to dissolve into multicoloured goo, like spattered paint. Dora Madison is great, and almost enough to carry the film through to its fluffed conclusion, wherein she pops like a bubble in the morning sunlight as she puts the finishing touches to her painting.

This painting, which began impressively as a steadily-growing tower of upward-reaching human figures, emerging from a background of hellish red, has finally resolved itself into one central figure – a demonic self-portrait. In other words, Desirée has put herself into her painting, and so can cease to exist in the real world. It’s all very neat – too neat.

The painting looked more like a possible masterpiece in its formative stages, and although the finished work isn’t bad it brings with it a dispiriting feeling that the Gothic trappings have set in once and for all. Abel Ferrara managed to navigate art and trash without falling into kitsch – it’s a feat that Begos, for all his dynamism, fails to duplicate.