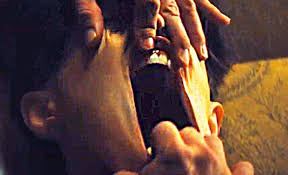 In 1991’s No Telling, Larry Fessenden’s first take on the Frankenstein story – and first film, in fact – the mad scientist has, by the end of it, managed to weld a Border collie and a calf together, which would only have made the third act in a standard horror film. It is, however, immensely to the film’s credit that the carnage it wreaks on animals, even white mice, seems no less consequential or disturbing than the normal horror movie outrages perpetrated upon humankind – all the more so because stuff very similar to this is actually happening in laboratories everywhere. Or so I imagine.

Like an ambitious scientist himself, however, Fessenden has been unable to resist the temptation to move on to the higher species – hence Depraved. This begins with what we might call the hero leaving his apartment after arguing with his girlfriend about the prospect of having kids, something he isn’t yet ready for.

He needn’t have worried since, having been attacked in the street, he soon finds himself heading up the latest experiment of this film’s Frankenstein, Henry (David Call), an assemblage of stitched-together corpses (Alex Breaux). His memories of being human – let alone a specific human – are hazy to say the least, so he needs to be re-educated, but whereas Mary Shelley’s monster got to read Goethe this one gets a cynical potted history of humanity from Henry’s business partner Polidori (Joshua Leonard) during a whirlwind tour of the New York Metropolitan Museum. This is followed up by a visit to that cornerstone of human civilization, a strip club.

Polidori regards the monster as little more than a product, or even less than that – the vehicle for the product, a new miracle pill he hopes will revolutionize medicine and make him very rich. Henry, on the other hand, driven by the trauma of seeing fellow soldiers blown to pieces in the Middle East, is more sympathetic – or guilt-ridden at least. His girlfriend Liz (Ana Kayne), once she finds out what he has been up to, is able to get him to resist Polidori’s blandishments, but the monster proves too unstable to keep around, and is eventually put down and buried.

Aside from his violent rages the monster is mostly a poignant, childlike figure, recalling Freddie Jones in Hammer’s Frankenstein Must Be Destroyed. However, he gets to enjoy a slice of old-school Universal Gothic action when, after his burial (which has proved to be premature) the film turns to black-and-white as he lurches free of the grave to enact his revenge upon Polidori during a thunderstorm. It’s an abrupt change in tone for a relatively low-key, character-driven film, but Fessenden gets away with it.

It may be that he gets away with it because, in spite of all the stuff about fatherhood and war and the pharmaceutical industry, there is nothing really new in Depraved – No Telling was much less polished, yet gave the classic myth a genuinely original spin. But Depraved is still smart, and its heart is in the right place. In the end we have to conclude that the modern world is so broken that there’s no hope of putting it back together again, but at least we feel that Mary Shelley’s creation is in safe hands here.

After visiting a free talk on writing – they asked for a show of hands as to who in the room was a writer, and I put my hand up purely on the basis that this, what I’m doing now, is writing – I attended my last Frightfest screening of the weekend, the second film directed by Adam Egypt Mortimer.

For a start, it’s a good name – more people should adopt a country as their middle name – and the film isn’t bad either. Like Depraved, it’s a take on a familiar horror scenario – in fact a familiar Frightfest scenario, since I seem to have seen more than my fair share of Frightfest films in which an imaginary friend turns out to be real. You could say that Frankenstein is a take on this itself.

Here our young hero Luke (later to become Miles Robbins) is approached by his imaginary friend, Daniel, after witnessing the aftermath of a massacre. Daniel proves to be good company for solitary Luke but not wholly reliable. After he encourages Luke to give his mother (Mary Stuart Masterson) an overdose Daniel is locked in the doll’s house, a punishment which, whatever Daniel’s nature – imaginary or demonic – seems to do the trick, since there he stays until Robbins is grown.

At which point, now a student struggling to deal with his mother’s schizophrenia and his own fear of madness, he is advised by his therapist, who naturally takes the view that Daniel is a symptom, to let him out. Needless to say, this is bad advice.

Handsome and dandyish (and now played by Patrick Schwarzenegger), Daniel is initially supportive, helping Robbins to acquire a girlfriend, volatile artist Cassie (Sasha Lane). But one woman is not enough for Daniel, who has after all spent his teenage years confined to a doll’s house, and when Luke turns out to be more of a quiet-night-in guy, he contrives to take over his host’s body, to which end his face erupts into a mass of invading tentacles. It’s Luke who ends up in the doll’s house, though he doesn’t intend to stay there.

Mortimer directs with great visual flair and exuberance, and the ambiguity over whether Daniel is symptom or spirit is well-handled – for a horror film this is unusually clued-up about mental health issues, even if Daniel turns out, after all, to be a supernatural entity. Schwarzenegger is a little stolid for the Daniel role I thought but not without charisma; Robbins is better at playing his own bad self, though he doesn’t get to do it for long.

I haven’t seen Mortimer’s first film, Some Kind Of Hate, and his slightly dismissive attitude to it doesn’t necessarily make me want to, but this is the film he really wanted to make (from co-screenwriter Brian DeLeeuw’s novel) and it shows in a boyish enthusiasm that mostly carries you along with it, though at times he gets a bit over-confident, even throwing in a swordfight at the end. As with Depraved, there is nothing new here, but Daniel Isn’t Real feels fresh enough.

And that was 2019’s Frightfest, from which I struggle to pick out a highlight – everything had its good points, nothing transported me wholly. Then again I didn’t see The Banana Splits Movie. I have memories of these furry creatures from kid’s TV in the 70’s but almost distressingly vague ones, as though some kind of trauma were involved. I can’t remember what they said – if they even had voices – or what they did: all I remember is the camera zooming in and out on them, as if something shocking were happening – but what? What?

It seems entirely appropriate that they should recur now in a horror scenario and yet even though the DVD is now available for a mere five pounds in Sainsbury’s I still can’t bring myself to buy it, perhaps because I don’t want to wake that buried trauma. Or because I know it’s going to be shit.