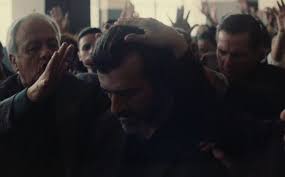 According to writer-director Jayro Bustamente only about four films are made in Guatemala per year. I have now seen two, which pretty much makes me an expert in Guatemalan cinema. I could probably write a book on it.

Not to be confused with a Kevin Bacon film about giant sandworms (although it might usefully be confused with it I suppose, I can pursue that in the book) Tremors is a familiar enough story of a married (to a woman) gay man, Pablo (Juan Pablo Olyslager) caught between the oppressive demands of his wealthy family and his male lover in a society that is a far cry from ‘woke’.

In order to keep seeing his kids Pablo has to undergo conversion therapy (including wrestling half-naked with other men – not sure how effective this is) and eventually abandons his lover and ends up back within the stifling bosoms of church and family.

This is not, then, a heartwarming story of self-actualization – indeed it could almost be viewed as an endorsement of the church’s position. There’s a particularly chilling scene where Pablo, whose therapy has meant having to stay away from his lover Francisco (though there has been at least one lapse) contacts him, leading Francisco to think that Pablo is returning to him.

Instead, he finds Pablo surrounded by his family and bidding him a final ‘official’ farewell – this is no lovers’ reunion, just the end stage of the therapy. Yet the scene is so coolly observed (in keeping with the coldness it depicts) that you could imagine an audience who bought into the ‘official line’ being relieved at this ‘happy ending’.

Not that it is the end, but the final scene, where Pablo is sympathetically observed by his daughter as he conspicuously struggles with his choice, is equally ambiguous. It can be read as a sign of hope for a more understanding future, but it can also be seen as a justification for his actions – he has abandoned his ‘selfish’ pursuit of a forbidden lifestyle for her.

This approach makes the film more slyly effective a critique than if it had taken a more obviously positive stance. The ‘argument’ for freedom is conducted to a great extent through the claustrophobic visuals – take the opening scene, where Pablo returns to the gloomy family mansion to find his family lying in wait for him to stage an ‘intervention’: it’s like the start of an Old Dark House mystery where a lurking killer bumps off the beneficiaries of a will.

Earthquakes provide actual tremors, which you might assume are intended as a metaphor for social upheaval. Perhaps they are, but they also add another Gothic touch, evoking the anxiety attendant upon Pablo’s uncertain position and suggesting the ominous power of, well, God I suppose.

Yet there’s a sense that Bustamente sees clearly through the murk even if he doesn’t – quite rightly – want to dispel it. He understands, for example, that this endemic homophobia is a refinement of misogyny: even the most coldly unsympathetic face of the regime here – the pastor’s wife who presides over the conversion therapy (Sabrina De La Hoz) – is having to endorse a system which encourages men to thank God they weren’t born female.

Bustamente’s other film in the festival also shows his willingness to pitch his tent among the forces of oppression, in another gloomy mansion, this one belonging to a general, Enrique (Julio Diaz) being tried for genocide. More oppressively still, at least for Enrique and family, the house is being besieged by protestors.

As well as being a ‘monster’, the general is also a frail old man, making the viewer’s response more complicated than that of the protestors outside – we understand the lies these people need to tell themselves in order to carry on living. Juan Pablo Olyslager and Sabrina De La Hoz from Tremors reappear, she as the general’s daughter, whose husband has (probably) been made to disappear by her father. She is more sympathetic here, unconvinced but (like Pablo in the previous film) too firmly enmeshed in the family to step away.

It is left to a supernatural phenomenon – the ‘crying woman’ of Latin American folklore – to bring things to a head when she turns up in the guise of a maid, Alma (María Mercedes Coroy) after the servants (either because of mysterious sobbing in the night or for political reasons – or both) depart en masse.

Alma slips into the household with the same effortless ease with which the supernatural enters the film, the ghost story’s ‘return of the repressed’ and the political drama’s revenge of the oppressed bleeding into each other very nicely. Bustamente handles the ghostly aspect rather well, even managing to make girls with long straight black hair scary again; at the same time Alma is substantial enough to get the housework done.

As well as straddling two worlds she also has (at least) two ghostly identities – she is La Llorona (also the subject of another, more traditional, horror film in 2019) and also, so it is suggested, one of the general’s victims, returned from the grave to seek revenge. But she is no standard vengeful spook (any more than Enrique is a textbook monster) and it is down to the general’s wife, Carmen (Margerita Kenéfic) – formerly his staunchest supporter – to deliver the coup de grace to her husband.

This is the outcome of a ritual conceived by the one remaining loyal servant (also – probably – the general’s illegitimate daughter) Valeriana (María Telón), but Carmen has already been primed for the act by nightmares in which she lived through Alma’s experiences as her husband’s victim.

We can’t know the extent to which these dreams are ‘real’, but we know that Enrique is not innocent, and it makes perfect sense that he is killed by the person who is closest to him. This, you feel, is the only way true justice, if there is such a thing, can be done – intimately – and it perfectly justifies Bustamente’s intimate and never obviously judgmental approach.