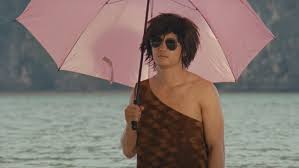 Showing in the ‘Treasures From The Archive’ section at the LFF, Nina Menkes’ Queen of Diamonds features her sister Tinka playing a character who, in the director’s words, ‘hasn’t learned to say hello’.

In keeping with her air of diffidence, she seems both to invite our gaze and refuse it at the same time. We see her caring for an elderly man (who dies), working in a casino, making a half-hearted attempt to search for her missing husband, and attending a neighbour’s wedding and while she is nearly always the focus she also contrives to elude us – it’s Las Vegas, all around her, that makes the bigger impression: bleak, flashy, hollow as hell.

I wasn’t sold on this until we got to the centrepiece, where we observe her dealing blackjack in the casino for an insanely long amount of time. Three separate scenes have been spliced together, switching back and forth between different timelines so that shots are dealt out in the same (apparently) random way in which she (or chance) deals out the cards. It’s strangely overwhelming.

After this it could do no wrong, and the proceedings are in any case enlivened by car wreck with dancing elephants and at least one decent joke – when she accuses her neighbour of beating up his girlfriend he marches furiously into her apartment to point out that she is his fiancée, not his girlfriend.

At the end she climbs into a sports car and is driven away – is she being rescued? Killed? At any rate, she has eluded us again: even, this last time, our gaze.

Ben Rivers and Anocha Suwichakornpong, together at last! The teaming up of these experimental film directors – one British, one Thai – may not have the pulling power of, I dunno, King Kong vs. Godzilla, but it is enough to sell out this Sunday showing at the ICA. And quite right too.

A female visitor claiming to be scouting locations for a film provides an initial ‘way in’ for us but then vanishes halfway through. Locals are interviewed about ghosts they have seen; a pop singer who has come to film an advert in a goofy caveman costume sings a karaoke number about how he has to pretend to like the things his crush likes (including – it seems – the very song he is singing); and there are a couple of ‘real’ Neanderthals living in the woods.

Are they working for the tourist board in deep cover or are they survivals from prehistory? (Krabi is famous for discoveries of early human remains). I saw them as a representation of the absurdity of the tourist’s search for the ‘authentic’ experience but Rivers (present) didn’t confirm this in the Q&A.

But one of the pleasing things about experimental cinema is that, although it might seem esoteric and forbidding at first glance, in reality it’s quite the opposite – it’s ‘open’, and you are invited to participate in the act of interpretation. In keeping with this, Rivers in person – like Nina Menkes – is relaxed and engaging.

I was particularly happy about the cavemen, since when I reviewed Rivers’ last film, The Sky Trembles And The Earth Is Afraid… I did so in tandem with Andy Milligan’s Horror Of The Blood Monsters (because they both have good titles) and HOTBM does feature cavemen – albeit vampire cavemen from another planet.

Coincidence? Well yes. Although I like to think that on some deep level way beyond rational comprehension I have somehow imported those cavemen (cavepeople I should say) into Krabi 2562. Given the essentially mysterious nature of the creative process, and of this slyly amusing and eerie film, who can say otherwise? Not even Ben Rivers – being ‘open’ means you have to suck it up. Although I didn’t raise the issue.*

* I am not, by the way, suggesting that Rivers actually read my review; that does seem implausible.