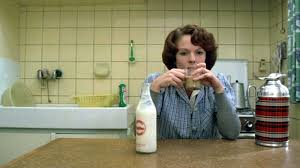 CAUTION: Pre-lockdown content. May include allusions to leaving the house.

Are there awards for audiences? Sometimes I feel that I deserve recognition for the efforts I make to catch one-off showings of alienating arthouse films – or at least, that they should pay me to see them. I fear, however, that art must be its own reward – which fortunately in this case it is.

I let fate dictate whether I would in fact go to see Chantal Akerman’s three hour plus film about a woman doing the housework, showing at the Cine Lumiere after work on a Thursday night – fate in this case taking the form of the number 25 bus, whose relationship to a timetable is notional at best.*

In this instance, however, it got me to the station in time, though not in time for me to grab anything to eat along the way, so that I arrived hungry for a very long film in which meals are prepared and eaten in real time.

Introducing the screening was academic Laura Mulvey, inventor (as it were) of the male gaze. I recently – belatedly – read Carol Clover’s book Men Women and Chainsaws, which is informed by, and critiques, this notion, pointing out that the male gaze is not merely sadistic but also allows for elements of masochism. I can vouch for this.

Certainly, and particularly on an empty stomach, the first hour or so of this film is something of an endurance test, as we observe the daily routine of the eponymous heroine (Delphine Seyrig) as – but not necessarily in this order – she cooks a meal for her and her son (not exactly haute cuisine either), has a bath, briefly looks after (but largely ignores) a baby for a neighbour and sleeps with a man for money.

This last might seem to add a note of eyebrow-raising lasciviousness to the mix but it takes place behind a closed door and she might as well be cutting his hair or reading his palm.

In fact, so absorbed is she in her routine that my spectatorship felt all but redundant. One of Akerman’s motifs is to linger on rooms a little after Jeanne leaves them, often turning off the light as she goes, suggesting perhaps that these rooms don’t really need her; that maybe her own life doesn’t really need her.

In a similar way I felt that I needn’t have gone to all the trouble of turning up – the film would have proceeded without me and I might have been engaged in vaguely similar actions to those of Jeanne Dielman in my own flat.

But then something happens. Although I don’t know what – all I can say is that after sleeping with a second man, she is different – distracted, haunted even. The rhythms of the film, so laboriously established, are now off-kilter.

Suddenly, even watching her peel potatoes is fascinating. An element of desperation creeps in, ambient sounds become ominous, and when the neighbour brings the baby round for the second time we wonder if we should fear for its safety (instead of ignoring it she obsessively fusses over it, making it cry).

We worry about what she might do – at the same time perhaps we should be celebrating the way her routine has abandoned her; isn’t this freedom? Or is it madness?

‘Spoilers don’t matter’, said Mulvey. Except maybe, she went on, in this case. This was not good news for me – in my attempts to decide whether to see this film or not I had used Google and the ‘twist’ here had leapt out at me, being quite prominently featured in a highlighted review.

It isn’t a twist as such but it is a last-minute jolt that seems to become what the film was really about all along. Mulvey said that it was ‘a different film’ when you knew the ending – so that is what I have seen: a different film. The original is lost to me.

All I can say is that the film I saw more than justified the hunger pangs and the journey, and the very action of leaving the house in order to watch someone voluntarily (?) stuck in theirs has retrospectively acquired a treasurable irony.

If you are looking for light relief from lockdown you probably shouldn’t bother. On the other hand, if you really want to plumb the depths of the domestic, even at the risk of driving yourself mad, this is ideal. Remember that you have to suffer through the first part in order to absorb the enormity of it – if you don’t suffer, you don’t get it.

I have no idea it is available, mind you. I saw it with an audience who were surprisingly young – perhaps they were being forced to watch it as part of a course. Outside I heard some of them rhapsodizing about the way Seyrig had turned lights off and on. Perhaps they were being ironic; perhaps I am.

Well no; or no more than usual. I know I don’t deserve a medal for seeing this. I’m not a hero – except perhaps, in Carol Clover’s formulation, a victim-hero.

*One situation improved by the Coronavirus.