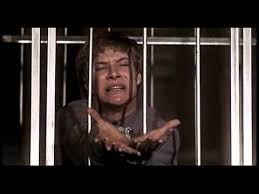 On this BFI DVD you get a couple of early short films from director Peter Watkins, one of which is 1961’s The Forgotten Faces, an urgent, authentic-seeming account of the 1956 people’s uprising in Hungary, filmed in Canterbury.

Therein lies the moral of much of Watkins’ work: it could happen here. Maybe it already has.

In Privilege, Paul Jones (at various times the lead singer of Manfred Mann and a Radio 2 DJ) plays a pop star who, despite being called Steven Shorter, has achieved such phenomenal popularity that the UK government is able to use him to exercise control over the population, from persuading people to eat more apples to staging a revival of Christianity that goes hand in hand with a reaffirmation of national identity.

To this end he appears on the same bill as ‘the Reverend Jeremy Tate’, a saturnine creature whose party piece is getting the audience to chant: ‘We will conform!’

A month or so ago this would have seemed a whole lot less plausible – it isn’t entirely plausible now but its satirical elements (it’s based on an original story by Johnny Speight) make the medicine go down a bit easier.

Of course it is young people who are the government’s main worry and their tendency towards rebellion is anticipated in a stage act that features Shorter caged and beaten by policemen – subsequently, a narrative arc is devised wherein he ‘repents’. Meanwhile assertions of his own personal identity in the face of all this become increasingly pathetic, like his demand for hot chocolate instead of champagne at a celebratory meal.

In the end, despite support from artist lover Jean Shrimpton, he is reduced to ‘nothing’, as he complains while accepting the Steven Shorter award for being Steven Shorter at a televised ceremony. His perceived ingratitude – though really it’s more like a nervous breakdown in public – serves to turn the populace against him, foiling the state’s plans to use him. Then he really does become nothing, vanishing into obscurity.

Neither Jones nor Shrimpton offer particularly energetic or expressive performances here, though this entirely suits their roles as manipulated creatures. It also prefigures the awkward ‘performances’ of the stars of ‘constructed reality’ shows. Watkins stages this as a documentary, with himself as detached narrator, adding a note of ‘authenticity’ which also creates distance, a suspicion about the manner in which ‘reality’ is being presented to us.

Of course nowadays politicians are celebrities, not just busy manipulating them – still, you only have to look at the way Boris Johnson has been ‘sold’ as the new Churchill (or, failing that, the new Jesus Christ) to see that Privilege is still relevant.

Also worth noting is the scene where the faintly Jacob Rees-Moggish MP overseeing (and profiting from) Shorter’s rise talks about the ‘exploded myth’ of liberalism and how people are ‘stunted little creatures’ who need to be taken in hand. I dare say this is being touted as radical new thinking in government circles even as I write.

I don’t suppose today’s celebrity politicians feel like ‘nothing’ – that doesn’t mean they aren’t though. Trump talks so much nonsense that despite being ‘the most powerful man in the world’ he seems to amount to nothing. It’s very hard nowadays to watch what is generally thought to be the best Marx Brothers comedy Duck Soup (showing on Sony Movies Classic) without thinking about Trump.

In Leo McCarey’s film Groucho plays Rufus T. Firefly, the new leader of Freedonia, though of course Groucho only ever plays Groucho, it’s just his situation that changes. The central joke is clear right from the start, but it never gets old.

As the assembled dignitaries breathlessly await the arrival of their new ruler, as the fanfare rings out once again (he’s late, having only just got out of bed) Firefly appears among them via a back entrance, professing to wonder who they are waiting for.

It is the contrast between the grand apparatus of state and the ridiculously unsuitable figure at the helm that provides the basis for the laughter. Firefly alternately insults and (because she has money) courts Margaret Dumont’s Mrs. Teasdale, he plunges into war with a neighboring country simply because he can’t stop himself feuding with their ambassador and during the war he opens fire on his own soldiers in error, then offers his secretary five dollars to keep it quiet.

You could see Duck Soup as a satire – of war, of the dangers inherent in giving one man too much power – but that implies that some kind of moral stance is being taken. One of the reasons this still feels so fresh is that it does no such thing.

It’s a commonplace to describe the Marx Brothers as ‘anarchic’ but here anarchy is more than just a comic mode – Duck Soup seems to elevate anarchy into a guiding principle for a nation-state.

Like Firefly, Trump is self-serving, whimsical, and unapologetic about his contradictions. But he differs from Firefly in one crucial way – however foolish he may appear, Firefly seems to know what he is doing. He is out of place but not out of his depth.

Firefly’s quick wit ensures that he normally gets the last laugh and although I have called him ‘self-serving’, this is only true on the surface. In fact he isn’t pursuing any agenda beyond that of overturning notions of sense and propriety. His allegiance is to absurdity.

On a certain level, Trump is playing the same game. Comedians are often said to start out making jokes to stymie schoolyard bullies. Trump is a bully, and fascinated by humour because it is the one thing that escapes him, that threatens to be ‘greater’ than him – look at his relationship with Saturday Night Live.

I suspect that Groucho is what he would like to be, a disruptive and amoral spirit of comic anarchy in the heart of power – in short, the greatest comedian ever.

However, being personally witless, he must settle for being a sort of comic character. In fact, he is possibly closer to Harpo than Groucho: it’s the weird hair and the inability – or refusal – to speak (of course Trump can speak but he contradicts himself so much that he might just as well be parping a horn). Though Trump is perhaps less scary than Harpo, with his borderline-psychotic stare.

But Trump doesn’t have to adopt a persona in order to become a comic character. In the context of politics, where maintaining an appearance of dignity has always been considered crucial, it is enough for him to ‘be himself’. Whatever the hell that is.

Whether the audience is laughing at him or with him doesn’t matter. We laugh at Groucho because he is ridiculous but we also laugh at the way his antics disrupt the solemn pomposity of the infrastructure around him. Trump’s enemies take the former position, his supporters the latter. But as far as comedy goes, there is no distinction between them.

Which is to say that those who think they are undermining Trump by laughing at him are in fact sustaining his act. You only need to think of that well-known series of clips assembling Trump’s many references to WikiLeaks, ending in one where he denies ever having heard of it. Whoever edited that together, probably thinking that they were catching Trump out, was actually honing his routine, giving it a build-up and a punchline.

(In the same way I’m guessing that somewhere along the line he gets a percentage from all those cards you see in Clinton’s* featuring his image beneath a message about ‘making your birthday great again’.)

There’s also a sense in which, if you laugh at Trump telling people to inject disinfectant (say) you are really laughing at the people who are dumb enough to believe him. Well so is he. So you have that in common.

The only way to destroy him would be to take him seriously, and by that I don’t mean inject disinfectant or react to his every little provocation with outrage. I mean don’t react at all. What kills comedy isn’t heckling, it’s silence.

But that would be like trying to watch Duck Soup with a straight face.