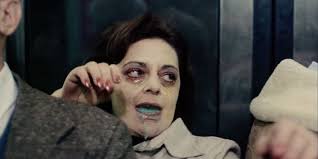 I watched this (on Arrow Video Blu-Ray) quite early on in lockdown, before the later symptoms of COVID-19 like frothing at the mouth with blue foam and biting people in the neck appeared.

Oh no wait, that hasn’t happened yet has it? Nevertheless this is like a documentary, depicting as it does a savage contagion sweeping through Montreal, its ‘Typhoid Mary’ being Rose (Marilyn Chambers) who spreads it through a vampiric spike that emerges from a hole in her armpit whenever she has sex with anyone. This is a side effect of experimental plastic surgery by the pleasingly-named Dr. Dan Keloid.

David Cronenberg stages the resulting chaos with considerable panache, as martial law is declared and ‘victims’ of the disease, who turn into slobbering maniacs, are gunned down. In one scene the men who have shot a victim attacking a car obligingly wipe the windscreen down afterwards – every contagion has its etiquette.

She becomes a sort of dislocated sex object, with even her genitals seemingly displaced, an illustration of the idea that sex, removed as it is from its strictly reproductive function is, as Cronenberg says, ‘up for grabs’ (or is it up for sale?)

Rose in her misery craves comfort and intimacy but sex is no longer about intimacy but precisely the reverse: it creates the (monstrous) other.

In the end, hardly able to credit that she is responsible for spreading the disease, she decides to hang around after a bedroom encounter and succumbs to her transformed partner while talking to her erstwhile boyfriend on the phone. Unable to help her when she is attacked he destroys the phone in frustration; her body is thrown into a dustcart.

Now this is social distancing.

Cronenberg brings his own kind of distance to bear on his material, his coolly detached approach to lurid events suggesting the idea that the rational and the pathological are closer bedfellows than we might have thought (naturally Dr. Keloid winds up as a drooling monster in the back of an ambulance.)

But even that distance itself is suspect – is it ‘objectivity’ or squeamishness? Or are they the same thing?

If you’re finding Rabid a bit too intellectual, Black Magic 2 (88 Films) from the previous year offers a simpler and far more familiar opposition.

Director Meng Hua Ho’s Hong Kong spectacle is, it won’t surprise you to learn, the sequel to 1975’s Black Magic but it is a lot more fun than its (still enjoyable) predecessor, to which – in terms of its characters at least – it is wholly unrelated.

A couple of doctors – husband Zhonping and wife Cuiling (Lung Ti and Ni Tien) – arrive at a Singapore hospital, where they are surprised to be told by friend and colleague Zhensheng (Wei Tu Lin) that many of his patients’ symptoms (pulsating sores, worms emerging from the skin) are caused by witchcraft rather than disease. ‘This is the Green Venom poison spell’, he pronounces authoritatively regarding some sores that resemble faces.

The doctor couple, on the other hand, are advocates of science, and the film proceeds as if it were an exploration of that age-old conflict between superstition and rationality. Although in fact it is totally bonkers.

One moment the doctors are discussing the ethical question arising from the need to perform an autopsy on a possible victim of black magic when it is likely that the traditionally-minded family won’t allow it; moments later they are out in the graveyard, digging up the corpse. It’s that kind of film.

The villain, a scowling magician called Kang (Lieh Lo), has an army of corpses which he restores to a semblance of life and health by banging long nails into the tops of their skulls. Despite being immensely old he maintains his youthful appearance by regularly quaffing breast milk direct from the source, to which end he hypnotizes Zhensheng’s wife Margaret (Lily Li) into paying him visits so that she can be ‘milked’.

In order to stimulate productivity he makes her drink a potion made out of ingredients which include her own burned pubic hair. This causes her, almost immediately, to become pregnant with a ‘monster’, which is removed by Caesarian section and disposed of – an incident so sudden and random that I quickly forgot about it, only remembering when I was reading about the film in the book Mondo Macabro directly afterwards.

I’d been wondering where Margaret had gone. In my defence the other characters seem to forget about her also, deciding that the only way they can prove whether black magic really works is for the non-sceptical doctor Zhensheng to ask Kang to cast a love spell on his colleague’s wife, to make her fall for him.

Naturally the spell works, and the situation then plays out (for a while) as though the two were having an affair – or perhaps they really wanted to have an affair, and this is an odd kind of subterfuge that allows them to conduct it with the full knowledge of the cuckolded husband (whose scientific detachment soon collapses when he follows them to a hotel room).

Speculating on these characters’ motives is, however, fruitless. There is little time for psychology, or even thought, in a film whose main motivation is hurtling on to the next set piece. There is time, however, for a punch-up on a cable car. It’s a question of priorities.

Margaret comes back eventually, but before long there’s a nail in her head and she’s a zombie doing Kang’s bidding, as is her husband. Cuiling looks set to go the same way, except that there’s an intervention from a benevolent white-haired magician, who appears out of nowhere to start beating her about the body with what looks like a dead fox. Apparently, this helps.

The magician, who was in an earlier sequence involving an alligator which had absolutely nothing to do with any of this as far as I can tell, then expires due to Kang’s counter-spells, but not before popping out his own eyes and urging Zhonping to swallow them, which he later does. By this time, needless to say, his scepticism is no longer quite so pronounced.

These ‘wise eyes’ give Zhonping some of the necessary ability to defeat Kang and his hordes, though the decisive factor proves to be an amulet with a glowing red jewel, also a gift of the old man, that causes Kang to burn up for some reason.

Superstition, it seems, has won, although perhaps it is all just a matter of science now taking these learnings on board, going forward.

Black Magic 2 is in its way quite as chaotic as Rabid, but at least there is a happy ending, even if it feels like this is more down to dumb luck (or other-worldly intervention) than judgement. One of our own ‘learnings’ might be that in these fast-moving ‘unprecedented’ situations, however much we might pretend otherwise, we have little or no control over events. Even if we are ‘following the science’.