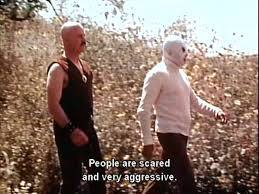 Just when you thought it was safe to go back to the cinema… it IS safe. Oppressively so.

I don’t know about you but walking into a room full of people in surgical masks doesn’t ‘make me feel safe’ – it makes me feel uneasy. And so I haven’t joined the rush to get back to the cinema, if indeed there has been one.

The craze for masks has come upon us like an under-explained plot development in a big-budget, high-concept movie. We may think we can foresee the twist (the masks turn out to be useless) but still we have to go along with it.

I saw a thing on Facebook comparing people who don’t wear a mask to the ridiculous characters in horror films who venture into the ‘murder basement’ alone. I didn’t bother pointing out that, in horror films, the people wearing the masks are invariably the maniacs.

Then again, there are exceptions. Forced back once again on my DVD collection I dug out these two adventures of the famed Mexican wrestler who is never seen without a mask (albeit one that doesn’t offer mouth coverage) but who is definitely on the side of the angels and very much against zombies, vampire women, Martians, stranglers, mummies and Frankenstein’s daughter, to reference just a few of his outings over the years.

My first surprise on viewing this DVD from the now presumably non-existent Yume is that it is subtitled, not dubbed. Not always accurately subtitled mind, though I was pleased by the comma they added to the title – Santo, In The Wax Museum – lending it a thoughtful, even poetic quality.

Thoughtful and poetic are not the first words to spring to mind when considering the film as a whole, though the villain is more philosophical than you might expect.

Described in the subtitles as an ‘imminent doctor’, Dr. Karol (Claudio Brook) – proprietor of the titular wax museum – is a concentration camp survivor who scoffs at the idea of man as the ‘rational animal’ and decides to express his Weltschmerz by creating ‘a world of physically deformed beings where one can see the face of the apocalypse’.

Although his more experimental work is displayed in the chamber of horrors downstairs, the first exhibits we encounter here are (rather good) renditions of Gandhi, Stalin and Gary Cooper. These are undoubtedly made of wax but it will come as no surprise to viewers of horror films that this is not the case with all of his dummies, and the disappearance of a number of people in the vicinity of the museum only serves to confirm our suspicions.

Suggesting that someone is ‘trying to make me look bad’, it is the sly Dr. Karol himself who engages the services of Santo, a busy man who, when not engaged in crime-fighting and mystery-solving, has to take time out for wrestling bouts, at which point the plot is suspended – ‘We’ll have to wait until he’s finished’, says one character apologetically.

In keeping with other ‘wax museum’ horror films like House of Wax, Dr. Karol is hideously scarred from a historical incident, but curiously the expected scene where his wax mask cracks to reveal his true, hideously-disfigured, features never appears. It seems that – although we get to see the scars on his hands and chest – his face escaped the conflagration.

It’s disappointing, but possibly explicable in terms of mask etiquette. After all, if your hero wears a mask all the time, do you want to give the impression that this might be because he is concealing something horrible beneath it? This may be why Santo never ‘met’ (as far as I know) the Phantom of the Opera, though he does feature here as a dummy (without a mask).

There is nothing ambiguous about Santo, who is endearingly unassuming for someone who wears a glittery cloak, and oddly formal in his mannerisms (despite his shirtlessness), dutifully waving goodbye to the rest of the (surviving) cast at the end.

In keeping with this, and with its setting, the film, directed by Alfonso Corona Blake and Manuel San Fernando, has a certain stiff formulaic quality that makes it slightly less fun than you’d expect though there is plenty of rough and tumble and Santo is even ‘killed’ at one point by a knife in the back – but don’t worry kids, he was only pretending.

Dr. Karol turns out to be a sort of inverse Dr. Moreau, not just coating corpses in wax like your average maniacal wax museum owner, but turning human beings into bestial creatures and keeping them alive – but paralysed – in a procedure that still, confusingly, involves wax.

His plan is to turn the heroine into a panther woman (another nod to Moreau), but naturally Santo turns up in time to prevent this, fighting off not only a couple of henchmen but some of the reanimated ‘waxworks’ as well – though not Gandhi or Stalin (another disappointment). Dr. Karol naturally falls victim to his own monsters, leaving Santo to provide his epitaph: ‘He died in the hell he himself created’.

(The year before this Claudio Brook – who brings a certain dignity to his role here – was in Luis Buňuel’s The Exterminating Angel, in which dinner party guests find themselves inexplicably unable to leave the communal room in which they have been eating, drinking and dancing, and subsequently descend into savagery while the people outside – inexplicably unable to enter – wonder what the hell’s going on.

At one point the suggestion is made that the people inside are ‘infected’ but if so it is with a derangement of social etiquette rather than plague.

The dinner party guests turn to magical rituals in their efforts to escape their plight but only find freedom again by re-enacting the moment at which they should all, under normal polite circumstances, have gone home – the observation of these formalities being, in essence, another kind of ritual.

Then they are unable to leave the church to which they have gone to give thanks for their deliverance.

And what of us, stifled by masks and keeping a precisely-measured distance from our neighbours? At some point, aren’t we going to have to abandon these rituals and try to revert to the old script? Or are we just going to tear up the script entirely?)

SANTO VS. THE SHE-WOLVES

Directed by Rubén Galindo and Jaime Jiménez Pons, this later outing is a good deal more colourful than Wax Museum. For a start it’s in colour.

Beyond that it has almost entirely abandoned formality. Instead of discreetly keeping its distance the camera moves around constantly and gets thoroughly involved in Santo’s activities both inside and outside the ring. The effect of watching this just after Wax Museum is like going from the Universal horrors of the 30’s and 40’s into the dreamed-directly-onto-celluloid 70’s excesses of Jess Franco.

That said, there isn’t any sex, and Santo is more conventionally dressed in this one. He is propositioned twice by women (including the Queen of the Werewolves), only to politely decline. ‘We’ll discuss this later’, he tells one lovestruck admirer towards the end. ‘Right now we need to save those children’s lives.’ Ah yes, that old excuse – what’s really going on behind that mask, I wonder?

In fact, the general air of looseness compared to the earlier film was such that I almost expected to see Santo’s face exposed, and there is a tantalising shot of his mask hanging up while he takes a shower.

The plot has Santo called in by ‘Cesar Harker’ (a wholly unnecessary Bram Stoker reference) to investigate a werewolf uprising led by Licas, King of the Werewolves and his Queen, the ‘Silver She-Wolf’, who we see being ‘elected’ in a ritual at the start of the film.

Judging by her panic, it seems that being chosen as Queen of the Werewolves is an honour that is thrust upon one, rather than something long dreamed of from girlhood – but once attained it is carried out with undeniable enthusiasm. This opening scene is actually quite sinister, even if the she-wolves, with their fur bikinis and unruly sideburns, merely look like demented cavewomen.

As part of her reign of terror our Silver She-Wolf kills Cesar, only to be killed herself, leaving the position vacant once more. As for Cesar he is swiftly replaced by his identical twin brother Erick, played by the same actor (Rodolfo De Anda), making the death seem less like a tragedy than a continuity error.

Much is made of the fact that Santo’s silver mask makes him a natural enemy of the werewolf, whose antipathy to silver is well known, but what, then, are we to make of this ‘Silver She-Wolf’? When this apparent contradiction is pointed out, Cesar (unless it’s Erick by that stage) says to Santo: ‘Your encounter will be definitive.’

Not much here justifies the word ‘definitive’ – even the blurb on the back of the DVD seems to be describing another Santo film entirely. I don’t think ‘Zorina, the vampire queen’ makes an appearance here, unless I missed it.

Admittedly this is quite possible because the print is of markedly poorer quality than Wax Museum‘s, and it is often hard to make out what is going on – though not to the extent that we can ever pretend that the ‘wolves’ that occasionally attack the characters are anything other than Alsatians.

Nevertheless, this is all perfectly in keeping with the storyline’s incoherence. At times you get the sense of some hard-to-decipher ritual taking place in front of your eyes – the wrestling matches, no better integrated into the plot than in the previous film, sit alongside the obscure supernatural happenings as if they were rituals in their own right.

At one point the locals in Cesar/Erick’s village even turn on people’s champion Santo and his sidekick, Gipsy (Carlos Suárez), because they are ‘scared and aggressive’, at which point you start to feel like elements of a paranoid conspiracy thriller are kicking in. As for Gipsy, part hero and part comic relief, he is a bald guy oddly resembling Jackie Wright, who used to fulfil a slightly similar function for Benny Hill on his TV show.

Everything comes to a head at the time of the ‘Great Red Moon’, when the new Queen will be chosen. Its light fills the screen with a crimson murk that makes it even harder to distinguish what’s happening in the final confrontation between our heroes and the werewolf hordes (male, female and canine).

The climactic battle between Santo and Licas is particularly murky, allowing the film to attain an almost perfect balance between visceral energy and abstraction in its closing moments. Licas is thrown off a cliff and the Great Red Moon becomes, in a final flourish of astronomical improbability, the morning sun, which Santo regards with (presumed) satisfaction as the film ends.

Had he not prevailed, almost everyone (including Santo) would have become a werewolf, and quite possibly the sun would never have risen again. It is reassuring in these times to know what a masked man can achieve – but worth remembering that a mask is not necessarily a silver bullet.