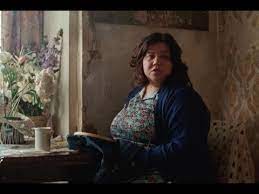 For many years the TV series Downton Abbey, created by Julian Fellowes, mined the Sunday night craving for reassurance about the past, presenting it as a world in which everyone knew their place. The past, at least the past we never knew personally, is a safe space, precisely because we can’t enter it and fuck it up with our unending contrariness. It’s done.

Downton was safe enough to become a brand, used to sell ‘lifestyle products’ – I’m pretty sure I’ve seen it on the side of a lorry. It’s emergence as a film in 2019 seemed almost beside the point, like one of those TV comedy spin-offs Hammer Films used to do (eg; Mutiny On The Buses) and which are surprisingly still with us today (see Mrs. Brown’s Boys D’Movie – or rather, don’t).

There is a slight air of Acorn Antiques about the Downton film, a sense that the transition to the big screen has left it looking just a bit shabby and desperate. The use of the familiar theme music naturally leads you to expect a commercial break, and suggests that the film may be to some extent a commercial itself – for ‘lifestyle products’.

We also might be reminded that Julian Fellowes won an Oscar for his screenplay for Robert Altman’s film Gosford Park, a superficially similar project that actually did make some attempt to immerse us in the past. But that’s all in the past (2001), and when approaching Downton we should adopt the mantra: forget the past.

Fellowes often seems to, though I sometimes wonder whether he peppers the script with anachronistic phrases deliberately to see if anyone notices. Here we have glib references to ‘working nine-to-five’ and ‘conspiracy theories’ that don’t sound quite right for 1927, though what do I know? It may well be that Lord Grantham was the very first person in history to use the phrase ‘That went well’ sarcastically when something didn’t go well – the words were available after all.

And perhaps there was a massive gay club in the middle of York that was occasionally raided by the police, as happens when butler Thomas (Rob James-Collier) pays it a visit. The suit-wearing men in this vast warehouse are dancing to live jazz, but had it been throbbing industrial techno I doubt if anyone would have batted an eyelid.

Fellowes’ way of justifying the grander platform of the cinema screen is fairly predictable – a royal visit, which even gives rise to an assassination attempt, though this is resolved so quickly by ex-chauffeur Tom (Allen Leech) that it seems little more than a passing nuisance.

Tom aside, the folks ‘upstairs’ come across as blandly ineffectual here – even the acid remarks of the Dowager Countess (Maggie Smith), which were the best part of the TV series, aren’t as sharp as they could be. Downstairs, however, Fellowes manages to have his cake and eat it, as the servants stage a sort of ‘revolution’ against the staff of the Royal Household, who are intending – as protocol demands – to take over their duties for the duration of the visit.

Kitchen maid Daisy (Sophie McShera) proves to be a staunch Republican and even Carson the butler (Jim Carter) emerges from retirement to thwart the King’s men, for all that this makes nonsense of his long-established commitment to doing things strictly by the book – and undermines, in fact, the very notions of tradition on which the popularity of the series is based.

Perhaps this is mischief-making on Fellowes’ part (or a nod to Mutiny On The Buses), though all it really amounts to is testing the elasticity of the brand. At the end we find Carson predicting that Downton Abbey will survive mostly unchanged for another 300 years, and while he is talking about the house itself, he might more plausibly be speaking of the Downton brand’s ‘sustainability’.

More recent TV shows like The Great and Bridgerton make the historical liberties Downton takes look quaint in comparison (though quaintness is itself part of Downton‘s appeal, so that’s covered). Terribly knowing as these shows are, it all rather suggests that we can’t look history in the eye anymore.

Perhaps what we need is to agree on a suitable fiction to replace the past. Perhaps that’s what Bridgerton is.

Nostalgia gets a bad press. It is dismissed as cosy, but also reactionary, as if it implied an actual plot to re-establish the conditions of the past.

This ignores the fact that nostalgia, like neuralgia, is a sort of pain. A direct translation implies a form of homesickness.

And so, if nostalgia is to be taken as a pleasure, it is a sophisticated one, a bittersweet one. True nostalgia is predicated upon the understanding that you can’t go back – it is saturated with melancholy and yearning.

Though quite possibly the pleasure too derives from the very awareness that you can’t go back: in Ray And Liz the past is home, though is it one you’d want to return to?

Richard Billingham’s film is based on the photographs of his family which made him an art world celebrity back in the ’90’s, photos which might have been seen as a voyeuristic look at the lives of ‘common people’, except that such considerations were already built in to the concept, as was Billingham himself.

Here, the young Billingham (Jacob Tuton, then Sam Plant) is almost a voyeur himself, retaining a certain smirking distance from events, as befits a modern artist, and sometimes precipitating them. The Billingham household was not run like Downton Abbey, according to a time-honoured system, nor transfigured by love. Apathy governed it. This was life lived ‘with no meaning or control’, as the song has it.

Though in some ways everything is in its place, like the massive jar of pickled red cabbage kept in one of the kitchen cupboards, whose contents Billingham’s younger brother Jason (Joshua Millard-Lloyd) seems to subsist on. ‘Don’t they feed you at school?’, his mother Liz (Ella Smith) asks, observing him as he helps himself.

Later, the boy goes missing and his parents barely notice, Liz casually greeting his reappearance a few days later in the park, where she is wheeling a pram with a rabbit in it, with: ‘Coppers have been looking for you’.

But everything is in its place because it is in the past, where everything is fixed, and it is rendered in such exquisite detail that, however squalid it might seem, it still seems to be suffused with a poignant ‘nostalgic’ glow.

Billingham’s images are beautiful in a way that easily outshines the mere gloss of Downton even though what they depict – such as the early scene in which Ray’s mentally-challenged brother Lol (Tony Way) is humiliated by the Billinghams’ nasty lodger Will (Sam Gittins) – is often deeply unpleasant.

(Or perhaps this is a manifestation of my own nostalgia, since I haven’t seen this film since I caught it at the ICA in 2018, when you could do such things, on a whim almost. Those were the days!)

The film itself moves back and forth between the 1980’s and the present, where Ray (Justin Salinger then and Patrick Romer now) lives alone, and spends his entire life in one room, the one bright spot in his existence the homebrew a friend brings him daily: he too is fixed.

As well as conveying the ambiguous pull of the past, Ray and Liz also says something about the clinging nature of poverty, refuting glib statements – particularly prevalent in the 80’s – about people from disadvantaged backgrounds ‘getting out’ and ‘bettering themselves’. (Billingham did, of course, but only by turning his background into a foreground, and selling it).

The past will only ever be a picture, and maybe that is just as well. In the future there is at least hope; in the past, where everything is already decided, there can be none.

Thus, to actually enter the past, whatever kind of past it was, would be like passing through the gates of Dante’s Hell – abandoning hope would be a condition of entry.