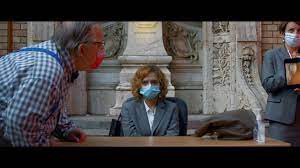 Ah, masks! Still de rigeur at the ICA at this point (this was before Plan B kicked in). During the London Film Festival I dared to go in there unmasked, which felt like a transgressive act, but hey, it was a festival and anyway isn’t the ICA supposed to welcome transgression? The books on sale in the lobby would seem to suggest this.

I saw Radu Jade’s film outside of the festival, however, so was back to meekly donning my ‘muzzle’ (as one of the characters here refers to them) at least until I was in the auditorium.

Funnily enough I’d been reading a book about Mary Whitehouse*. She would not have enjoyed this film, which is about a schoolteacher whose sex tape goes viral, and which begins with the tape, so that we are thrust right into the action. However, the case of Whitehouse certainly throws an interesting light on our own cultural moment.

She led a Christian crusade against ‘libertarians’ that was doomed to fail because society was in the process of loosening up and was bound to regard her (correctly I think) as a mad old bat desperately trying to put everything back in a box that had fallen apart long before.

That cultural dynamic – of traditional unenlightened repressed-and-repressive forces vs. sexy ‘freedom’ (with freedom naturally on the winning side) – has largely persisted in the mainstream, from the 60’s up until very recently.

But in many ways COVID changed the dynamic, and practically overnight. Suddenly ‘libertarian’ became a term of abuse and it was the former liberals who were now repressed-and-repressive, primly donning their masks and keeping their ‘social’ distance and insisting that everybody else do the same.

I seem to recall a stunned-looking Paul Morley in the early days of the pandemic, asked for his reaction to the COVID restrictions, declaring that it meant ‘the end of rock and roll rebellion’. He went on to write a book about classical music.

Of course it wasn’t the end of rock and roll rebellion, it’s just that this ‘rebellion’ may be coming from a different source in future – for example, Downing Street, where they were all apparently partying down while the nation cowered in terror. It doesn’t seem impossible that one day they will not only be forgiven for this, but widely admired.

Bad Luck Banging is a Romanian film, so the cultural references are different and quite opaque to the ignorant, such as myself – nevertheless this is the first film I’ve seen that conveys even a fraction of the cultural turbulence** that COVID has brought into our lives. It’s bold, unpredictable, and a little crazed. I have seen positive reviews from both sides of the political spectrum, though neither side sounds quite convinced.

Having thrown the sex tape in our faces the film turns semi-abstract, following the heroine Emi (Katia Pascariu) through the Bucharest streets, where the camera keeps being distracted by, and lingering on, advertisements, shopfronts, walls of ruined buildings, with what could be contempt or childlike wonder, I couldn’t tell and it didn’t seem to matter.

Jude calls this film ‘a sketch’ and perhaps one of its ‘morals’ might be that it isn’t necessarily a wise idea to make up your mind too quickly – or possibly at all. The second section of ‘anecdotes, signs and wonders’ takes us entirely out of the (barely established) plot to regale us with images, plus texts from various sources, to form a parade of, as I remember, historical atrocities interspersed with jokes.

The jocular tone is, I suppose, a way of reminding us that it’s all too easy to sit back and judge the excesses of the past from our ‘privileged’ historical perspective – humans are still capable of anything, good and bad.

And this feeds nicely in to the third section, wherein Emi is subjected to a semi-official trial by the parents of her pupils, a motley crew of anti-Semites, pseudo-intellectuals and fascists, that soon becomes chaotic. Masks are everywhere. The only voice that speaks out against them belongs to an unsympathetic right wing military guy who calls the other attendees ‘sheeple’ (before donning a far better quality mask than those around him).

Nevertheless the masks – a major ingredient in the film’s comedy – are a long way from being symbols of ‘collective responsibility’ (as Mark Drakeford might put it) and more closely resemble the aforementioned ‘muzzles’, barely restraining characters who are incessantly sniping at one another.

Although Jude doesn’t want to make it easy for us to ‘take sides’ there’s no doubt that the film is on Emi’s side, but we sympathize with her as a fallible human being rather than from any moral or ideological perspective.

You could see this as a joke about the fatuity of movie solutions or as an expression of frustration with conventional responses, but you really shouldn’t be worrying about ‘what it all means’ or possibly thinking about it at all. It’s fun, pure and simple; or corrupt, and complicated.

*Ban This Filth! Letters From The Mary Whitehouse Archive, edited by Ben Thompson

**This is what some people call ‘culture wars’, in the apparent belief that one side will eventually ‘win’.