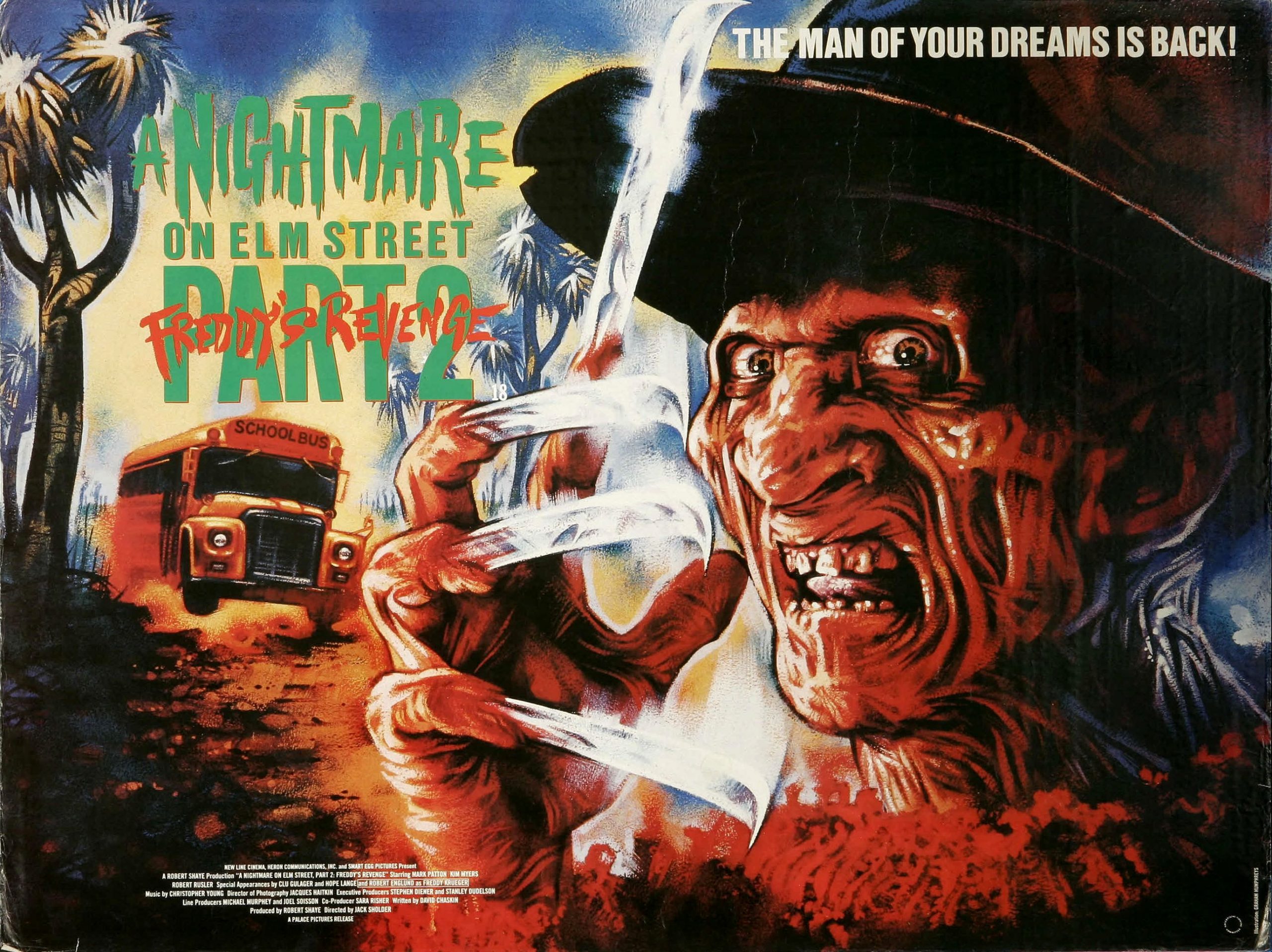 The London Lesbian and Gay Film Festival has renamed itself Flare. I’m not sure what I think about this – immediate associations that spring to mind (trousers, nostrils, distress signals) are not exactly encouraging. Also, if someone told me: ‘I’m going to Flare’, my immediate impulse would be to dive behind the nearest available sofa.

But I suppose the idea is to be more ‘inclusive’. And indeed, the festival is now so inclusive that it has room for Freddy Krueger. That has to be a good thing, doesn’t it?

Nightmare On Elm Street 2 was billed here as ‘the Citizen Kane of gay horror’. I’m not sure if NOES2 is the Citizen Kane of anything – even of disappointing sequels – but it might just be the only horror film to feature an exploding budgerigar.

The film has Robert Englund’s Freddy preying on sexually-confused teen Jesse (Mark Patton) in an attempt to get inside his body. Perhaps you can see where this is going already – essentially, Freddy becomes the nightmare face of Jesse’s unease over his sexuality. However, because this is a mainstream horror sequel from 1983, everything is implicit – so implicit that even director Jack Sholder apparently wasn’t aware of it.

When a director states that he wasn’t aware of his own film’s underlying theme, you start to wonder if that theme is even there. However the first scene of NOES2 (after the initial false start that turns out to be a nightmare) seems to show a film that knows exactly what its about: Mum, Dad and small daughter sit at the breakfast table in a tableau that could just as well be from the 50’s as the 80’s. They are startled – but not all that surprised – by a scream from upstairs, and the little girl asks: ‘Why can’t Jesse wake up like normal people?’

This earns the only laugh of the night that I’d call intentional. There’s a decided air of camp about the scene, and the establishment of a distinction between Jesse and ‘normal people’ is telling. The film goes on to explore Jesse’s sexual confusion through his relationship with aspiring girlfriend Lisa and handsome best friend Grady and becomes most explicit in a locker room sequence wherein Jesse presides over the murder of his gay gym coach (a frequenter of S&M bars, we are told) during which the coach is assaulted by balls of various kinds, tied up by skipping ropes and savagely smacked on the bare arse with towels, all at the behest of Freddy. None of which displays the wit of that first scene. Indeed, we are soon reduced to laughing at the hero’s name (‘There’s a Jesse on the phone for you.’) or – as programmer Michael Blyth advised us beforehand – a board game in Jesse’s closet called ‘Probe’. But we do laugh. There is fun to be had here.

And then there’s the exploding budgie. ‘Must be that cheap seed you’ve been buying’, Jesse’s Dad accuses his Mum – another flash of wit (doesn’t raise a laugh though). But the key thing about this moment is that it doesn’t take place in a dream, though it’s odd enough that you might expect it to. The first Nightmare On Elm Street works by exploiting the ambiguity between dream and reality (and by suggesting that suburban America is itself a kind of dream) – here the ambiguity has become apathy. You get the distinct feeling that the makers at some point ceased to care whether these events are really happening or ‘only’ happening in a dream – it’s only a horror film after all, who the hell cares? I mark this as the Point of the Exploding Budgerigar, and sadly it’s all downhill from there in terms of a working horror film. Still, as I said, a fun night out, and if they make this a regular feature of Flare I won’t complain, no matter how spurious the choices get.