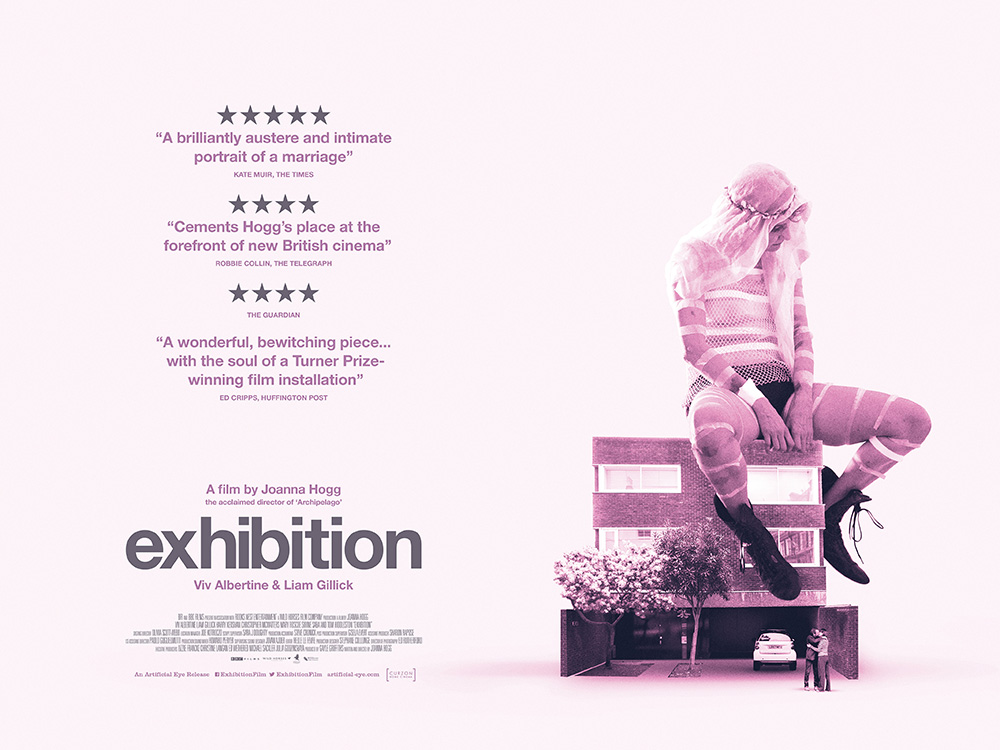 Director Joanna Hogg’s first two films – Unrelated (2007) and Archipelago (2010) – are about upper-middle class English families on holiday in Tuscany and the Scilly Isles respectively. They were more interested in absorbing you in a landscape and situation than in telling a linear story but they were well-observed, well-crafted and very approachable – even my Mum liked Unrelated, or at least she didn’t fall asleep.

Exhibition is slightly more forbidding. I don’t think my Mum would like it.

For a start, we aren’t on holiday anymore – we’re at home in London with a couple known only as D (Viv Albertine) and H (Liam Gillick). Both are artists. The contraction of their names into initials suggests both the warm familiarity of a long-term relationship and a chilly Kafkaesque alienation, and it is in the space between these different states that the film does its work. That space is – literally – the stark modernist piece of architecture the couple have lived in since they were married and which they are now selling (unwillingly in D’s case.)

From the fragmented glimpses we get into the lives of D and H it seems fairly clear that the decision to move, apparently never hers, has profoundly unsettled D. It is as though their relationship is just a function of the house (in some scenes the couple appear only as reflections in its windows) and is now called into question. Does H’s insistence on moving reveal him as, after all, inimical to D? Some kind of monster? Ominous groans and rumbles from the house disturb D, and the outside world keeps impinging on her awareness in the form of alarming noises from the street and Tom Hiddleston, playing an estate agent.

The title alludes to this enforced opening up of their lives to the world (and to the viewer) – and also, of course, to art. When D resists the move and all that it entails, it is through a passive identification with the building (shots of her slumped against or wrapped round one ‘feature’ or another) and through playing dead (becoming an unresponsive object during sex, staging a faint at a dinner party), but when she confronts her unease she does so by exploring the thin line between performance art and masturbation in front of a window – by flirting with self-exposure, making a tentative exhibition of herself. Eventually she adjusts, recovers her confidence as an artist, and the couple – plus assembled party guests – celebrate their taking leave of the house by eating it in cake form. I do like a happy ending.

Anyway I think that’s what happened. While I was watching the film I was thinking maybe they should get out of the house. Go on holiday. Tuscany’s nice, I hear. It was only afterwards that it all came together in my mind – or I reinvented it. Which is probably the whole point, if this is about the way experience is shaped into art, a faltering process analogous to what I am going through now as I write this. Have I finished yet? I don’t know. No, I haven’t.

There is an undertone of dread, which I was aware of but didn’t quite feel – and I do like an undertone of dread, even more than I like a happy ending. The scene that made most sense to me (I don’t know why) was the only one that abandoned the naturalistic entirely – where D goes out to attend a Q&A between herself and her husband and sits in the audience watching herself onstage. No doubt, after a suitable period of time has elapsed, I will watch this film again, and it will prove to be about something else. Viv Albertine was in the Slits you know. She released a solo album in 2012, which I have considered buying. This film has made me slightly more inclined to do so.