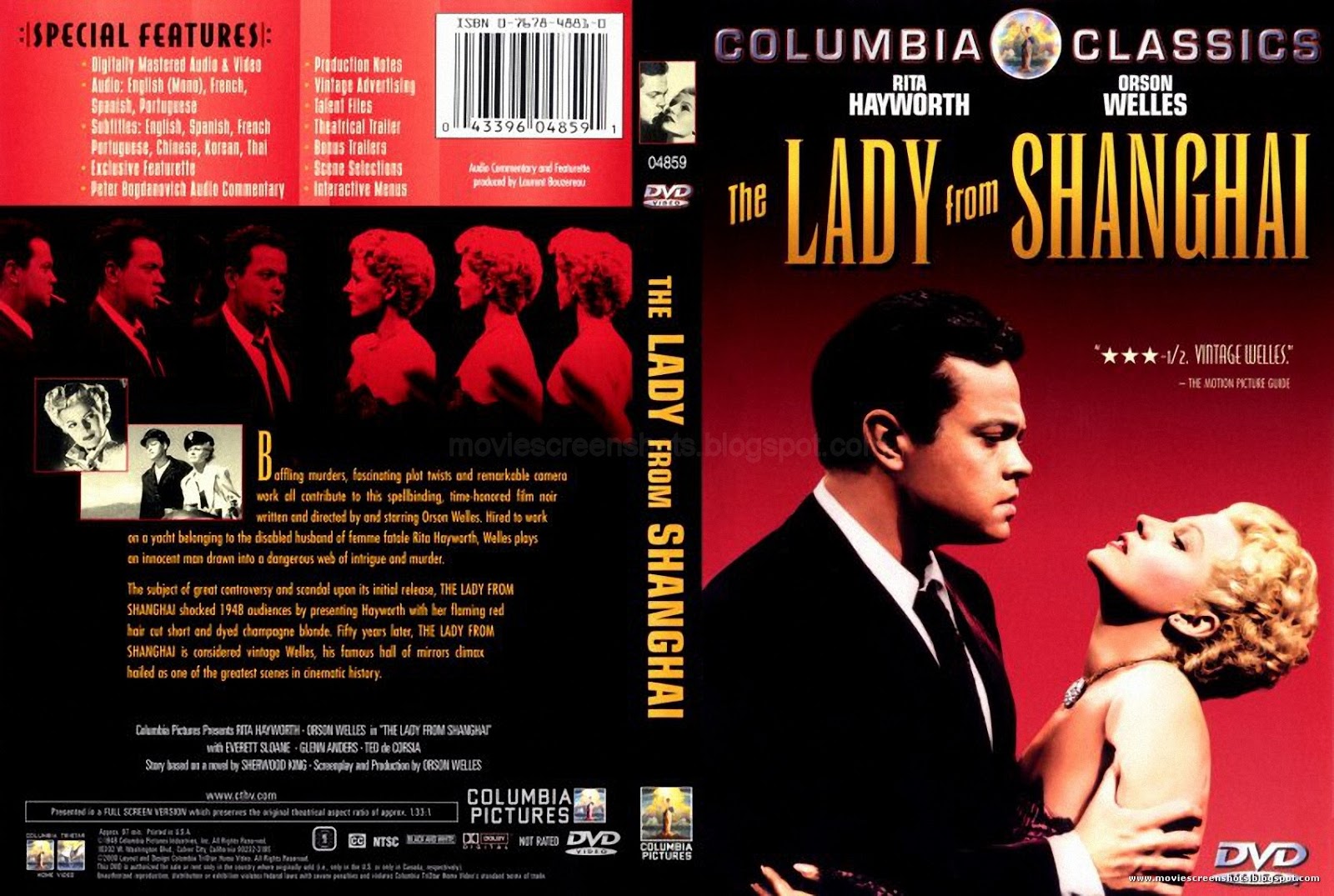 Orson Welles’ Irish accent in The Lady From Shanghai is perfectly emblematic of the film itself: you can’t quite believe it yet you can’t quite disbelieve it either. Welles’ character, a sailor called Michael O’Hara, falls in love with Rita Hayworth’s lady of the title (Is she from Shanghai? I think she’s been there) and becomes embroiled in a crazy man’s plot to kill himself, or pretend to. The plot is in the hands of (rich) people who hardly seem to know what they are doing or why they are doing it – so we can ignore it, and just enjoy the blood-tinged froth it generates.

The crazy man is Grisby, played in compellingly eccentric fashion by Glenn Anders. The plot to not really kill himself unsurprisingly ends up with him really dead, and Welles on trial for the crime. There is a courtroom scene with an air of Lewis Carroll about it – the defending lawyer (the lady from Shanghai’s husband and therefore Welles’ love rival) calls himself to the witness stand for cross-examination, and a man keeps distracting everyone by sneezing. Welles winds up in ‘the Crazy House’, not an asylum but a funfair attraction with a Hall of Mirrors in which – as is well known – the characters shoot at each other, unable to tell if they are destroying images or real people. When you think about it, the distinction is somewhat academic. Thrillingly so.

The Chinese element in The Lady From Shanghai is probably only there to add to the magnificent delirium. Before he goes to the Crazy House, a drugged Welles stumbles into a theatre to take in a Chinese opera. What does he see? As I stumbled, dazzled from Welles’ vision of ‘a bright and guilty world’ from one screen in the BFI to another, I wondered if I had found my answer in an authentic Chinese film: Ann Hui’s The Spooky Bunch.

Here, the atmosphere of chaos, offstage and on, attending a shambolic Cantonese opera troupe is not made any less chaotic by the appearance of a ghost called Cat Poo, who steals the troupe’s fish balls. Worse, she is ushering in a whole regiment of dead soldiers seeking revenge on the ancestors of merchants who poisoned them with fake medicine. Adding to the confusion (from my point of view) were mistimed subtitles, a complete ignorance of Cantonese opera and Chinese culture in general, and the fact that, in the BFI programme notes, ‘Cat Poo’ was called ‘Cat Shit’. Was ‘Cat Poo’ a more polite subtitling or a more technically accurate one? Nobody was around to ask.

But it didn’t matter. You abandon yourself to the confusion, the sudden shifts in tone from the comic to the eerie, the gracefully wild camerawork by Tony Hope, and the overall effect is exhilarating. The grim determination of the vengeful spectres is offset by the impishness of Cat Poo (or Shit) and also that of the amusingly childish heroine, Ah Gee (Josephine Siao Fong-fong) – towards the end they become one and the same, for a time. However, tradition is not to be overlooked, and it takes a Buddhist priest firing rays of holiness to finally despatch the ghosts. Even, then, one remains to invisibly bounce a ball, which in the final freeze frame eclipses the sun, leaving us with the perfect emblem of the film’s blend of the ominous and the playful.