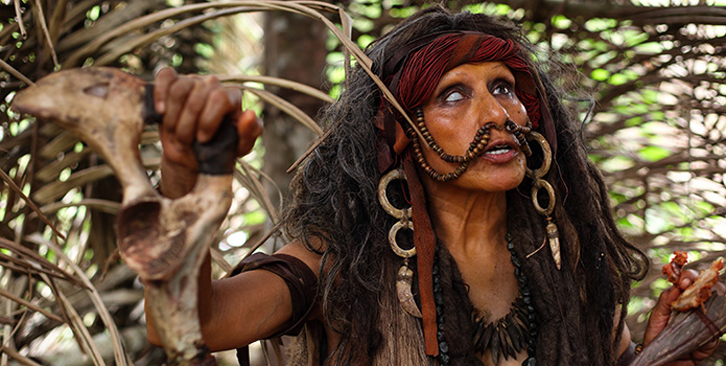 Movies such as Umberto Lenzi’s Cannibal Ferox and Ruggero Deodato’s powerful Cannibal Holocaust really do seem to belong to a certain time and place – 70 and early 80’s Italy – so it was intriguing to see how Eli Roth of Cabin Fever and Hostel fame would fare in bringing this genre into the age of political correctness and ecological awareness. As it turns out – kind of badly.

Lorenza Izzo plays Justine, a student drawn into a protest group by a sense of guilt and a hankering for the dishy leader, Alejandro (Ariel Levy). Without much preamble she finds herself accompanying them on a foolhardy jaunt to the Amazon to prevent frackers massacring a remote tribe. And though they are successful, their plane subsequently crashes and they are captured by the very tribe they were trying to save. Needless to say, the tribe have a funny way of expressing their gratitude, and soon the protesters are playing their own small part in ending world hunger. That’ll teach them for having ideals!

Beyond this heavy-handed irony the film struggles to find a reason for being – even the gore (bar one early butchering) is surprisingly tame. At one point one of the captives impregnates the cannibals’ latest meal with his stash of pot in the hope of distracting them – he is successful but then falls victim to the cannibal ‘munchies’. It’s the film’s best joke, and made me wonder if the entire film hadn’t been constructed around it.

The best part is right at the end, where the lone survivor (or so everyone thinks) tells the world an ecologically-sound fable about her captors being a harmless tribe whose only concern was getting her to safety instead of a bunch of cannibals who tried to circumcise her. We don’t know whether she says this because she is traumatized, or out of guilt and self-interest (she has abandoned Alejandro to the cannibals) or even for political reasons, but at least there is some interesting ambiguity here – it would have made a good place to start in fact.

Unfortunately, it’s the end, and I can’t say that I’m looking forward to a sequel. The film is strangely devoid of tension and further handicapped by its insistence on throwing female genital mutilation into the mix. This ‘issue’ sits uneasily in a context of lurid exploitation, rather spoiling the fun – or it would have done if there’d been any. The Green Inferno has apparently had its cinema release postponed, perhaps indefinitely. Anyone thinking of mounting a protest should probably think again.