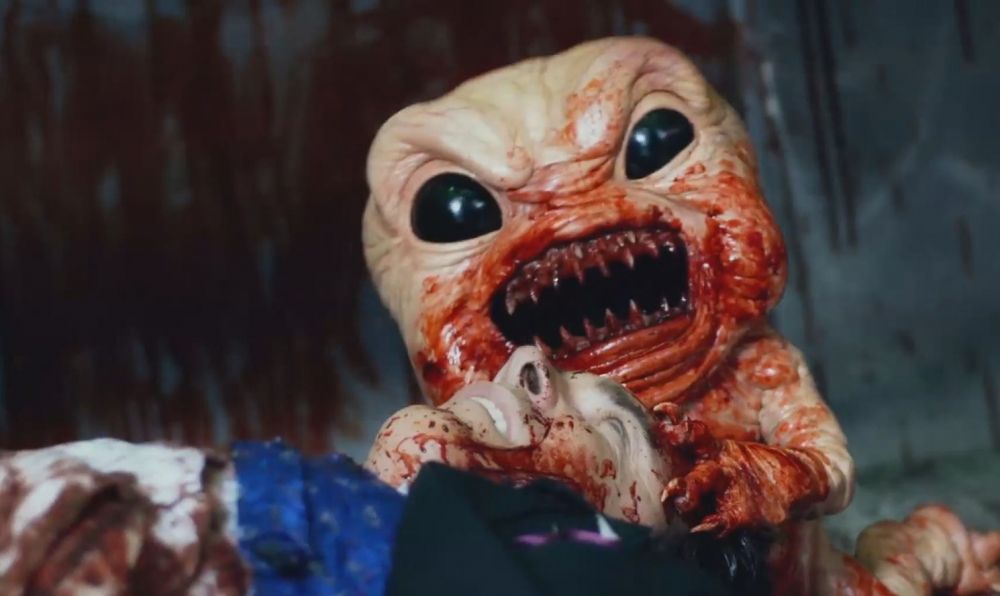 Frightfest has relocated from the Empire Leicester Square to the Vue Leicester Square, which seems to be a good thing. No more cramped Discovery Screens, we now have the run of numerous larger screens over several floors. And it’s even nearer Burger King, where I sit with Dave eating a Whopper while watching Freddy Kruger standing outside in the rain, presumably still dry under the latex. Usually I’m on my own at these things and would eat more healthily (ie: nothing) but Frightfest is an exception and Dave has vouchers.

But I’m not used to fast food and do feel slightly malnourished. I even begin to feel that I can identify with Duncan, the hero of Bad Milo! (a sympathetic performance from Ken Marino) and his gut-related issues. An irritability of the bowel is the form his stress takes, and he has a lot to be stressed about – his new office at work is literally a toilet, and his Mum invites an obnoxious fertility expert to the dinner table to grill him about his failure to produce grandchildren. Eventually, a lengthy and painful session in the toilet uncovers a critter who lives up his arse and who now emerges to begin killing off those who have irked him in some way. A racoon is blamed for these deaths, initially.

Duncan’s eccentric psychotherapist (Peter Stormare, amusing) is surprised and delighted by the appearance of this creature, explaining that it represents his repressed anger and encouraging him to ‘bond with it’. Which he does, at least to the extent of naming it Milo, though protesting that the creature – which goes from (comparatively) cute to savage in a baring of sharp little teeth – is ‘the furthest thing from a metaphor’.

Well, not quite: we can easily see Milo as an embodiment of Duncan’s qualms about fatherhood, and in a mock-soppy ending the rampaging Milo is finally declawed and sent, er, ‘home’ with the assistance of the hero’s wife, now pregnant. The ironic happy ending, in which Duncan gives a spiel to camera about his new business, intercut with scenes of a newly blissful family life, is not quite sharp enough for my taste (last minute twist notwithstanding) but neither is it enough to entirely wash the bad taste from my mouth, thank God.