BFI London Film Festival 2014: Hard To Be A God 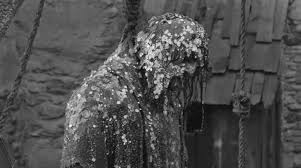 What better way to ease yourself gently into a film festival than with a nearly-three-hour black and white Russian film based on an sf novel I’ve never read? Aleksei German’s film (based on a novel by Arkady and Boris Strugatsky)  is set on a planet which has been colonised by humans but on which the Renaissance never happened – thus a primitive society on medieval lines is left (literally) floundering about in its own filth. Only the hero – a scientist from Earth – fortified by the fact that he is widely and erroneously believed to be a pagan god, seems to rise above it all. However, he becomes embroiled in a war between ‘the greys’ and ‘the blacks’, which proves to be his undoing. That’s what I think was going on anyway – it was hard to tell. There is a doctor he’s trying to find, and a group called ‘the Order’, which is just another name for the blacks, I think – and there’s also something about redheads I didn’t quite get. I would have played closer attention but I kept being distracted – by the film itself.

This is a film in which the background keeps straying into the foreground, and the viewer is constantly being caught off-guard by the sudden appearance of – say – an owl or a pair of ravaged buttocks. The dialogue seems to consist of non sequiturs; the air swarms with feathers. The plot has been trampled into the mud, and there’s a lot of mud. It’s a bit like watching a big painting where everything moves and figures occasionally look out at you from the canvas and mutter something strange or just pull faces. And there’s no use asking the director what’s going on – he’s dead.

His widow (who completed the film with her son) was on hand to give us an introduction. She warned us that half of the film is ‘setting up’ before the film actually starts, which had the effect of making me wonder throughout: has it started yet? (The only way I could be absolutely sure that it had started was when it had ended). She also advised us that this is a film you either love or hate – no in-between. Well I began by not really liking it very much and ended up really liking it rather a lot. I suspect that, somewhere in the middle, the film actually drove me insane.

At the end the hero plays (badly) his clarinet as he did at the beginning. The music (‘It makes my tummy hurt’, says a small child, which was the film’s one big laugh-out-loud moment) is accompanied on this occasion by a monotonous thud that turns out to be the sound of a man beating himself on his tin-helmeted head with a lump of wood (or something), all the while grinning ferociously into the camera. I very much identified with this man – that is roughly what this endlessly surprising, somewhat impenetrable, visual feast of a film did to me. Surely it has to be some kind of masterpiece.