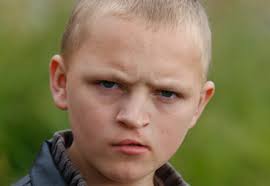 My jaw dropped when I heard that divisive auteur Bruno Dumont’s next film would be a comedy about cops, and remained in that state throughout the three-hour plus length of the film (actually a four-part TV series, served up in a single showing at the London Film Festival). Needless to say, Police Academy it isn’t.

One of the most remarkable things about it is how it manages to be recognisably the work of Dumont and laugh-out-loud funny at the same time. It’s a bit like L’Humanité played for laughs – that film was a controversial Grand Jury Prize winner at Cannes in 1999, and featured a strangely unworldly, Christ-like policeman. It drew criticism for its apparent ignorance of how a murder investigation works, but of course it wasn’t ignorance so much as complete disinterest. Here this utter scorn for realistic detail is used to comic effect, as the continually twitching Commandant van der Weyden (Bernard Pruvost) investigates the murders of people who have apparently been fed to cows. When he points out to his Lieutenant that normally cows are herbivorous, he is assured that these were mad cows. At which point the detective is reassured that they are, after all, ‘in the realm of the rational.’

Which they are not. The central character is a small boy (Alane Delhaye), the brattish yet fundamentally good-natured P’tit Quinquin of the title and this is (perhaps) what determines the tone – it’s a kid’s eye view of the adult world, in which the adults (often played by disabled actors) are buffoons engaged in absurd activities. Which means that, yes, you are being encouraged to laugh at – or is it with? – the physically and mentally disabled. And then there’s the racism, which drives one young man into Islamic-extremist meltdown – one of the episodes is entitled Allahu Akbar, a phrase with which recent events in Paris have made the general public more familiar. So yes, a comedy. But one whose confrontational aspects are thought-provoking, not just fashionably ‘edgy’. The funeral scene is among the funniest ever committed to film and makes you wonder if more funerals should be conducted as farces.

What next for Dumont? If you guessed: a rock and roll musical about Joan of Arc, then – at least according to Sight and Sound – you’d be right.