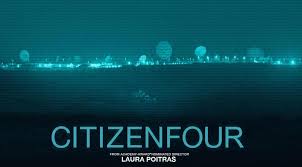 I hardly ever go to see documentaries because they’re about real life, and I can see that for free. But recently, every time I looked at the ICA website, I noticed that they were giving me yet another opportunity to see Laura Poitras’ film about Edward Snowden, as its run seemed to be extended indefinitely. It was as though something or someone wanted me to see it. So I went.

It was packed. Admittedly it was only Screen 2, which is tiny, but still – the film has been out for quite some time. I ended up sitting at the end of a row, not a position I favour, but it enabled me to see an audience member flicking a V at Julian Assange when he appeared. Just because you’re in favour of civil liberties doesn’t mean you’ll swallow any old shit.

It’s a film mostly set in a Hong Kong hotel room, in which National Security Agency employee (soon to be ex-employee) Edward Snowden – ordinary and likeable, as far as I could tell – sits on the bed and talks to the director and a couple of journalists about how we are all being turned into ‘metadata’. Occasionally the phone rings, and everyone looks worried. At one point, in a striking juxtaposition, the scene shifts to a street outside, where a big screen is showing Edward Snowden, staring out from the very same hotel room, talking. One irony of the film is that a man protesting against an invasion of privacy has to resign himself to losing his.

Another irony is that, although Snowden says that personalities are ‘a distraction’, he is very much at the centre of this. Some of the most gripping moments show him in fraught communion with his laptop, tapping away a response to his girlfriend, who he has very good reason to believe he will never see again. He is being threatened with some ancient piece of legislation called the Espionage Act, which makes no distinction between selling secrets to a foreign power and revealing unconstitutional acts in the public interest. Finally he actually has to go live in Russia, as many subversive elements in America have historically been urged to do.

This is film-making on the hoof – improvised, and (for a film set mainly in one room) exciting. And it wasn’t over when the film had finished – next day at work the headline on the Radio 2 news was about GCHQ’s use of NSA data being found to be ‘unlawful’, at least up until December 2014, when it mysteriously became ‘lawful’. I looked forward to some elaboration of what this all meant in the Jeremy Vine programme, but he had decided to talk about the Ukraine. To be honest, I could understand. Before I watched CITIZENFOUR the very thought of all those buildings full of harvested data, most of it mind-numbingly banal, filled me with an overwhelming apathy. It is tempting to think: well, if they really want to sift through all my stupid texts, good luck to them.

But we should probably remember that once upon a time your phone being tapped was cause for alarm – it was an exceptional and dramatic thing, like in a spy thriller. Now apparently everyone’s phone is being tapped, and nobody bats an eyelid. GCHQ were only criticised for using NSA data – however, according to Mr. Snowden, GCHQ’s system for monitoring UK citizens (Tempora, I think it’s called) is far more aggressive, and in fact the envy of the NSA, who would love to be able to get away with using it.

Over at my Mum’s on Saturday, I looked at the Daily Mail in the hope of gaining further insights into this story. But they were leading with something about flu jabs (waste of time apparently), and I found no mention of the (unprecedented) ruling against GCHQ until page 33, where it was given the kind of prominence normally reserved for apologies for ‘misleading’ articles in previous editions. It had thus been accorded less importance than, say, the question of whether ‘your’ calves (ladies) most closely resemble sweet potatoes or aubergines (page 15), or a picture of Tamara Ecclestone’s baby eating from a jar of Nutella (page 31) or ‘Army of huge rats heading for Swindon’ (page 21).

Of course the question is certainly being discussed at length elsewhere. My research has not been very thorough, partly because I’m reluctant to type certain things into Google in case They notice. But in a world where everyone wants to be a celebrity it’s hardly surprising if nobody’s too bothered about this kind of data-harvesting – perhaps there’s an underlying belief that it will lead to them being ‘discovered’ and uploaded into celeb Heaven. We’re still waiting for the next Edward Snowden though. Hopefully he or she will emerge before the giant rats get us.