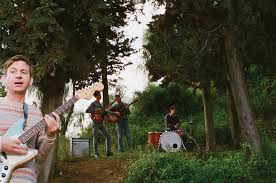 Showing at BFI Flare, Marçal Forés’ Everlasting Love presents a more plausible woodland cruising ground than did Alain Guiraudie’s overpraised Stranger By The Lake, even if this one does feature teenage cannibals. Forés’ last (and first) film was Animals, which featured Martin Freeman and a walking talking teddy bear – though owing something to David Lynch and Donnie Darko, it was fresh and striking. Everlasting Love is equally unusual – made for a late night horror slot on Spanish TV, its approach to genre is wayward to say the least. Had I encountered it unexpectedly on TV after midnight I’d have probably remembered it next day as a strange dream.

Essentially it’s about a middle-aged lecturer who frequents the above-mentioned woods, where he encounters one of his students. One fuck later he is already moving on, but the student wants more. That’s almost all there is to it except that the student has some friends whose idea of a picnic is far from innocent. To them, eating someone is not incompatible with loving them – quite the reverse in fact.

It’s a grotesque idea but quite a simple one. It is, however, obliquely told, and does not proceed in clear generic ‘beats’. In the Q&A afterwards, a man objected to the treatment of the first female victim, only for the director to ask: ‘What female victim?’ But it’s easy to see how a viewer might be led astray. An early scene in which a woman is dumped in the forest by her boyfriend, then dragged off by a unknown man, sets up generic expectations which the film does not, in fact, fulfil (the woman is being inducted into the cannibal gang, and the film’s first victim is the boyfriend who abandoned her), but you might be forgiven for not noticing, such is Forés’ roundabout approach to the story. We are not even granted the scene in which the man’s thoroughly-gnawed body is discovered by an early morning dog-walker. Instead, we see it in black and white in the newspaper the hero is reading.

The ultimate horror is not gradually revealed – it’s more like something we have unwittingly grasped throughout, and which emerges into full consciousness at the end. The film wanders like a walker lost in a midnight forest and it’s only at the end, when the title appears in blood-red splashes over the hero’s dangling skeleton, that it feels like the true horror film is about to begin – at which point we get an upbeat indie-pop number performed in the forest by some of the cast as the closing credits roll.

Such perversity edges close to genius. The most surprising thing about this film is that it works. It’s creepily compelling throughout, despite being so careful to frustrate the genre viewer’s expectations – though there were times when I wondered if Forés were aware that there is a horror genre at all. He even cites Denton Welch as an influence. I can see a shared theme of adolescent yearning but quite how he gets from an English writer of considerable delicacy to teen cannibalism is not so easy to fathom – but then that’s genius for you I suppose.

Though giving the impression of being rather meek and self-effacing generally, Forés clearly has a perverse streak, as is apparent when he suggests that the ending of his film – lecturer consumed by teen – is a ‘happy ending’, since life at the hero’s age is merely consists of ‘survival’ anyway. Cheeky bastard! Still, I look forward to whatever he does next – assuming I survive that long of course.