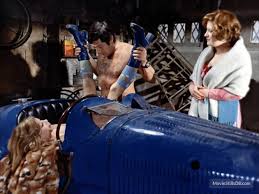 Marco Ferreri’s 1973 film La Grande Bouffe has airline pilot Marcello Mastroianni, chef Ugo Tognazzi, TV director Michel Piccoli and judge Philippe Noiret gathering in Noiret’s old family pile to indulge themselves in hedonistic pleasures until the toilet backs up – and they die. This shocked people at the time and now it’s back to divide audiences and critics again thanks to Arrow’s restored print. Am I glad? Moderately.

In truth it’s more redolent of middle-aged torpor than outrageous excess. You can’t help thinking that Bunuel would have made a shorter, funnier film out of this material and Pasolini a more incisive one, but to criticise it for flabby self-indulgence would be to fall into an obvious trap – after all, flabby self-indulgence is what it’s all about.

That it doesn’t quite induce the ennui the characters suffer from is largely down to the cast, who succeed in putting a human face on the proceedings as they work their way through a terrifying quantity of food and a trio of prostitutes (who soon get fed up and move on). Their deaths have an pleasing irony – Mastraoianni the sex addict freezing to death, and Piccoli (the artistic, spiritual one) propelled into the abyss by an enormous fart. Andréa (Andréa Férreol), the schoolteacher who enthusiastically joins them, is an intriguingly ambiguous figure, somewhere between obliging male fantasy and Rubensesque Angel of Death.

If it lacks a certain vigour maybe that’s appropriate to a film about middle-aged men overeating. Perhaps ideally it would have evoked the existential terror, despair etc. that this kind of conspicuous consumption disguises – instead it amused me without ceasing to make me wonder just what the point of it all was. I also expected cannibalism and was slightly disappointed at the absence of it. Mind you, I felt like that about Notting Hill.

I saw this at the remodelled Curzon Bloomsbury, where the seats feel like they are going to give way beneath you before revealing that they are only adjusting to your form and are therefore, the height of luxury. Still no hand drier or paper towel dispenser in the men’s toilet though.