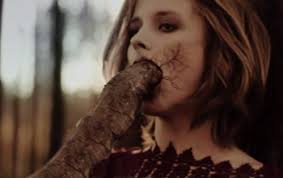 Raulo and Roberta (Luis Ziembrowski and Paula Brasca) are two unlikely siblings: a simple-minded hulk, he looks old enough to be her father while she is a pretty young thing barely out of her teens. But they fit into their isolated Argentinian community by performing their allotted roles – he chops wood and she services the sexual needs of the men (and at least one of the women). Their ailing yet formidable mother looks on with approval, having made the structure of this society and its smooth functioning her particular area of interest. Indeed, when she dies, the structure breaks down and the village falls apart gradually… then spectacularly.

The first film I saw at Frightfest turned out to be one of the best: director Valentin Javier Diment offsets black humour with real tenderness and so thoroughly immerses us in the atmosphere of this curious backwoods community that the horror, when it comes, feels anything but gratuitous. An excited Diment, who also plays the priest presiding over the village, was present to assure an oddly disappointed Alan Jones that this isn’t based on true events.

That was showing at the Prince Charles Cinema and so was this. Dave had never been to this cinema before and was alarmed by the sloping floor (sloping upwards, towards the screen) which made him feel like he was on an amusement park ride – ie: a bit sick. I’ve been many a time but it hadn’t occurred to me until now that the seats are numbered, if you can make the figures out in the gloom that is. Talking of gloom and obscurity, this film was Russian. Very Russian.

In another isolated village, this one beset by some kind of plague, a woman (Polina Davydova) enters her sister’s subconscious under the instruction of the village priest (who does a sideline in shamanism) in order to confront her demons and cure her of the sickness. There are three attempts, which could well be the reason for the title. Speaking beforehand the director Pavel Khvaleev alluded to a film called The Cell, which I at first imagined was some obscure East European art movie I’d never heard of, until I realised he must mean The Cell, that film in which (as I remember) Jennifer Lopez plays a maverick psychologist who goes into a maniac’s mind and physically rescues his inner child. This is a lot less literal-minded, to the extent of being a bit mystifying, but the visual style and brooding atmosphere carried me through just about.

As to what was going on, it was pretty straightforward up to a point, but beyond that point, murky. Dave thought the priest turned out to be the Devil, but God knows.

We Are Still Here

After two pretty unconventional Frightfest entries (both directors maintaining that their films were ‘not really horror’) it was interesting to be ‘warned’ by director Ted Geoghegan in advance of this that the film we were about to see was ‘very weird’. Perhaps if you’d been in the main screens all day this might have held water – but Dave and I felt we’d already seen true weirdness.

Still, you could see what he meant. Barbara Crampton and Andrew Sensenig play a couple grieving after the death of their son who move into a remote country house where something lurks in the basement, but what begins by suggesting that we are in for a quietly chilling ghost story then starts finding comedy in doom-mongering neighbours and the appearance of a visiting psychic friend and her stoner husband (Lisa Marie and Larry Fessenden). Another lurch in tone follows when the manifestations in the basement turn out to be surprisingly physical – the charred walking corpses of previous inhabitants – resulting in a fair amount of gore as the film pays its dues to Lucio Fulci (specifically House By The Cemetery) and John Carpenter (specifically The Fog).

I have to confess I never liked those films much. And the menace here is defused rather than ramped up by uncertainty over whether the the threat comes from hostile locals or the creatures in the basement. Then again, grief is a funny (placid or hysterical or violently angry) thing and something in this chaotic dog’s breakfast of a film remains strangely true to that, which means that it just about hangs together. Good performances help – notably Crampton’s. In the course of this weekend she has gone from someone I was barely aware of to fully-fledged horror icon – without consciously planning it I wound up seeing three films in which she starred. Not so Dave, who, after this, cried off with a blocked tear duct, leaving The Rotten Link at the top of his chart, and – for now – mine.