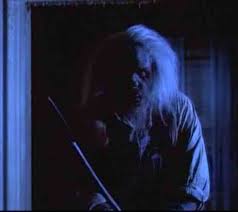 Don’t you just love a true story? This is the one about serial killer Fritz Haarman, who preyed (sexually and murderously) on young boys and drank their blood in post WWI Germany, and who also provided the inspiration for Fritz Lang’s M. Director Ulli Lommel was an associate of Rainer Werner Fassbinder so he looms large here. Indeed, he’s in it, along with a supporting cast culled from Fassbinder’s stock players (of whom Lommel was also one). And just as you’d expect if RWF was at the helm, the emphasis is on the killer’s place in the socio-economic scheme of things rather than on his lurid crimes.

So you don’t see much blood until the end. When it does arrive, this splash of red comes as something of a relief from the drab palette that colours this sordid world of poverty, petty crime and general mean-spiritedness – there is something vividly honest about it. In a sense, Haarman’s vampirism only makes explicit the way in which everyone trapped in this milieu is preying on everyone else; that his final assault is ‘staged’ by the police in order to catch him while the rest of the cast look on in horrified fascination makes perfect sense. He enacts their secret monstrousness. Even the woman who shops him (Margit Carstensen) seems to be getting off on his crimes in some perverse neurotic way.

While he kept their black economy going with meat of dubious origin and secondhand boy’s clothing the people around Haarman have turned a deaf ear to certain noises in the night, but in these last scenes he’s gone so far beyond the pale – snarling like a beast driven into a frenzy by the taste of blood – that it makes their petty crimes look, well, petty. Almost, they’re absolved.

Although it’s more complicated than that (Haarman was also a police informant), and the complexities of the situation are all apparent in Kurt Raab’s excellent performance as Haarman – you can practically see all those feelings (shame, defiance, narcissism, rage) squirming around like so many maggots under his pale skin. Uli Lommel went on to make a lot of horror films, including 1980’s The Boogeyman and its audacious sequel (which consisted, as I remember, largely of footage from its predecessor) but I’m not sure that he ever topped this.
Madman (1982)

Another re-release courtesy of Arrow Video, Madman also features a serial killer, but we are not encouraged to speculate about the inner feelings of ‘Madman Marz’, still less to assess his place in society. This farmer-turned-bogeyman merely clumps around the woods in his big bare (rubber) feet, growling like a bear and axing any teenager who gets in his way. Yes he has a back-story, but I’ve forgotten it, and it doesn’t matter anyway. The important thing is there are a lot of teenagers around, and something’s going to get them, and he’s that something.

You can call this formulaic and derivative, but at least it isn’t slick, which makes it easier to appreciate its blend of naivety and cynicism. Why, it even begins with a song! A horror-themed song, of course, sung around the campfire in lieu of a scary story, and featuring phrases like ‘the crawling stench of death’ (I think). Later in the film the heroine voices the opinion that the gruesome content of these entertainments might be unsuitable for the under-10’s present, and the guy in charge of the camp grudgingly agrees.

I rather thought this guy, who first introduces the topic of Madman Marz around the campfire, might be secretly donning rubber to become the Madman himself, but the film is beyond such tricks, which is refreshing in this post-Scream world of self-reflexive cleverness. These characters are quite unaware that they are in a horror film, and such fresh-faced innocence is to be treasured. As is Joe Giannone’s film, in which scenes of genuine tension alternate with risible sequences – such as a hot tub dalliance between hero and heroine that had the audience convulsed with laughter. So fun either way then.

Printed, rather than stitched together, by Danny Huston’s Dr. Frankenstein, this contemporary version of the monster – well played by Xavier Samuel – is a physically perfect specimen with the mind of a newborn. However, soon enough the rot sets in in the form of some kind of galloping acne, and perfectionist Huston opts to scrap him and start afresh. Managing to avoid termination, the monster escapes and suffers a few traumatic encounters with the outside world that echo incidents from Mary Shelley’s novel, eventually becoming just another homeless guy in a hoodie on the LA streets – not a bad idea, although didn’t I see it done already in a Dean R. Koontz TV movie?

Danny Huston (there he was) talked about director Bernard (Candyman) Rose’s ‘one-take’ (two at most) working method, but something about this cavalier approach works here, giving the film an energy that is true to Samuel’s visceral take on the monster. Meanwhile the voiceover narration taken from the monster’s account of himself in the novel forms a poignant contrast in its measured eloquence with the monster’s painful inarticulacy (even if, narratively speaking, it makes no sense).

Admittedly there are times when a more considered approach might not have hurt – one key scene towards the end is fluffed to the extent of provoking audience laughter – and the character of Dr. Frankenstein is sadly neglected: Huston offers the audience his idea of the Doctor’s back story as a plastic surgeon obsessed with perfection at all costs, and you wonder why that isn’t in the film. Still, Samuel’s enraged wounded man-child is impressive, and Tony Todd is engaging as the blind street musician who befriends him.

Bernard Rose (also present) assures us that this is the only film in existence just called Frankenstein apart from the 1931 James Whale version. Maybe he’s hoping this will be known to future generations as Bernard Rose’s Frankenstein. More likely it will be known as Xavier Samuel’s Frankenstein, since it’s his energetic performance that really galvanizes the thing. Or it just might not be known at all – when asked when this was going to be released, Rose quipped: ‘Never!’

Hey it’s Barbara Crampton again, and once more she’s on form, playing Irma, the woman putting heroine Janie (Sarah Hagan) through an eccentric therapeutic regime in order to cure her trauma-induced (I think) psychosis. Meanwhile, Janie, understandably weary of endless smoothies and having to stand on one leg for ages (not to mention some curious business with a tuning fork) escapes into sun-drenched LA to obsessively stalk a random woman (Sarah Malakul Lane).

This has just enough lack of detail to be interesting, creating a fascinating ambiguity around whether Irma is motivated by a desire to help, or by sadism, or by some weird mixture of the two. The performances are good, and the atmosphere of mental disequilibrium is powerfully conveyed by writer-director Ben Cresciman, aided by Matthew Rudenberg’s woozy camerawork and Boom Bip’s chilly electronic score.

The comparisons with Bergman’s Persona and Altman’s 3 Women that get bandied about in the Q&A don’t seem too wide of the mark. However, towards the end, as the film drifts into genre territory (abduction, murder) it feels like it’s squandering its potential, surrendering to convention rather than discovering its own path. Although the title is so far from convention that even the writer-director himself can’t explain it. Cresciman has a lot to learn – true auteurs should refuse to explain, not admit that they don’t know. But this film suggests that he’s getting there.