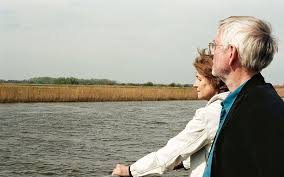 Tom Courtenay and Charlotte Rampling play Geoff and Kate, a couple in their 70’s who seem to think they are happily married until his ex-girlfriend Katya turns up, entombed in ice in a Swiss glacier and apparently unchanged since she fell into a fissure back in 1962. Wisely, director Andrew Haigh never shows us this Gothic image – Geoff only gets a letter telling him about it, and even that’s in German – but it makes itself felt, as though looming over the wintry Norfolk countryside where Kate walks the dog. It places a shard of ice in the heart of this marriage just as its 45th anniversary is about to be marked.

Dave Calhoun in Time Out called this a ghost story without a ghost but I prefer to see it as a science fiction tale in which a woman disappears down a wormhole in one century and emerges in another as a gleaming immortal, unable now to move, speak or even breathe, but still perfectly capable of inducing emotional havoc in a small English village many miles distant.

Her reappearance evokes parallel universes which entrap the hero and heroine in moody contemplation of how it would have been if Katya had lived and they’d never met (or at least never married) and undermining all their certainties (at one stage a character even contemplates what might have happened if the Norfolk Broads had been established somewhere other than Norfolk). Meanwhile, the spectre of climate change (first summoned by Geoff as he researches the melting of glaciers) seems to threaten some disaster as winds continually batter the couple’s cottage – unless, of course, the disaster has already happened.

OK I’m getting carried away. This isn’t much like The Terminator or any of its sequels (it’s more like James Cameron’s other big science fiction movie – Titanic) but it does have a faintly otherworldly atmosphere partly deriving from the contrast between the grotesquerie of the unshown image of the ice maiden and the texture of ordinary life.

Never trying too hard, Haigh’s film is sensitive to the frailties of old age – the fumbled attempt at sex, the vomiting in a layby after ill-advised lunchtime drinking – and attuned to the nuances of the central relationship (Rampling and Courtenay are both excellent). Time is evoked in all its slipperiness as both an illusion and a very real, and overwhelmingly destructive, force. This isn’t remotely showy or theatrical, which may disappoint people expecting fireworks, but in its quiet way it’s devastating. Best film of the year? I wouldn’t be at all surprised.