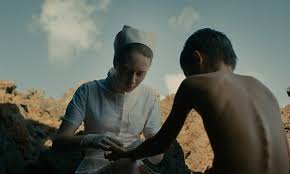 Not to be confused with a 2001 David Duchovny film I’ve never seen, Lucile Hadžihalilović’s second feature cranks the eeriness of 2004’s Innocence up a notch, coming on like an anxiety dream H P Lovecraft might have had as a child. On a remote volcanic island, a group of ten-year old boys are being raised in a village by the sea by a community of distinctly fishy women with suckers on their backs, who keep them fed on boiled seaweed and a black liquid they call medicine.

One boy, Nicolas (Max Brebant), finds escape from this dismal existence in swimming, but his ‘mother’ (Julie-Marie Parmentier) discourages this activity, especially when he claims to have seen a dead body on the sea bed. She says that he imagined it, but Nicolas isn’t convinced. Before Nicolas can get to the bottom of all this he and all his pals are carted off to hospital, despite not being ill, and things go from rather disturbing to quite unnerving as the line between medical treatment and horrifying abuse is blurred, and it becomes apparent that nature as we thought we knew it has undergone a weird revision.

Only by bonding with one of the nurses (Roxane Duran) does Nicolas escape the fate of his comrades and, finally make it into the outside world. Whatever that is. LH is not keen on too much ‘world-building’, and viewers are left free to knock themselves out speculating about whether we are in some kind of post-apocalyptic scenario, or on another planet, or whether tentacled Lovecraftian horrors lurk in the depths of the ocean. Or indeed, whether it’s all a dream.

As far as I’m concerned it hardly matters because the disquieting atmosphere, and Manu Dacosse’s striking photography, make it an uneasy pleasure to float suspended in a womb of unanswered questions. The film works as a bizarre coming-of-age tale, and a sustained nightmare that probes deep-seated male anxieties about female power – castration anxiety, as Freud would have it.

I’m wondering if that is why the most withering comments in the Q&A came from men: one man (who had obviously never seen any of the Human Centipede films) claimed to have witnessed ‘obscenities’. More eloquent in his own way was the guy sitting next to me, not that he said anything – he ran for the exit as soon as the film finished. Throughout it, however, he had been squirming in his seat, occasionally holding out his hand towards the screen as though begging it for an explanation.

Nobody mentioned feminism in the Q&A, which seemed like the elephant (or giant squid) in the room, but the film suggests that LH’s attitude to it is ambivalent to say the least: it may be the London Film Festival’s ‘year of the strong woman’ but it’s more like the afternoon of the strange woman here in the Vue Leicester Square, and I wouldn’t have had it any other way.