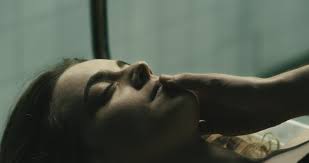 This showed (at the Vue Islington) in the Cult strand, but it deserves the widest possible audience. Struggling to get over the accidental death of his son two years previously, Will (Logan Marshall-Green) goes to a reunion dinner of old friends hosted by his ex, who seems to have gotten over her grief in no uncertain terms with the help of a new partner and a therapy group – or is it maybe a cult? An accumulation of small but unsettling details soon convince Will that something sinister is afoot but is grief distorting his perceptions – or sharpening them?

In this slice of LA Gothic, Phil Hay and Matt Manfredi’s script skilfully keeps us on tenterhooks right up until the end, and director Karyn Kusama exploits to the full the situation’s possibilities for paranoid unease and social awkwardness. Well performed, the film invites us to wonder what’s worse: succumbing to the blandishments of a mysterious cult out of sheer politeness, or spoiling the party. Is politeness, as the director suggests in the Q&A, ‘a form of insanity’? Beyond this there’s a sure grasp of the workings of grief, meaning that this is more than just a clever piece of superficial emotional manipulation. The chilling final revelation is the icing on the cake.

THE CORPSE OF ANNA FRITZ

The fact that I was sitting in seat L7 at the Rich Mix meant that their hit Pretend We’re Dead was nagging at me throughout this film – and not inappropriately, as it turned out. Three cocaine-fuelled lads find themselves in a morgue with the (pristine) body of an actress famed for her beauty – what’s gonna happen? You guessed it: ‘Pretend she’s drunk’ one lad advises his pal, who – initially reluctant – ends up agreeing that death is not the end of Anna Fritz’s usefulness.

But don’t worry, this isn’t a laddish lark out of Hollywood, some sort of misconceived vehicle for Zak Efron – for a start it’s Spanish. And it isn’t really about necrophilia either since, as in an adult version of Cinderella, our heroine (Alba Ribas) wakes up in the middle of the second assault upon her person. No: it’s rape, and from this point on, as the lads gradually come to the conclusion that it might be best for them if Anna Fritz stayed dead, this becomes more of a woman-in-peril story, as the half-paralysed heroine attempts to evade this fate.

The tone is nicely judged, somewhere between uneasy humour and horror, and if it slightly loses its transgressive quality as the more conventional suspense elements kick in, it’s still very well done, and its unflattering take on the male objectification of women feels uncomfortably true. However, I was left with a nagging feeling that it won’t realise its full potential until there’s a Hollywood remake featuring a well-known actress playing herself. Surely Angelina Jolie Pitt would be up for it? At the very least I’d like to hear it being pitched to her.