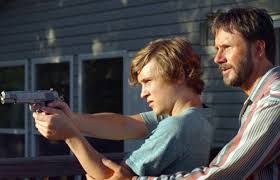 Not German for ‘nightmare’, ein nachtmahr is more like a thing from a nightmare, so the director – German artist AKIZ – tells us. In the case of his film that thing is a strange creature resembling a cross between Belial from Basket Case and Garfield, which has taken to haunting a teenage girl (Carolyn Glenzkow). This is naturally quite disturbing for her, even if it does little but mooch around her parents’ house consuming junk food. Nobody else can see it until, following her psychotherapist’s advice, she ‘makes friends’ with it: then, just as she begins to warm to the creature, it becomes visible to others, who are less friendly. Disgusted by the thing, her Dad tries to beat it to death, and then the authorities seize it – or do they?

AKIZ uses banging techno (courtesy of Alec Empire) and repeated shots of the heroine apparently being mowed down by a car to create an unstable reality in which the creature finally becomes the one solid thing the heroine can cling to. In the Q&A the director did not make the mistake of ‘explaining’ the creature but noted that people had seen the situation as a metaphor for bulimia or unwanted teen pregnancy.

Both of these work, but more specifically to the character the creature represents the soft, sad, needy part of a teenager who is trying too hard to establish herself in a cool crowd and wants to disown her vulnerable side. This sympathetic understanding works quietly beneath the loud and disorientating surface to create a striking vision of a world where ‘growing up’ may be more about resisting an overwhelming tendency towards fragmentation than slipping easily into a mature new self.

TAKE ME TO THE RIVER

Matt Sobel’s film has Ryder (Logan Miller), a gay teen from California, visiting Nebraskan relatives with his parents and finding himself caught up in a situation of seemingly endless and unfathomable social awkwardness that seems to spring from an ancient misunderstanding between his mother and her brother.

Initially causing a stir with his lurid red shorts, Ryder finds his stock falling further when he is more or less accused of having molested his young cousin Molly after an incident in the barn. He wants to come out to his extended family, assuming that this revelation will let him off the hook, but his parents feel that among these rednecks it might just get him hoisted up on an even sharper one. Then Molly’s Dad seems to have a change of heart, inviting Ryder to dinner – although it turns out that his hospitality is more unnerving than his rage. The scene in which he teaches Ryder how to use a gun blurs the line between the establishment of a bond and the corruption (or seduction) of an innocent. Not that anyone here is exactly innocent.

One audience member in the Q&A found the film frustratingly unresolved but I thought it captured that feeling common to (but not exclusive to) adolescence of having done something terribly wrong and not knowing what it is – except for the nagging suspicion that it just might be everything there is about you. This is ‘coming of age’ not as the dawn of a new understanding of the world, but as the realisation of how very little you may ever know.

In this Canadian offering teenage Oscar’s father (Aaron Abrams) is the kind of fun Dad who can easily get behind his son’s ambition to become a horror make-up artist, but is less readily able to deal with his emerging sexuality – and the departure of the boy’s mother doesn’t make things any easier. Perhaps this helps to explain why Oscar (Connor Jessup) has such a bad case of internalised homophobia that at critical moments he finds himself tugging an iron bar out of his own stomach. Such spasms of body horror sit uneasily with the rest of the film, since while director Stephen Dunn proves himself easily capable of handling familial angst and amiable quirkiness – the hero’s hamster is voiced by Isabella Rossellini – he can’t quite manage creeping dread. As the horror make-up implies, the weirdness here is only skin deep, and these manifestations from within don’t entirely convince.

But maybe this is apt in a film that is about the perception of homosexuality as monstrous – and for the most part, this confident debut works charmingly well. If the film doesn’t quite resolve its own contradictions it does resolve, more or less persuasively, those of its protagonist, in a climactic catharsis which employs the body-horror motif effectively enough and permits Oscar to carve out a new life in an artists’ colony. In allowing its hero to exorcize his demons Closet Monster goes to show that, whatever the above two films might suggest, ‘coming of age’ is still achievable in the present day. At least in suburban Canada.