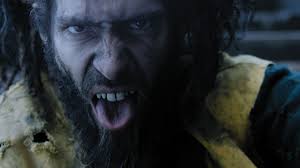 Raindance! It’s the London film festival I always forget about, tucked as it is into the gap between Frightfest and the BFI London Film Festival but in 2015 I made it to one lunchtime screening at the Vue Piccadilly. It was busy, chaotic even, in the waiting area outside the screens and something of a relief to get into the cinema proper, where the audience consisted of, as I remember, two other people.

A young woman did a very brief introduction, sounding like she resented reading out every word to such a small array of spectators – which was odd, because earlier we’d been entertained by her account of a disastrous night out, delivered to a colleague at full volume as they waited for proceedings to get underway.

Barbarous Mexico – no doubt they’ll come up with a better English title should this get a release – is an anthology of Mexican horror stories by 8 different directors, which sounds like a more interesting prospect than it turns out to be, though as is generally the case with these things, some stories are less crap than others.

The first story, Laurette Flores’ Tzompantli, suggests that the Mexican drug cartels have taken to using black magic, as if that would make them any scarier than they are already. I’m not sure that it does, so this seemed a bit beside the point.

Then, in Edgar Nito’s Jaral De Berrios we go back in time to find bandits taking shelter in a sinister ruin being haunted by a.) restless camera movements and b.) a female demon. The setting has atmosphere, but there’s nothing new here.

Which can’t be said of Aaron Soto’s Drain wherein a teenage girl smokes a joint she’s plucked from the hand of a corpse and is then visited by a stop-motion goblin who compels her to feed it blood from her Mum’s vagina or face having her soul sucked out through her anus. Perhaps this kind of thing goes on all the time in Mexican folklore, but it gave me the feeling that I was observing someone’s perverse sexual fantasy – creepy. Then again, creepy is good, I suppose.

In Isaac Ezbán’s That Precious Thing a couple of teenagers rent a log cabin in which to lose their virginity – or at least, hers. The caretaker warns them about local trolls who are notorious for stealing things but they aren’t that concerned if their flip-flops go missing. However, there is another precious commodity that can be taken, or at least lost – perhaps you have guessed it – and so it transpires that the girl gets gang-raped by the trolls, who also spew custard in her face for good measure. I had the horrible feeling that this was being played for laughs.

Also venturing into dangerous depths for shallow reasons is Lex Ortega’s segment featuring a young girl who is convinced that a grubby derelict on her estate is the boogeyman. Her mother reminds her that it’s what’s on the inside that counts – this is the episode’s title – but as it turns out the girl is onto something, as becomes apparent when the guy kills the girl’s brother, fucks his eviscerated corpse, and sells his organs. This last aspect of the case gives the episode’s title a bleak irony, but it all feels horrendously glib and cynical.

Jorge Michel Grau, who made above-average cannibal film We Are What We Are is the best-known director here, but his contribution, Dolls, is slight, though atmospherically shot in black and white. An island in a swamp whose trees are bedecked with damaged dolls draws the tourists in, but this is at the expense of kidnapped locals from whom, somehow, the dolls are made. This situation could have done with more teasing out.

Ulises Guzmán’s Seven Times Seven represents the film’s greatest achievement in terms of storytelling. There’s a pleasing irony to this tale of a man painstakingly bringing a corpse back to life through ritual magic just so that he can kill it again and exact a never-ending revenge. Some ropey CGI lets it down though.

Finally, Gigi Saúl Guerrero’s Day Of The Dead is a brief vignette in which various sleazy men are enticed into a strip club on the day in question and suffer a grisly fate at the hands of vengeful abused (unto death) women. At least this goes some way to giving women their due after the distinctly disempowering hijinks of That Precious Thing, but all told it’s not much more than a crude feminist revision of From Dusk Till Dawn.

The overall thrust of this film is to suggest that Mexico is not somewhere you would want to spend any time, as if it were financed by whatever the opposite of the Mexican Tourist Board is, and to do the film justice this did come across. But although there’s a variety of theme and approach here it’s more of a cheap package tour than a sampling of the authentic Mexican experience – too often the film seems to be aping the Grindhouse school of knowing exploitation rather than doing anything new or building on the rich tradition embodied in homemade classics like Alucarda (1975) or, er, Night Of The Bloody Apes (1969). And no sign of Santo the Masked Wrestler either. Disappointment all round then.