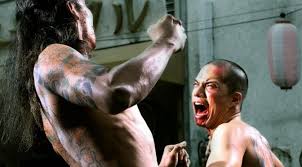 Hideo Nakata, director of the Ring movies and the excellent Dark Water returns with this theatrical tale that never comes to life – unlike the dummy being used as a prop in the play Ghost Theatre revolves around. The dummy’s head, you see, comes from a doll that happens to be possessed by a girl who died suddenly and hasn’t quite gotten over it – actresses are soon succumbing to hysterical fits as the dummy puts them off their stride with its own improvisations. The play is about the ‘Bloody Countess’, Elizabeth Bathory – in an echo of her legendary vampiric leanings, the dummy yearns to suck the life out of the cast, and proceeds to do so.

You can see how this might have worked. The heroine, Sara (Haruka Shimazaki), is a struggling actress first seen playing a corpse and praised by her agent for her ‘dying ability’ – her professional travails are nicely echoed by the dummy’s ambition to become a living thing. And the reverse is true too – Sara and the other actresses dreaming of being stars are longing to become something as fixed and unchanging as the dummy. Some thought – wit, even – has gone into this.

But somehow it all falls flat. The attempts at tongue-in-cheek humour undermine the horror, leaving the film looking silly. It should be aiming to make the theatrical cinematic, but the reverse happens – the film becomes as stilted and melodramatic as some creaky old play. Except in a few isolated scenes, it isn’t even terribly good at exploiting the uncanny possibilities of dolls, which is the horror film equivalent of shooting fish in a barrel.

Also showing at the London Film Festival (although I didn’t see it there, but at the Prince Charles more recently) was the latest from that other big star director of J-horror, Takashi Miike, whose own recent venture into theatrical horror, Over Your Dead Body, was rather more successful than Nakata’s. Yakuza Apocalypse, unlike Ghost Theatre, doesn’t fall prey to silliness – it enthusiastically embraces it. At one point in this film the hero is given an envelope from his dead yakuza boss which he and the audience might naturally expect would contain some information about what’s going on. It contains a blank sheet of paper. Later, judicious use of a flame causes words to appear on the paper, but all they say is: ‘Stay foolish’.

Proceedings suggest that this is Miike’s memo to himself. The hero, Kageyama (Hayato Ichihara), is turned into a vampire after being bitten by the severed head of the boss he idolised – preying on the locals, he turns them into vampires too, which rapidly undermines the authority of the yakuza, since it’s hard to manipulate people with no fear of death. Adding to the growing confusion is a turtle-like goblin and a knitting circle kept captive in a cellar, while the ultimate ‘modern monster’ everybody’s afraid of turns out to be a man in a frog suit, who makes up for his laughable appearance with his awesome fighting skills, but needs help going up and down stairs.

Then there’s the female yakuza with white gunk pouring out of her ear. ‘Is her brain melting?’, asks an underling. No, but you may feel like yours is.

Although it isn’t all unabating frenzy – Miike alternates the violence and absurdity with surprisingly effective moments of stillness. His intention, assuming he has one, seems to be to satirise yakuza machismo – ‘Take the “stupid” out of yakuza and there’s nothing left’, maintains one character, and he’s a yakuza himself so he should know… or not know.

At the end it all comes down to Kagemaya and another guy punching each other in the face, over and over again, a bruising reduction of machismo down to its absurd essence. Following this there is nothing for him to do but turn into a bat and fly off to confront the Godzilla-sized fire-breathing version of the frog monster now menacing the world.

Miike chucks elements of horror, the Western, the gangster film and the monster movie about like he just doesn’t care. And maybe he doesn’t – it’s hard to tell. But it’s nice to see that his subversive glee in overturning audience expectations is still in play.