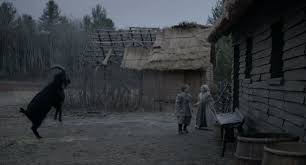 I saw this at the Odeon Covent Garden. Amazingly, they are only charging £6.00 a ticket at the moment for any showing Monday to Thursday. I hope this doesn’t get out, or my chances of getting an entire screen to myself (that ever-elusive dream) will diminish even further.

A member of staff handed me a little card encouraging me to express my opinion about various changes they’d made, and my experience in general, online. She gestured in the direction of one such change, the removal of the ticket counter and its replacement with three machines. It wasn’t clear whether I was meant to be outraged or impressed. In truth, I just felt numb.

I have expressed nothing online – unless this counts. Of course even if the ticket counter had been there it would probably not have been staffed. One is now used to having to purchase tickets at the refreshment counter or bar, something that always seems to devalue the cinematic experience to my mind. I don’t like popcorn.

But what can you do? Mixed messages abound. Ads encouraging you to visit the cinema are followed by ads for services streaming films directly to your living room. Go figure.

At any rate I could appreciate the ticket price. Indeed I was possibly so overwhelmed that I had only limited emotional capacity left with which to enjoy the film, which was a disappointment. Not bad, you understand, but more of a promising debut from writer-director Robert Eggers than a fully-fledged classic, whatever the reviews say.

The Witch has a family of early settlers in America, exiled from their community due to theological differences, falling prey to a local witch who snatches their baby. But is there really a witch? And if there is, is it closer to home?

Irritated by the unruly behaviour of her little twin brother and sister, teenage Thomasin (Anya Taylor-Joy) at one point impersonates ‘the witch’ to terrify them into obedience – but she’s only teasing, isn’t she? Similiarly the twins are seen to be consorting with ‘Black Philip’, a goat who whispers sweet nothings into their ears, but that’s just a childish game, isn’t it? These minor distractions become burning questions after the older brother Caleb (Harvey Scrimshaw) goes missing in the woods and returns naked, half-dead, and ‘bewitched’, and the parents (Ralph Ineson and Kate Dickie) start to believe that they are all cursed.

This plays all the right notes of paranoia, familial tension and supernatural menace, but not necessarily in the right order. Instead of immersing you so thoroughly in a world where the woods are vast, dark and uncharted that you’ll believe anything could happen, it keeps you at a distance with dialogue which, though doubtless authentic – some lines were apparently taken verbatim from an old folk tale – is a bit of a mouthful and leads to the characters delivering speeches rather than talking. There are fine performances (Kate Dickie is always good value, as she was in 2010’s Outcast, another flawed horror film) but the characters are too articulate to be true – notably in a scene where Thomasin delivers a blistering critique of her father that is just too considered for the emotional outburst it’s meant to be. I mean the teenager wasn’t even invented until the 1950’s – in the 17th century it’s a miracle she could speak at all.

An artier film might have made a virtue of the dialogue’s theatrical element – a more naturalistic one might have arrived at a compromise between the historically accurate and the everyday. But this is neither one nor the other. As for the horror, the ambiguous supernatural touches are sometimes very effective (a sinister hare in the forest) but sometimes less so (the sexy witch who seduces Caleb with an apple is frankly tacky). And using goats as objects of menace is always a risky business. Goats can go either way.

Mind you, the climax, in which Thomasin finally becomes a witch in what could be either the psychotic fantasy of a girl with nowhere else left to go, or entirely real, almost delivers the kind of emotionally devastating experience that makes distinctions between horror and drama (and between the supernatural and the psychological) irrelevant. Sadly though, the magic isn’t quite there.