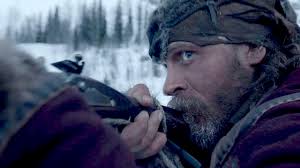 Early reports of this film had audiences scandalised by the sight of star Leonardo di Caprio being raped by a bear. Three times.

I suspect that this was hype worked up by the studio’s marketing department, but I suppose it depends on whether you think people are more likely to go and see a film in which the star is molested by a bear. In my case, definitely. I was suspicious of the five-star reviews, but that little detail finally tipped me over the edge and got me to see it, albeit late in the day at the Prince Charles (£4.00). Having done so, I see how the mistake could have been made. The bear makes some suggestive hip movements as it attacks Di Caprio; but it is a mother bear trying to protect her cubs, so it’s hard to see how a rape accusation would have held up in court.

But obviously there are no courts out here in the American wilderness, 1823. Alejandro G. Iňárritu’s film, with its grisly action sequences, crisply-photographed (by Emmanuel Lubezki) landscapes, and chilly, elegant score (by Ryuchi Sakamoto/Alva Noto) does a fine job of conveying the sublime indifference of nature, such a fine job that I too began to partake of this indifference. The plot has fur trapper John Fitzgerald (Tom Hardy) killing the half-Native American son of scout Hugh Glass (Di Caprio), leading to Glass, laid low by the bear attack, rising out of his prematurely dug grave in order to pursue him through endless privations. But is his revenge really all that important in the grand scheme of things? Why doesn’t he just lie back and let the cold seep into his bones?

That was the thing: The Revenant left me cold. Though perhaps it seems a bit churlish to say that of a film in which the protagonist has to hole up inside an eviscerated horse in order to keep warm. Part of the problem is that the main characters are so clearly designated as Good and Bad – amid the wide open spaces of the Indifferent, they seem cartoonish.

Witnessing Glass’s travails I often found myself thinking of Homer Simpson, attempting to jump a ravine on a skateboard and falling, and striking every possible rock on the way down – twice over. They have that element of the exaggerated, which the ‘based on true events’ tagline only serves to exacerbate. The whole thing feels like a ‘yarn’.

Which is not necessarily a bad thing – but if only they’d truly embraced the cartoonish. Maybe if Tom Hardy’s villain had been the one who had to suffer all the indignities undergone by Glass, the film would have worked better. It would have given our reactions an interesting moral ambivalence, natural human sympathy vying with a feeling that the character is getting exactly what he deserves. Plus it would have given the whole enterprise a sense of fun. Hardy would surely have made as much of a meal of his suffering as he does of his accent, which, though it has him confusing inaudibility with authenticity, certainly shows enthusiasm. He could have used it to narrate a voiceover account of his experiences: ‘…then a bar done molested me… then I fell in a tree… then I done lived in a horse…’ This is what Bruno Dumont would have done.

Instead we get scenes of Leo suffering nobly interspersed with thankfully brief mystical flashes which more than anything seem to signal Iňárritu’s wish to be compared to Tarkovsky. But then again he has been. So job done, I suppose.