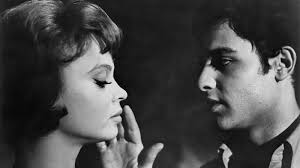 At one point in this the man who I suppose we’ll have to call the hero for want of any other more suitable candidate – Lt. Dave Madden ( Jan Murray) – is told that he has ‘crossed a line’. Well this film has crossed a line before it’s even started, as the credits roll over an out-of-focus, probably incestuous sex scene.

Witnessing her brother and (probably) mother in bed together is enough to make the young daughter (clutching her teddy bear) fall down the stairs, an incident which arrests her development so that the brother Lawrence (Sal Mineo) has to spend the rest of his life looking after her, relieving his frustration as he moves into adulthood by making obscene phone calls to work colleague Norah (Juliet Prowse).

They work in a New York nightclub where Norah figures as a blushing English rose assailed on all sides by Yankee perverts – if it isn’t the phone calls, it’s the punters, and if it isn’t them it’s her boss Elaine Stritch, whose protective interest in her soon turns predatory. Even Norah’s possible love interest – Lt. Dave – is a kind of meta-pervert, whose wife’s murder has left him with an obsessive interest in sexual quirks (and no qualms about exposing his young daughter to the fruits of his research).

Initially, Norah suspects him of being the obscene phone caller, though even the moderately-attentive viewer will have realised that the caller’s young, toned body, which we have been allowed to see as he lies on his bed making his calls, does not belong to him. Interestingly every variety of sexual peccadillo – even necrophilia – gets a namecheck here, except for male homosexuality, but the film more than makes up for this omission with its apparent obsession with Sal Mineo’s muscular, gleaming torso.

Mineo’s character, however, is straight, and his fine performance seems fuelled by a resentment at not being the romantic lead. It’s one thing to play second fiddle to James Dean, but 50-year old Jan Murray? I don’t think so. Though Madden’s interest in Norah may only be fatherly, and in a way Lawrence does gets the girl – by force.

This came as a bit of a shock, I must admit. Up until this point director Joseph Cates’ film has been pleasingly off-kilter, leaving you wondering whether it is struggling to master filmic conventions or gleefully upending them. Still I was convinced that the detective would save her in the nick of time – not so. The aftermath of the rape is the one scene that carries authentic emotional force because it is so understated, entirely lacking the hysteria that prevails elsewhere – Norah sits dazed, complaining of having lost her shoes and Madden, arriving too late, slaps an equally demoralized Lawrence, seeming more disappointed than furious to find his English rose plucked.

Earlier on, there was some doubt in my mind about whether we were meant to sympathize with Norah at all. Is she really as innocent as she pretends to be, or is her prim detachment from her surroundings a pose? Are we meant to be enjoying seeing her taken down a peg or two by NYC’s sleaziest? After the rape scene this no longer applies, assuming it ever did – there’s a feeling that a line really has been crossed.

(I’m reminded of Doris Day in Midnight Lace (1960), an atypical DD vehicle that places her in London, where she plays an increasingly hysterical heiress being terrorised by a squeaky voice that makes death threats to her out of the fog, and, moreover, plagues her with obscene phone calls. A couple of transparent red herrings – Roddy McDowall and John Gavin – notwithstanding, these prove eventually to come, and none too surprisingly, from her husband Rex Harrison. It should be noted that the red herrings are American, and the real culprit English. None more so, in fact – Harrison’s suavity remains wholly intact even after he is unmasked.

Quite why he chooses to torment his wife in such a weirdly elaborate manner is anyone’s guess, since he only wants to kill her for her money, not drive her insane, but that’s the English for you: they don’t do straightforward. However, Day’s most striking ordeal comes not at the hands of Harrison but from the police, who at one point force her to listen to a tape of obscene phone calls in the hope that she will identify the voice of her tormentor.

It’s hard to watch this scene without it being acutely aware that this is sunny Doris Day having filth poured into her ears in an officially approved manner by the authorities – it’s almost as though the English have captured her and are proceeding to torture her as punishment for being so annoyingly wholesome. Who Killed Teddy Bear presents a neat reversal of the situation and might almost be a form of retaliation – one which, like a lot of American responses to perceived threats, eventually goes too far.)

After the assault the film drops Norah like a stone – it’s as though she really has suffered a fate worse than death – and instead follows Lawrence as he runs out into the street and is then gunned down by a pursuing officer, though not before an odd psychedelic sequence in which he fantasises meeting Norah in a park. Though conventionally dramatic, this feels like an anticlimax after the powerful preceding scenes. The question of who killed teddy bear remains unanswered, but then again, it doesn’t seem to be a question, as there’s no question mark in the title. Presumably it refers to a loss of innocence. Norah’s innocence may or may not be fake but my confidence that the detective would save her now feels like an innocence I’ve lost; so I get it.

This film showed at the Barbican – with knowing inappropriateness – over the Valentines weekend (thanks to programmer Josh Saco, aka Cigarette Burns). Although I didn’t see it (it was a Sunday, the trains weren’t running, etc. etc.) this is what prompted me to buy the Network DVD from Amazon. I’m sorry to have missed the chance to see how an audience would react to this, but at least I get the DVD extras.

These bear hardly any relation to the film at all, except in that they involve Sal Mineo, who narrates a short film about the dangers of LSD (Insight – Or Insanity?) – though authentically stilted scientists do most of the talking. The use of science is presumably an attempt to avoid the moral hysteria of Reefer Madness but moral hysteria still bubbles up under the surface before finally erupting in the not-especially-scientific conclusion that taking LSD is ‘much like Russian roulette’. And we see a group of teenagers doing just that.

Mineo is presumably there as a sort of honorary teen, though his narration, at least at the start, is oddly detached as he presents an overview of teenagers (who range, as he helpfully points out, from young kids to ‘nineteen-year olds’) as though to a board of executives unfamiliar with the concept.

Mineo returns at the end to spell out the slogan the makers seem a little too pleased with themselves for having invented: that LSD is ‘a kick in the head’ – a kick, in the head, get it? In case you didn’t first time around, they end with a song to that effect, sung by Mineo himself.

The other extra is an episode of a TV series called Court Martial, featuring Peter Graves and Bradford Dillman as army lawyers in WWII. Here, Mineo is an explosives expert with qualms about blowing up a Nazi-occupied monastery in Italy. Graves is sent in to sort him out and eventually the monastery is blown up – art treasures, God, and all – though not by Mineo and at least everyone refrains from whooping, the tone being thoughtful (though not too thoughtful of course).

This mixed bag of extras maybe suits Mineo’s life, which never quite turned out the way he wanted and ended with him being murdered by a pizza delivery man who didn’t even know who he was. But, offering as it does all the kicks demanded by modern-day sleazehounds and ironists as well as something more, Who Killed Teddy Bear definitely earns a niche for his statue in my (as yet notional) monastery of cultural treasures.