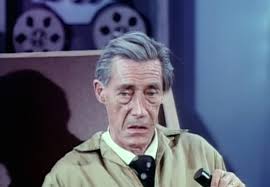 Sometimes all you need is a title – how can either of these films turn out to be anything other than disappointments? But this is the case with so much in life, and even before sitting down to watch them – in fact long, long before – I have already adjusted to this on some level.

Horror Of The Blood Monsters then – who are they, these ‘blood monsters’, and what is the nature of the horror they inspire? In fact they are vampire cavemen from a Filipino film, footage from which has been spliced into an American attempt at science fiction from director Al Adamson to create this mysterious hybrid.

As to the horror, it proves elusive. But never mind.

John Carradine leads an expedition into space that happens to crashland on a planet full of dinosaurs, dwarf bat-people and, of course, vampire cavemen. There are also some ordinary cavemen, engaged in a war with the vampire ones. Meeting a female one, Carradine’s colleagues offer to ‘do what they can’ to help but, in a surprisingly incisive take on US foreign policy, are really only interested in what the cavewoman calls ‘fire water’, but which they know as oil, something they desperately need to get their ship going again.

In all fairness to them their ability to intervene in the war of the cavemen is limited by the fact that most of the action on the planet is taking place in another film entirely. Existing at an even further remove from events, John Carradine, offering the film’s only real performance, remains on board ship due to a cardiac condition, issuing orders (‘Bring me samples of soil, rock, fauna and flora!’) and somewhat resembling the hero of a Beckett play struggling to impose some kind of order on fundamentally absurd events from the very basic spaceship set provided.

Most of the other (American) performances exude an awkwardness that hints at a profound existential crisis and the curious interpolation of a couple of scenes in which, back on Earth, two people from ground control have sex with the assistance of a beeping machine with lots of flashing lights only pushes the film deeper into the realms of the avant-garde.

In an attempt to create an otherworldly air various scenes are tinted in different colours (also a feature of other Filipino films of that time, such as 1966’s The Blood Drinkers). At one point the male half of the couple from ground control, explaining this phenomenon as ‘chromatic radiation’, actually demonstrates it by producing a ‘spectrum gun’ and using it to turn his lover and her immediate surroundings blue and green and yellow. What we are witnessing here is a bold, and wholly unsuccessful, attempt to knit two disparate films together – in an art movie it might be called ‘foregrounding process’.

Ben Rivers’ film The Sky Trembles… does this as a matter of routine. It was showing at the ICA. It is not beyond belief that the ICA would show HOTBM too – maybe it already has – but I saw that on a DVD acquired through an Amazon seller (thanks, ‘marvymark’) and thus did not have the pleasure of speaking the title aloud at any point in the transaction.

Neither could I bring myself to speak the whole title of Ben Rivers’ film to the guy at the counter at the ICA, restricting myself to the first three words, lest the interaction become awkwardly prolonged. Although directly after seeing it I longed to bump into someone I knew just so that, when they asked me where I’d been, I could recite the whole thing to them. It isn’t the kind of phrase you normally get to say in conversation, though Paul Bowles overheard it in a cafe in Morocco apparently.

This documentary-cum-fiction begins as an account of the shooting of a film in Morocco by director (and star of this) Oliver Laxe using locals, raising the usual questions about the impact of one culture on another, to slightly soporific effect I found. I think I was thinking all the things I thought the film wanted me to think about, but HOTBM expressed its own culture clash in a livelier fashion.

But it was lacking in horror, which TST is not, as becomes apparent when Laxe is kidnapped by bandits, has his tongue cut out, and is forced to don a costume adorned with tin can lids and dance for their amusement. Needless to say, this takes the cultural debate to a whole new level, as the artist becomes art-object, bought and sold, and gets to experience the authentic texture of the landscape in a way he never previously thought possible. An earlier scene saw Laxe driving around in his four by four, his stereo imposing the avant-metal stylings of Nadja onto his environment; later on, the shivery tinkling of the can lids, so much more suitable for these surroundings, seems to offer up a meek apology for this violation.

This second part of the film, an adaptation of Paul Bowles’ short story A Distant Episode, ends with our tin can man running screaming off into the distance like a character at the end of a Warner Bros cartoon driven to distraction by the crazy antics of Bugs Bunny. Though what has prompted this reaction is the sight of a TV screen showing a DVD on hold (the logo bouncing around from one side of the screen to another) – bringing him back, I suppose, from full immersion in his experience to self-conscious awareness of himself, as – what? A film director? A character in a film? What the hell is he now? We can only speculate. That’s art. It keeps us at a distance.

Though HOTBM keeps us at more of one. At the end of their adventure John Carradine and his crew bounce back, mostly unharmed. Yes, they have a deadly virus in their blood that is making the white corpuscles eat the red ones, but Carradine blithely assures those afflicted that this virus ‘can’t survive the Earth’s atmosphere’. It will, however, kill the inhabitants of the planet eventually. Oh well, it was their own fault, as – so Carradine glibly theorises – the planet was once a civilized society who misused their advanced technology, and destroyed themselves. ‘I’ve no doubt we will be equally brilliant one day’, he muses at the end, sly old devil that he is.

In spite of this attempt at social (or film) critique, the feeling you are left with at the end of HOTBM is one of indifference. It’s the Indifference Of The Blood Monsters. In essence, the inhabitants of one film have journeyed far and wide to discover another film which, despite being the product of a more ‘primitive’ culture, proves impenetrable. While Ben Rivers’ offering – which, being art, belongs in the category of films more usually thought of as ‘impenetrable’ – outlines the dangers of maximum cultural penetration, and in so doing unearths the horror the first film only promised us.

Then again these films have absolutely nothing to do with each other. We should definitely remember that. Their main connection is that they have passed in front of my eyes within a reasonably short period of time. And, as Paul Bowles and Ben Rivers suggest, even these two eyes may not be brothers. Especially if one is watching an art movie at the ICA and the other a trashy DVD at home. Nevertheless, here I am, stuck in the middle with you. And who the hell are you?