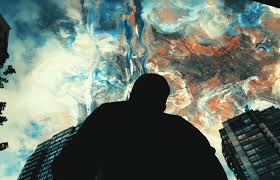 This year Frightfest disconcerted me by moving temporarily to the Vue in Shepherd’s Bush. I don’t like change.

As we sat in the Pizza Express near Soho Square beforehand, which is where we always go on Frightfest Friday, Dave tried to reassure me by showing me the new location on Google Earth. It was right by the station, so there was no possibility of getting lost. As it turned out the real thing wasn’t quite the same – the traffic was in motion – but the Vue was certainly hard to miss, and pretty big: though not so big, apparently, that the main screen showings weren’t largely restricted largely to pass-holders, which we were not. So we only attended the Discovery screens, with a faint sense of not getting the full experience.

After seeing a man with half a face crawling up the stairs at his holiday home, abstract artist Dan (Steve Zissis) decides to get a ghost expert in, who blandly reassures him that the haunting is ‘ambivalent’ and advises him and his family to coexist with it. Unsatisfied and frankly scared, he seeks out a second opinion from Os (Mark Proksch), a ‘ghost assassin’ recommended by a work colleague, who immediately and enthusiastically classifies his ghosts as ‘malignant’.

Dan is sufficiently impressed to set him onto them straight away, but as he spends time with Os it becomes increasingly apparent that just because ghosts are real doesn’t mean that those who deal with them can’t still have a screw loose. Os’ ‘ghost traps’ seem to be working – though who can tell? – and his odd little quirks (pretending his hand is a duck, attacking Dan) are surely just harmless, if annoying, eccentricities. But as Os grows increasingly obsessive, Dan begins to wonder if he was better off with the ghosts, ambivalent or otherwise.

Carson D. Mell’s film, basically a well-acted two-hander, shifts nimbly from the comedy of social awkwardness to the comedy of growing alarm to no comedy whatsoever, so that you never know quite where you are – which is a good thing, obviously. The death count is so low (zero, in fact – unless you count the ghosts, who were dead to start with) that Dave and I might almost not even be at Frightfest; but we are not disappointed.

Possibly disappointment does kick in here, but it isn’t the end of the world. Still, this film is described in the programme as ‘American Psycho meets Limitless‘ – I don’t know about you, but what that conjures up in my mind is ‘serial-killing superman’, which is not what we get.

Our protagonist Spence (Andrew Jenkins) is undeniably a psychopath, but no serial killer. His hobby is picking up rich women, getting them to trust him with the keys to house/car/heart, and then abandoning them, taking their valuables along with him – along with a trophy of purely sentimental value.

Then he takes some dodgy ecstasy, which brings on panic attacks, attacks which mark the onset of – gulp – emotions, a new experience for Spence. It isn’t a convenient time – he is currently embroiled, along with the mentally unstable brother of his latest flame (Melissa Roxburgh), in a plot to murder her tyrannical but very rich father, also a psychopath.

There’s certainly something appealing about the idea of a Frightfest movie whose ultimate terror turns out to be the possibility of empathy. However, Lost Solace, though stylish and well-played, does end up getting a bit, well, lost, perhaps because it doesn’t successfully play its elements off against genre expectations. Instead it ends up with two separate plot strands – the noir-ish family entanglement, and the medical investigation into the pill’s effects on Spence – running parallel to each other, with the latter strand not really going anywhere.

It’s also quite hard to represent anything quite as vague as human emotions as an outside threat. An abstract painting stolen from one of Spence’s exes is somewhat overused in this respect, as hands pressing against the other side of the canvas cause it to bulge towards Spence, and its patterns swirl in the skies above him – Spence also seems to have blue paint for blood. Mostly however, this assault of feeling has to play itself out by means of Jenkins’ facial expressions, and to be fair he makes a good fist of it, so that although the film sometimes seems poised on the verge of absurdity, it never quite goes over the edge.

Director Chris Scheuerman (present) was inspired by his own experience of panic attacks, and a psychotherapist in the audience praised the film’s mature attitude to mental health issues. I thought last year’s They Look Like People was better at incorporating this into a genre film scenario – although that film was maybe less likely to win unqualified praise from health professionals.

Death count: only one. And they deserved it.

Argentinian films have provided highlights of previous Frightfests – The Desert (subsequently appearing as What’s Left Of Us) from 2013 and The Rotten Link from last year. Laura Casabé‘s Benavidez’s Case is not quite up there with those – though Dave would definitely disagree in the case of the former, which he did not enjoy. When he saw the dread word ‘art’ mentioned in the programme description for BC, he didn’t think he’d enjoy this either, but luckily it isn’t art. In some respects it’s as dubious about art as Dave is.

Benavidez (Guilermo Pfening), the son of a successful artist, is trapped in an underground labyrinth by his psychiatrist, who is also an art dealer and seems to think Benavidez might have the makings of another master, once he has confronted the personal traumas which the labyrinth conjures up for him.

This left me intrigued but a little bemused until the ending, where it suddenly snaps shockingly into focus. It may be that it’s over-reliant on that ending – are Benavidez’s wanderings in the labyrinth building tension or killing time? – but if there’s something a little shallow, a little hollow, about that final shock, and the film overall, that does resonate rather neatly with its critique of the art world.

Dave was possibly slightly more engaged, declaring himself ‘freaked out’ by the talking paintings Benavidez encounters in the labyrinth – then again, he was also freaked out by those posters at the station advertising ‘eye-popping days out’, depicting cartoon kids with grotesquely enlarged eyes. And he was definitely right about that.

Death toll for day one: a mere two. And one of those offscreen. It’s almost disturbing.