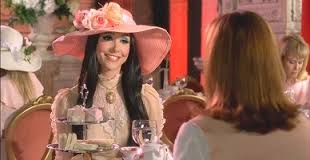 FURY OF THE DEMON

On day two I returned unaccompanied to Shepherd’s Bush as Dave had to get up early on Sunday, but another recurring character in this blog – Michael Blyth, BFI cult film programmer – was sitting nearby for the first two screenings, which was oddly reassuring.

I’ve no idea what he made of this film, which was not one of the high points of my Frightfest. The notion of the lost, cursed, mysterious film and the shadowy director is quite a potent one but perhaps more common in books than in films – Ramsey Campbell’s Ancient Images, Marisha Pessl’s Night Film, Theodore Roszak’s Flicker. Even this is not precisely a feature film, it’s a documentary, or mock-documentary about a silent film called Fury Of The Demon, which turns up every now and again to cause riots wherever it is shown, such is its strange effect on the viewer.

This film is initially attributed to pioneering film maker Georges Méliès – we get an overview of his life and work – but proves more likely to have been the work of a magician called Victor Sicarius, a far shadier character, so shady that one might even doubt that he really existed (he didn’t). We are told that he once filmed himself vivisecting a live fox, then stuffing it. It’s the kind of detail that’s almost improbable enough to be true – the kind of detail Fabian Delage’s film needed more of.

FOTD doesn’t quite manage to create a convincing air of mystery around its cursed film, and neither does it succeed in dazzling us with its self-referential cleverness. After a while, watching genre figures like Alexandre Aja and Christophe Gans offering theories to account for a phenomenon that never actually happened in the first place, you start to be wonder if the whole exercise isn’t a bit pointless – especially in these days, when any mystery can easily be cleared up by recourse to Google.

Maybe that’s what this is secretly about – nostalgia for the pre-digital days, for the heyday of the thing itself. At any rate the film passes the time (a mere hour) agreeably enough, and it’s always fun to watch clips of Méliès’ films. It didn’t start a riot though, and it never will.

This is also French, and even less like a proper film. I am often irritated to hear people say that cinema is over, and that TV is where it’s at nowadays, especially as this new kind of slow-burn TV that emphasises mood and character over plot borrowed all its tricks from arthouse cinema in the first place. But here I am at a film festival watching a three-part TV mini-series. Worse than that, I’m being entertained.

The three episodes aren’t even amalgamated into a seamless viewing experience, so I have six sets of credits to sit through instead of two – even then I’m not bothered, as I like the theme song. A woman, Lisa (Veerle Baetens) leads an isolated existence in Paris, inventing a husband simply to get her out of going for drinks after work. Then she inherits, under mysterious circumstances, the house across the road, which opens up her social life no end, since behind its walls waits a whole other, seemingly endless, house, whose rooms and corridors are populated by numerous lost souls and menacing creatures.

Any attempt to take advantage of all this extra space is, however, threatened by the awkward fact that once you get into this other house, you can’t get out – you can try to retrace your steps, but the layout is prone to sudden alterations. Nevertheless Lisa tries to escape, with the help of a First World War soldier (not a ghost, but a real person who accidentally penetrated this labyrinth back in the 1910’s) and does eventually make it out into what looks like the outside world, to a house by a lake in which her sister lives under the protection of the sinister Rose (Geraldine Chaplin).

It isn’t the outside world. Her sister’s dead, and appears here at the age she was when she drowned years previously – it is in fact Lisa’s guilt at failing to save her that has been blighting her life all this time. Any attempt to escape means terminating the family reunion – can she do it?

Yes, she can – somehow we never doubt it. Although it might very well have merited that kind of treatment, this isn’t one of those slow-burn ambiguous mood pieces I mentioned earlier. Unlike, say, The Returned, it’s less interested in losing itself in the mystery than in dramatizing its heroine’s confrontation with the buried trauma of her sister’s death and restoring her, bruised yet refreshed, to psychic wholeness at the end, with only the bittersweet romance with the soldier (who she must leave behind) to complicate things. Of course, they only have the three parts to work with.

I was oddly reminded of a good, imaginative children’s story in which, no matter how scary things get, there is never any doubt of a happy – or at least healthy – outcome: even the title suggests that this is fundamentally about Lisa’s escape from psychological exile, back into the world. Which is not to denigrate Beyond The Walls. Writer-director Herve Hadmar has constructed an edifice of sufficient complexity to keep us intrigued, and, helped by Baetens’ fine performance, this is moving too. Does anyone die? Well, yes. And no.

The death toll finally rises in this, the closest I’ve come so far to a conventional horror film. Though it’s nothing like a conventional horror film. Yes our eponymous heroine’s romantic aspirations do seem to result in the deaths of a lot of men, but this isn’t always entirely deliberate. She loves men, at least in theory, and seeks to lure those who catch her eye into relationships using her homemade potions, her natural charms, and her unambiguous willingness to abase herself at their feet. They just have a terrible habit of disappointing her, is all.

Writer-director-pretty-much-everything-else-as-well Anne Biller, creates an exquisitely artificial world that owes a lot to Hollywood melodrama – all ravishing colours and gorgeous fabrics (all costumes hand-sewn by the director). The performances are appropriately artificial too, with Samantha Robinson’s Elaine (the Love Witch herself) a stand-out, though Laura Waddell as her best friend (whose husband she poaches) is great too. The men are like stereotypical characters from 1950’s films, though apparently we are in the present day.

Whatever, it’s an enormous amount of fun for quite a while, just hard to engage with emotionally, possibly because the film doesn’t have a consistent take on Elaine – is she victim or monster, hopelessly deluded or massively calculating? I’m all for ambiguity and I can think of numerous good reasons why Biller might choose not to define her main character. But this uncertainty isn’t conducive to generating the kitschy thrills and chills the film seems to promise. So we are left with the surface – we’re just fortunate that there’s more to TLW’s surface than there is to most films’ depths.