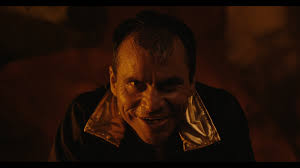 Or do I mean Day Four since I skipped Day Three? Oh what the hell. Nobody’s paying me to do this.

By this stage (Bank Holiday Monday) ‘not really horror’ (a term coined by Anton Bitel in a recent article for Sight and Sound online) seemed to be turning into a genre all by itself. And if they were giving out an award for Least Really Horror Film of Frightfest 2016 then this might well win it. Confusingly, Michael Borowiec and Sam Marine’s bittersweet US indie debut was also my favourite film of the festival thus far.

Willem (George Basil) is obsessed by the idea that the American government are keeping aliens in an underground facility – he may or may not be crazy, that’s almost beside the point. Any discomfort this film engenders derives less from the threat of aliens or government cover-up operations than from the uncertainty over whether our hero is a crank or not – indeed, from the high probability that he is. Despite which, he has his supporters – not just fellow cranks, but friends like geeky neighbour Todd (Andy Rocco) and waitress Flossie (Pamela Fila), who agrees to play his wife in the film Willem and Todd are making about Willem’s life in the hope of generating more interest in his beliefs.

It’s to the film’s credit that the makers don’t play this inevitably amateurish film-within-the-film for easy laughs, as they might well have done. George Basil’s restrained and dignified turn as the paranoid protagonist helps to ensure this, although all the performances are spot-on in a film that is perhaps more than anything about friendship and the allowances we make for other people’s peculiarities. It’s funny and moving and not really frightening at all. Which doesn’t matter in the least of course.

Does anyone die? I can’t bring myself to tell you.

WE ARE THE FLESH

As I was going into the screen for the last film of my Frightfest 2016 I overheard a man complaining that Man Underground had made them feel ‘too human’ and trusting that We Are The Flesh would correct this. I wonder if he was disappointed. Whatever WATF is (the acronym itself suggests a degree of bewilderment) it is no cynical gorefest. Namechecking Bataille and De Lautréamont in its closing credits this is a long way from a generic horror film, and more in the spirit of something like Catherine Breillat’s 2004 film Anatomy of Hell, confronting taboos in order to effect some sort of transformation, personal and political.

A young brother and sister in what seems like a post-apocalyptic wasteland fall into the clutches of a man with a perpetual unnerving grin (Noe Hernandez) who turns out to be not quite the sadistic torturer you expect but certainly keeps them on their toes as he uses them to help build a structure that is perhaps more analogous to a giant womb than to Hell on Earth. Though mainly it embodies an idea of interiority, a space like the mind in which unspeakable acts can be explored privately and ‘safely’.

At least, I think that’s what happened. Director Emiliano Rocher Minter creates such a persuasive spell that you imagine that he could put anything in there, and it would still work. Arrow Video were encouraging punters to give feedback on video immediately after seeing this, possibly because they wanted a good laugh. This is an experience that isn’t easily digested, but it was the most powerful one that Frightfest had to offer this year. And lots of people died – or did they?

One thing I can say for sure: if Donald Trump gets wind of this offering from Mexico (and wins the election) he won’t be able to build that wall fast enough. And the symbolic value of that wall will be nothing compared to that of this extraordinary piece of work.