The Woods Have Legs – Three Films 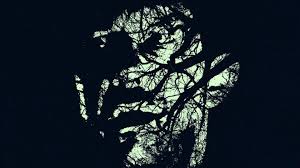 The woods! A simple enough phrase but so ominously evocative – I was quite intrigued on discovering that director Adam Wingard and writer Simon Barrett’s film The Woods was due to premiere at Frightfest this year. I found much to enjoy in Barrett/Wingard’s You’re Next and The Guest, and this title’s shadowy non-specificity was promising.

Then it disappeared from the schedules, only to return in cinemas as Blair Witch, which was way too specific. I really liked The Blair Witch Project, but always saw it as a one-off. I avoided this belated sequel until one afternoon I found myself caught between two London film festival showings and needed a diversion. And it was almost worth the £15.00 I paid (Vue Leicester Square) just to get a screen in the basement entirely to myself.

At least I thought it was to myself. There was always the possibility that someone had come in behind me, and that I would turn round to see – for example – a chainsaw-wielding clown. This possibility was far scarier than anything in the film itself.

The first Blair Witch had an authenticity about it that no retread could never match. But maybe this is the whole point of the film – to demonstrate the impossibility of achieving authenticity in a culture where people are forever filming each other. But at least this time around there is none of that awkwardness around the question of why the hell they don’t put the camera down and RUN, not in an era when you can easily mount a camera on your forehead. They even have a drone. (It gets stuck in a tree.)

The film retraces the course of its prequel just as its characters (one the brother of Heather from the first film) retrace the steps of their predecessors. They encounter strange noises, time-distortions, a pale thin shape, and a soupçon of body-horror. Considering the minimalist quality of the first film it doesn’t take a great deal to make this one seem overblown – here it is the possibility that there is nothing supernatural going on that requires a considerable suspension of disbelief.

The ending actually improves on the original, but the first film was one of the few found-footage horrors that managed to capture that most elusive of spectres: a sense of reality. But reality doesn’t do sequels or reboots – reality just isn’t that slick. This is.

(When it was over two people did appear in the aisle behind me, weirdly heading away from the exit. They looked dazed, and it was impossible to tell whether they had been there all along or had only just walked in – or indeed, if they really existed at all.)

Gilles Marchand’s film, showing at the Cine Lumiere in the London Film Festival, also has a sense of familiarity to contend with, but overcomes it, just about.

Two French brothers, Tom and Benjamin, go to stay with their father (Jérémie Elkaïm) in Sweden and find him in the midst of catastrophic mental breakdown. Young as they are, they don’t quite realise this at first, despite Dad’s refusal to sleep and insistence on taking them to work without checking with his employer first. But then (having quite possibly lost his job as a consequence) he transports them into the wilderness for some precious father-son time that grows more and more unnerving as it becomes increasingly clear that he hasn’t got a clue what he’s doing. Or, which could be worse, he does.

Complicating the scenario, Tom, the younger boy, who appears to have psychic powers, is haunted by a mysterious man with a hole in his face, a man he fears is the devil.

He isn’t the devil. I thought I knew who he was and I was right, but not in quite the way I expected. I had been fooled on some level into thinking I was on familiar ground. Psychic son, deranged father, remote location – Tom even looks like Danny from Kubrick’s The Shining. However, Elkaïm’s understated performance is the polar opposite of Jack Nicholson’s and his increasing absorption into a forest that has come to mirror the murky territory of his own psyche, and the helplessness of his sons as they gradually understand that their father may not be one hundred per cent reliable, are realised with compelling creepiness.

The ending is hauntingly unresolved – which is just how things should be, in the woods.

Eric (Alan McKenna), a land surveyor in a rocky marriage, goes to measure a mysterious nameless wood in Ireland, staying in a cottage whose previous occupant, obsessed by the wood, went mad. In the company of his young assistant (Niamh Algar), who is also his girlfriend, and a dropout (James Browne) living in a nearby caravan, he embarks on a magic mushroom-assisted midlife crisis with mystical undercurrents.

The profusion of ideas in Garrett Shanley’s screenplay – about identity, ecology and altered states as a means of communing with nature – recalls the work of Nigel Kneale, and if he doesn’t articulate them as explicitly as Kneale would have done, you are still aware of them working away under the atmospheric surface.

In fact, too much articulation would be beside the point: the furtive movements and whisperings of a wood, powerfully conjured on the soundtrack, suggest not only an encroaching menace, but the idea of the natural world as a repository of secret knowledge just beyond our conscious comprehension. Our hero loses his identity in the woods, with its webs of branches recalling a huge nervous system – nameless, the woods seem to stand in for the ‘true self’ that has been lost in the process of socialization, and which the mid-life crisis exposes. However, Eric does not seem to be ‘finding himself’ so much as falling prey to something vast, dark and unknowable.

At any rate, as the film ends, he isn’t out of the woods yet, and may never be. This is not for you if you like everything signposted – you have to find your own way to a certain extent, and even then you’ll probably still be lost. But it’s worth it.