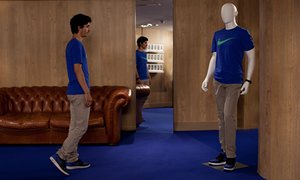 This London Film Festival showing represented my first visit to the Picturehouse Central. Entering, you feel like you’ve walked into a bar, and a busy one – and you have. Retreating in horror from all this socialising, which is not what I come to the cinema for, I eventually found my way to a familiar-looking escalator, presumably the same one that used to service the Cineworld Trocadero, which used to occupy the same spot.

Screen 1 was even more reassuring – very big, with comfortable seats that eased back with a satisfying click. I no longer felt that I should be talking to someone. Nevertheless a familiar face duly appeared – it was BFI programmer Michael Blyth, telling us that this is the kind of film that works best the less you know about it beforehand. I absolutely agree, and now I am going to tell you the entire plot.

Amat Escalante’s film is about some Mexicans having sex with an alien. The alien is kept in a remote cabin by some scientists, who operate a very selective door policy around its lovers – the ones we meet being two women, Veronica (Simone Bucio) and Alejandra (Ruth Ramos), and Alejandra’s gay brother Fabian (Eden Villavicencio). Although the tentacular alien is not what you’d call conventionally attractive, it is very skilled at lovemaking – despite which you can’t help but feel that its popularity says a lot about the generally unsatisfactory quality of Mexican men, especially as the alien’s lovers keep coming back for more knowing that sooner or later it tires of its sexual partners and hurts and/or kills them.

Bearing this thesis out, our main specimen of Mexican manhood is the inappropriately-named Angel (Jesus Meza), Alejandra’s husband – a guy who routinely sneers at his gay brother-in-law, while having sex with him on the side. It is indeed hardly surprising that both wife and lover seek solace in the extraterrestrial’s coils.

Escalante said that he considers all his films to be ‘horror films’, even if – like Heli – they are social dramas, and namechecked as a particular influence on this another film that I’ve always seen as a kind of horror film – Antonioni’s L’Eclisse. The main difference being that while Antonioni casts an alienated eye over the works of man, Escalato lends the natural world itself an inimical presence – hence static shots of the landscape carry a distinctly ominous charge.

This is the truly disturbing undercurrent of the film – though it holds out the possibility of escape from the world, it ultimately denies it because the alien offers no happy endings to its lovers beyond the orgasmic kind, and no escape but death. And at the same time, the film suggests that we don’t necessarily ‘belong’ here either.

The Untamed was possibly my favourite film of the 2016 London Film Festival (of the year even), but it had some competition, notably from this, Julie Ducorneau’s bruising, aptly-titled take on adolescence, centering on two sisters at the same veterinary college, the younger one, Justine (Garance Marillier), a nervous fresher, the older, Alexia (Ella Rumpf) almost scarily sure of herself.

Their relationship has its ups and downs. Alexia permits Justine’s vegetarianism to be compromised when she fails to save her from a hazing ritual in which she has to consume some form of unspecified meat, which sets off an allergic reaction. As part of an impulsive attempt to make up for this Alexia gives her sister a Brazilian, only to inadvertently cut one of her own fingers off. Instead of putting the severed digit on ice (well, there isn’t any) Justine takes the unexpected – and equally impulsive – step of eating it.

Surprisingly, her sister understands, having been subject to such cravings for human flesh herself. She has developed her own ways of dealing with them too, but since these include causing car accidents and preying on the resulting ‘roadkill’, Justine is horrified and relations between the sisters go rapidly downhill.

Vivid and energetic, this is one hell of a debut from Ducorneau, creating a world where bizarre and violent student rituals and unleashed sexuality make a little cannibalism seem not so much of a big deal (the brief but welcome appearance of Eurogothic veteran Laurent Lucas as the girls’ father only serves to normalize it further).

Rabah Nuit Oufella, who plays Justine’s ill-fated gay roommate in Raw, also fails to survive Bertrand Bonello’s Nocturama. another teenage (or post-teenage) rampage. Here he plays Omar, one of a number of young people who set about blowing up bits of Paris. Afterwards they hole up in a deserted high-end department store to don designer clothing and fret about the possibility that their actions might result in ‘shit comments’ on social media.

Such trivial concerns serve both to critique their exploits and explain the malaise that inspired them – in a particularly eloquent moment one of the kids confronts a blank-faced store dummy that happens to be dressed exactly like him. No specific group ideology seems to inspire these acts, though various possibilities are invoked, including Islamic fundamentalism – rather, it’s as if civilization will destroy itself for various unstated and possibly unexamined personal reasons. Or out of sheer boredom.

The director offsets this fundamental blank against the more thriller-like elements of the scenario with great skill, and there’s imaginative use of some unexpected bits of music (Shirley Bassey doing My Way, John Barry’s Persuaders theme). Bonello was on hand to explain that that the process of making the film began before ‘recent events’ in Paris. Whether those events will make the film a hard sell or a controversial hit it’s hard to say, but he is clearly onto something here – this is not ‘exploitation’.

(Though not necessarily a bad thing if it were of course.)

I saw this in the Embankment Garden Cinema, a ‘beautiful cinema’ (to quote the programme) specially set up for the 2016 festival next to Embankment tube. ‘Beautiful’ is going a bit far – the toilets weren’t beautiful (though not hideous either). It was an impressive structure though, the kind that supports you comfortably enough but a bit creakily, never quite concealing the fact that it is a temporary edifice – a bit like society itself maybe. I hope that it will be back again.