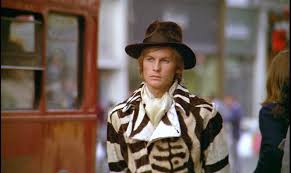 Ah, Valentine’s Day – my favourite feast day, since my single status means I don’t have to observe it. Nevertheless I was moved to recognise it to the extent of braving rail replacement services to get to the Barbican, where film programmer Josh Saco (aka Cigarette Burns) was showing this 1969 version (hitherto unknown to me) of Wilde’s tale as part of a brief ‘Twisted Valentines’ season.

Introducing Jonathan Rigby’s introduction, Saco said that he thought Massimo Dallamano’s version of The Picture Of Dorian Gray the best of them all. To which my response would be a very long-drawn-out hmmmmmmm. Though not an unhappy one exactly.

Rigby provided some alternative points of view from contemporary reviewers, who were not so keen. Superficially, the Dorian Gray story might seem a good fit for Swinging London; and superficially, it is.

The modern setting allows Dorian (Helmut Berger) to swan up and down Carnaby Street in some eye-catching outfits, indulge in a spot of cottaging, and even get his portrait’s canvas analysed in a lab, in case science can explain the mysterious changes affecting it.

Needless to say, science can’t, but why should playboy/model/celebrity Dorian care, when all the right magazines have got his picture on the cover? Not that picture of course, which while he continues to impersonate his youthful self, is up in the attic turning into John Carradine on a very bad day.

One problem here is that the concept of sin seems a little quaint in this era. So too do some aspects of the plot – Sibyl Vane’s suicide and Basil Hallward’s murder both seem under-motivated and melodramatic here, remnants of the old edifice that have not been fully integrated into the new structure.

Hallward, painter of the portrait, is played by Richard Todd, who would not have made a convincing artist in any era, but in 1969 forget it. Herbert Lom fares better as Lord Henry Wooton, and much of the entertainment here derives from his epigrams, which he freely admits are cribbed from Wilde – a rare example of a fictional character giving credit to his own creator.

Also forming part of the original structure we have Stewart Black as Sibyl Vane’s brother, who goes from husky young tar to salty old sea dog as he returns to seek vengeance for Sibyl’s death. Poking his head out of the shrubbery, where he’s impersonating a grouse beater, he looks oddly like East European philosopher and cultural commentator Slavov (The Pervert’s Guide To Cinema) Žižek, making one of his interventions into cinema. But before he can tell us what Jacques Lacan would have made of all this (which I would have quite enjoyed) he is shot dead.

This take on the Dorian Gray story may be a bit lacking in the anticipated (by me anyway) sleaze content, but we do get Dorian sodomising an elderly lady aristocrat up against a stable door, and a shower scene in which Berger is fortunate enough to be ogled very thoroughly by the camera in a way that rarely happens to male actors, even now.

Certainly there was enough fun to be had here to justify the trip. If this film is, as Rigby noted, one of those multinational co-productions known as ‘Europuddings’, then it has a curious texture – frothy and insubstantial, but a bit stodgy at the same time. I wouldn’t necessarily have it again, but it didn’t give me indigestion on the long journey home.