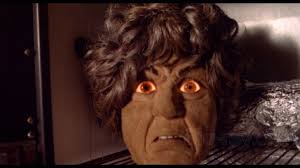 It’s a truism that when horror goes wrong it can easily turn into comedy – but what happens when a horror comedy goes wrong? Microwave Massacre, available on Arrow Video, provides one possible answer – a vision of Hell made all the more hellish by the awareness that somebody somewhere (possibly director Wayne Berwick or writers Thomas Singer and Craig Muckler) actually thought this was funny.

It begins with breasts jogging along the street – not on their own of course, they are attached to a woman. But this is a matter of small importance, as becomes clear when the woman is sexually assaulted up against a wall and those breasts, now unclothed, forced through a hole in the wall to the ecstatic delight of some construction workers, among them our hero Donald (old-school comedian Jackie Vernon). You don’t have to be a feminist to find this unfunny – in fact, this film could make almost anybody not laugh. But there’s more to life than laughter, as Microwave Massacre makes clear.

The sexual assault goes unremarked, even by the woman herself, which raises the question of whether it was an assault at all. In truth, it doesn’t matter: the woman is so much meat. This proves to be a theme, also signaled by the fixation on breasts, with their twin role as both fetish object and provider of nourishment.

The action is divided, broadly speaking, between Donald’s domestic life, where he is tormented by his wife’s ‘Cordon Blue’ cookery (Cordon Blue, it seems, differs from Cordon Bleu in its reliance on the microwave) and the building site where he works. Although the workers seem to consume more than they construct and the site more closely resembles some post-apocalyptic wasteland through which, weirdly, a lone woman wanders (in hotpants and high heels) like some forlorn mutant continually puzzling over her place in the scheme of things.

The construction workers are happy to provide clarification in this matter, even if the most muscular of them turns out – hilariously! – to be gay (he is listed in the menu-themed credits as ‘Le Fruit’).

But the film’s real thesis is that women belong in the kitchen, even if Donald’s wife May (Claire Ginsberg) is no great shakes as a cook. Theirs is a marriage of inconvenience in which the fundamental incompatibility of the two participants is brutally realised in the contrast between their acting styles – Vernon barely attempts anything that could be called a performance while Ginsberg seems determined to make an overcooked meal out of every single line.

Eventually Donald, driven to distraction by May – not to mention the fantastically awful décor – beats her to death and stuffs her into the industrial-sized microwave. And so the inadequate provider of food becomes a series of foil-wrapped morsels herself.

Tasty morsels too, by all accounts – or at least those of Donald’s co-workers, with whom he shares the resulting treats. Certainly tasty enough to encourage Donald to continue his culinary experiments with prostitutes who thus become – especially as he doesn’t even have to pay them for the sex he enjoys beforehand – the ultimate in convenience food.

Donald is by now so obsessed with convenience that even fast food isn’t convenient enough for him. At one point he and his buddies visit a drive-through hamburger restaurant to issue a series of instructions to the (unseen) female server (‘Let down your hair, unbutton your blouse, hike up your skirt, stick out your tongue – and a Coke’), then drive off chuckling. What follows is the film’s best joke, which isn’t saying much: we see that the woman has actually obeyed these instructions and in doing so has become, not sexy, but absurd.

This is the one moment in the film that approaches a kind of wit, implying an understanding of the gulf that separates men’s perception of women from the reality. For the most part, however, it is the deadly absence of laughter that characterizes Microwave Massacre – an absence which leaves us casting about for what else the film might be doing if it isn’t making us laugh. Maybe it’s a Fassbinderian depiction of domestic hell. Maybe it’s a Swiftian satire following consumerism and misogyny through to their ghastly logical conclusion. The fact that the hero is an increasingly psychopathic misogynist called Donald might even even suggest an interesting contemporary resonance.

None of which necessarily makes the film enjoyable of course. Nevertheless one is tempted to agree with the producer, interviewed on the DVD extras, who in striving to account for the fact that the film has managed to survive for so long asserts that there must be ‘something there’. There is. It’s just something unpleasant.

Finally Donald expires offscreen because the microwave has interfered with his pacemaker, a damp squib of an ending that only fails to disappoint because it is the ending, thankfully. However, there is a further twist as May’s still active severed head (eyes aglow) seems to have tinkered with the microwave so as to turn it into a deadly weapon. So there you are: it was a feminist film after all.