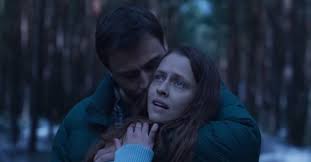 In 1987 sullen Australian teenager Vicki (Ashleigh Cummings) seethes with resentment at her mum, who has chosen to split with surgeon dad, necessitating a move to a seedier part of town – still, things could be worse, as she soon discovers when kidnapped by a sex maniac couple and chained up in their spare room.

Our maniacs, John and Evelyn White (Stephen Curry and Emma Booth), are not simply monsters. We understand if only from the way he struts into the bedroom where Vicki is kept, that John’s capture of her (and at least one ill-fated predecessor) is a pathetic way of asserting an authority in the domestic realm that he distinctly lacks in the outside world, where he is treated with contempt. Meanwhile, Evelyn’s participation is largely motivated by her love for him.

Beyond the obvious mechanics of the situation, there is a more elusive quality to Ben Young’s film as it plays on the tension between desire as inchoate longing and desire as the need to grab something and hold onto it. Depending on how you look at it, those ‘hounds of love’ could be barrelling through the woods after Kate Bush or chained up in the backyard, whimpering. Bush’s 1987 hit doesn’t feature on the soundtrack, which does, however, make memorable use of The Moody Blues’ Nights In White Satin and Cat Stevens’ Lady D’Arbanville.

The real hounds here are the puppy Vicki’s dad gives her, and the dog John and Evelyn own. Both, as Vicki comes to understand, are used to keep people – the puppy is her dad’s way of winning her away from mum (even though he doesn’t really need to) and the dog is given by John to Evelyn as a substitute for the kids she has had to abandon, but who she pathetically hopes will be allowed to live with them some day.

Both gifts are too-easy gestures that almost amount to demonstrations of contempt and Vicki is able to use this realisation in her bid to turn Evelyn against John. Though ultimately it may be the dog itself, with its infuriating (to John) habit of shitting on the carpet that proves to be the bone of contention that drives the couple apart and enables Vicki to escape, directly into her mother’s arms as it happens.

This scene implies that Vicki has come to understand and forgive her mother’s defection, and if there’s something a bit Hollywood about it, then this reminds us that film itself is another means of ‘caging’ desire. Although it’s grubby and unpleasant when it needs to be the whole film is shot through with a deceptively pretty nostalgia, slow-motion shots of lawn sprinklers seeming to turn even this low-rent suburbia into a lost paradise, to which, in spite of everything, we feel the need to cling.

Clare (Teresa Palmer), an Australian backpacker in Berlin, spends the night with Andi (Max Riemelt) a teacher she meets in the street and is sufficiently taken with him that she says in the morning that she wishes she could stay. As in a fairy tale, this wish comes true, but only because he locks her in the apartment and doesn’t let her leave. As is often said of marriage, Cate Shortland’s film (from Melanie Joosten’s novel) is no fairy tale.

Some reviewers have given this stick because the heroine is not as resourceful as, say, young Vicki, and accepts the situation too readily. But whereas Hounds Of Love is about desire this is about romantic fantasy, the fantasy to which Clare – however fleetingly – succumbs, only to find herself stuck in it. This is the story of many marriages, and this suggestion of an underlying ordinariness to the situation only intensifies the spell Clare, convincingly realised by Palmer, is under.

Perhaps the bigger question in quite why Andi would want an unwilling houseguest to come home to every night, not knowing what havoc she might have wreaked in his home in the meantime. But Riemelt creates a character who is plausibly buttoned-up over an interior one imagines to be neatly compartmentalized, even if he has never looked in some of the compartments.

When Clare does escape it’s (tellingly) through the destruction of someone else’s fantasy – that of a schoolgirl with a crush on Andi. This girl is already somewhat disillusioned by his abrupt dismissal of her when she turns up at his flat, and Clare is able to complete the process by inserting an incriminating photograph into her homework, which sends her to the rescue.

The setting has an obvious resonance as far as notions of confinement and escape are concerned (Clare has an interest in the architecture of Communist East Berlin, which she has been photographing) and the film ends with an oddly suggestive scene in which Clare, savouring her liberation as she leaves the city, closes her eyes as though to relish it all the more. It is as if she is sinking into the biggest romantic fantasy of them all – freedom.

In Virginia, during the Civil War, a girl out picking mushrooms discovers a wounded Yankee soldier (Colin Farrell) and takes him back to the other girls and women at her finishing school. ‘Is he dead?’ asks teacher Edwina (Kirsten Dunst) when he is dumped on the front steps. ‘Not yet’, says headmistress Martha (Nicole Kidman). That’s it in a nutshell really.

Farrell uses his Irish charm to charm and/or seduce his captors (to the degree suggested by their age/usefulness/level of attractiveness) and makes himself indispensable in the garden. However, the perils of professing your undying love to one woman (Dunst) and having sex with another (Elle Fanning as the most mature of the students, Alicia), all in the same house, soon become apparent and he winds up a captive again, minus one leg. Escaping from his room he makes a short-lived attempt to rule the roost before succumbing to a ‘good old Southern hospitality’ that takes the form of poisonous fungi.

We may be dealing with a caged man here but in Sofia Coppola’s version of Thomas Cullinan’s novel, previously filmed by Don Siegel as a Clint Eastwood vehicle, it’s clear that the women are trapped too, not only in the house as war thunders outside but in all the trappings of femininity as well. The film is atmospheric and picturesque, and almost creates a spell such as that which entrances Clare in Berlin Syndrome. But the sense of stifling gentility it evokes ends up stifling the film – the tensions beneath the surface do not seem to be seething as they ought to.

There’s a certain knowingness in Kidman’s performance that suggests that she might have gone the full Southern Gothic, given half a chance, but this impulse too is repressed in a film whose stays seem tied way too tight. In the end there’s more tension around the question of whether she can maintain that Southern accent (at times she seems to slip into Farrell’s Irish brogue) than there is around the plot, and when Farrell starts on his crutch-assisted rampage around the school there arises an element of absurdity which nobody seems to know what to do with.

When the women carry Farrell’s body out of the gates to leave it by the side of the road, there’s a sense that he has escaped, whereas they can only lock themselves in again. Still at least there’s one thing they aren’t trapped in, and that’s the male gaze. Not that it seems to do them much good.