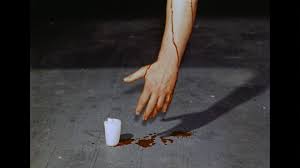 Outside the screen at the BFI stands horror film critic and musician Stephen Thrower (author of several enormous books on horror films which I would love to read if only I had the time – and money) next to a cake in the shape of a four-poster bed – though smaller, of course. It’s immediately clear that this represents the ‘monster’ in our feature presentation tonight: a bed that eats people. What isn’t so clear is why the cake is there – in all my years of visiting the BFI this has never happened before, not for In The Realm Of The Senses, not for Slumber Party Massacre 2. Later, however, it transpires that there is a simple, or relatively simple, answer: it’s the director’s birthday. Or it will be in a few days.

The director is George Barry, who speaks to us via Skype (or whatever) prior to the film. Although the Christmas tree behind him suggests an undiminished willingness to fuck with our minds, Death Bed was his only film. After years of trying to interest distributors in it he finally gave up, only to discover in the early 2000’s that it had a reputation, even though it had never left his attic as far as he knew – well except to visit the distributors, one of whom must have made a copy, and distributed it after all. So he had been ripped off, and yet he was an auteur because of it – it was hard to know what to think.

Hard to know what to think about the film too, a mixture of schlock horror, Gothic fairy tale and art movie with dollops of humour. I hesitate to say that it works, since I don’t know what it was trying to achieve in the first place. But it hangs together.

The bed languishes in an outbuilding of a deserted mansion with the ghost of Aubrey Beardsley brooding over it, stuck behind one of his own paintings. Their curious double act grounds the film, even if it only grounds it in the bizarre: he mopes and bitches about the bed’s lack of initiative and the bed – originally manufactured by a demon in order to effect a seduction that proved fatal to the woman in question – lies there belching yellow foam and dragging roses, chicken legs, and the cast down into its acid maw.

The shots of these ingested items suspended in amber liquid, dissolving, are oddly pretty and evocative. Evocative of what though? The corrosive effects of dreaming, perhaps (the film was inspired by a dream). Or maybe the perils of too much interiority (the first post-credits victim, an introverted woman whose thoughts we are privy to – evades her friends, who are making her uncomfortable, by taking a nap that proves fatal.)

As the sensitive misfit in the initial group of three, our first victim might be taken to be the film’s emotional centre, and therefore likely to survive longer than the others, but the film overturns – or is oblivious of – such conventions.

Similiarly there is a scene where another victim crawls away from the bed, trailing her useless bloodied legs after her. This seems to go on for quite some time, yet it has zero suspense because we have seen nothing to suggest that the bed is capable of pursuit. Then, just as she makes it out the door, it whips out some sheets to drag her back. In purely generic terms this is inept, but its perversity is admirable.

There is also the scene where the heroine – or perhaps I should say the female victim who survives the longest – dismantles her brother’s hands (which have been reduced to skeletal claws by the bed’s acids, leaving him otherwise unharmed) and throws them in the fireplace. You don’t see that every day.

In the end everybody dies, though according to Beardsley it’s more like a blessed release. I didn’t echo this sentiment as I left – this may look like a ‘bad film’, with its flat performances and silly concept, but it’s a genuine oddity that stays afloat in the mind like an idea that you can’t quite grasp, though it’s fun to try. Even better, the experience was not yet over.

I have to say that there is something profoundly satisfying about watching a film about a bed that eats people and then immediately afterwards eating the bed in cake form. It was like some kind of ritual, though perhaps less like a Satanic rite than a funeral where you don’t know anyone except the corpse (the napkins and the plastic forks were black).

I suppose I could have spoken to someone, even Thrower. But my mouth was full of cake. That’s the perils of interiority for you.

My only disappointment was that Thrower didn’t (as Barry had suggested) make the cake himself – it was made by ‘a specialist cake company’. Why, it might have inspired a whole new adventure in which I roam around assessing the baking skills of genre critics – Jonathan Rigby’s Victoria sponge, Kim Newman’s fruit cake, Anton Bitel’s sachertorte…