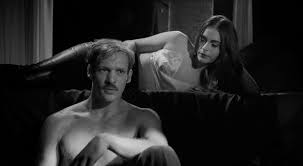 In the toilets next to NFT2 a man was calling out for someone called Antonio – he had been asked to do so by a woman outside. Antonio didn’t pipe up, although one of the cubicles was in use I noticed. Conceivably Antonio was inside – asleep, dying, or simply unwilling to acknowledge his presence for complicated reasons perhaps related to the woman outside. I will never know.

This was good preparation for the London Film Festival, whose films as ever (at least, the ones I chose to see) raised more questions than they answered, some to delightful and some to frustrating effect. My first day, neatly enough, offered examples of both.

Casting is a German drama set behind the scenes at a TV adaptation of Fassbinder’s The Bitter Tears of Petra Von Kant with the central relationship changed from gay to straight. Largely improvised, this still gives you the feeling of something structured – even intricately so. Perhaps this is an echo of Fassbinder’s rigorous approach, or perhaps it has more to do with the fact that they shot 80 hours of material and cut it down to 91 minutes.

In any case it’s still dynamic, playful yet acute. There’s a female director Vera (Judith Engel) whose refusal to make a decision around the casting of the lead actress comes to seem not so much ‘uncompromising’ as terminally dithering, and a male ‘scene partner’ Gerwin (Andreas Lust) whose essential disposability (he’s only there for the real lead actress to practice on) results in a journey from abject humiliation to seeming triumph when he’s offered the role of leading man – to abject humiliation again when he ends up with just one scene in which he has to deliver a package. He insists on delivering it for all it’s worth though.

The director Nicolas Wackerbarth was there asking if anyone could change a fiver: he was trying to buy a DVD in the BFI shop but he only had an old one and they wouldn’t accept it. I might even have obliged but I needed to run to the Vue Leicester Square for something called 9 Fingers, also in the ‘Dare’ strand of the festival – though ‘Risk’ might be a better name.

Paul Hamy doesn’t half get himself into some strange situations. Last year he was on a very odd pilgrimage in Portuguese film The Ornithologist, which resulted in him turning into the film’s director – here, like an actor without a script, he’s flung into a neo-noir scenario in which it isn’t entirely clear whether he is a victim of, or accomplice to, a group of criminals planning a robbery. That isn’t the only thing that isn’t entirely clear. Hamy and the gang end up on a cargo ship bound for ‘Nowhereland’ on which the characters exchange half-baked philosophical speculations and die of radiation poisoning in what is probably a metaphor for the last days of capitalism.

This might have worked as a cinematic dream in the vein of Raul Ruiz’s 1983 film Three Crowns For The Sailor, but the problem is not so much an uncertainty of tone as a mysterious absence of it. It isn’t funny, menacing, or even banal. It has a certain style (it won a Leopard at Locarno) but that only makes it feel like timid pastiche, a watered-down Guy Maddin. Hamy looks as bemused as I was. Diego Dória’s ship’s captain plays it far more broadly (‘Welcome to Hell!’ is his greeting to the boarding party) but still fails to catch the right tone. If there is a right tone. Which I don’t think there is.

After all if this film is authentically about the last days of capitalism, it is probably churlish of me to expect it to ‘work’. On that level it tells it like it is: nobody knows where they’re heading, the cargo ship has (it transpires) no cargo, and there is only the superstructure – which is sinking (literally or metaphorically, it hardly matters.)

The film is a pre-fetishized commodity – there’s nothing left to be taken from it, apart from some intriguingly offbeat cultural references (Hanns Heinz Ewers, Warner Oland). Even the ‘terrific electro-punk score’ that Jonathan Romney praises in the brochure is very sparingly employed. The ‘maverick’ director F J Ossang was, appropriately, not there.

The title relates, as I recall, to a criminal with the habit of chopping off the fingers of those who cross him, yet somehow I find myself relating it to the nine pounds I paid to see this. Maybe that makes as much sense as anything. I wouldn’t have been inclined to change a fiver for this director but given his feelings towards capitalism (which I may have invented) I don’t imagine that he would have asked anyway.