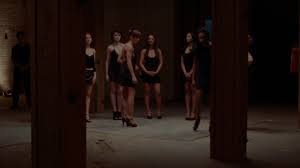 Up for the Sutherland First Feature Award was this South African tale whose hero Xolani (Nakhane Touré) returns every year to the countryside to become a ‘caregiver’ to initiates in a tribal ritual wherein boys become men by dint of such activities as wood-chopping and – crucially – circumcision. Although Xolani’s deeper reason for going is less traditional – it’s to reconnect with another (married) man, Vija (Bongile Mantsai), with whom he enjoys a clandestine sexual relationship.

This time around, however, Xolani’s initiate, Kwanda (Niza Jay Ncoyini), is an openly gay city boy with no qualms about explicitly discussing the desires Xolani and Vija enact in secret. Will tradition and marginalised desire be reconciled? John Trengove’s film keeps the question vividly alive and provides no easy answers. ‘What’s so important about a dick anyway?’, asks Kwanda towards the end; good point, but then again it has been rather the focus of the whole film, in one way or another.

The final shot is of Xolani heading into the city as though heeding the advice Kwanda gave him – to abandon his hopeless infatuation with Vija and seek freedom. But by this stage his need for freedom has become more than just a question of self-fulfilment.

Touré is excellent as Xolani and enormously engaging in the Q&A afterwards, where he says that it is easy as a city-dweller to live in ‘a bubble’ believing that everyone shares your progressive views on society and sexuality. This film, while certainly on the side of progress, is not afraid to let the bubble burst.

Also up for the same award is director Ana Asensio’s debut in which she also stars as Luciana, a Spanish woman leading a hand-to-mouth existence in New York after the death of her child. This impoverished but dynamic life is very well caught, as Luciana frantically juggles handing out fast-food flyers while dressed as a chicken with shambolic attempts at childminding.

It’s almost a disappointment when, after taking a mysterious but lucrative job at the recommendation of a friend, she suddenly becomes a static figure in a black dress and high heels, forced to just stand there while rich punters assess her and her identically-clad colleagues and place bets on their ability to survive a forthcoming undisclosed ordeal. We have now crossed over into genre territory (Larry Fessenden was the guy on the door) though some might think the ordeal awaiting our heroine, once revealed, lacks horrific impact, resembling as it does something out of I’m A Celebrity Get Me Out of Here, but with a bit more sex-and-death in the mix.

It worked for me is all I can say (being arachnophobic helps), and maybe it’s only because I saw The Wound just before that it seemed to me that this too was about a ritual – as though Luciana’s experience represents a kind of initiation rite, but one of the city rather than the country, an introduction to its hidden workings. Yet does it implicate her further in the city’s secrets or does it win her freedom from its devices? This is correctly left ambiguous.

The experience also gives Luciana a chance to atone for whatever it was she did back in Spain, although this back-story, never fully explored, comes across as a rather glib add-on to explain why an older woman would be living this kind of life. This does allow the director to take the lead role, which is the whole point of it, and she’s very good; and it is her baby. But I would have given the award to The Wound, which as it turned out is just what the award-givers did.